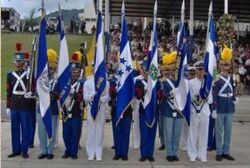 The complete armed forces of Honduras assemble, ready to surrender to any foreign power that might appear.

Honduras is a fairly small country. It is about the size of Tennessee, but has far fewer rednecks, and no Al Gores at all. Honduras is located in the southern part of the northern hemisphere and may border a few countries, here and there. The capital of Honduras is Te-coochy-coochy-ya-ya-ga-ga-voulez-vous-coucher-avec-moi-ce-soir-galpa.

For those without comedic tastes, the self-proclaimed experts at Wikipedia have an article very remotely related to Honduras.

Honduras is Spanish for depths. This name was given by Christopher Columbus, whose ships got stuck on the coast when he discovered the land in 1502 (the entire United States somehow not being enough for him). This led him to refer to that little pit-stop as "the pits" (las honduras), a name that, oddly, the nation has not been able to shake. 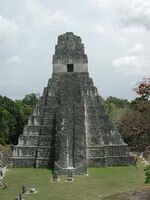 The Mayonnaise lived in pert little row houses that were virtually all chimney.

Honduras was settled originally by Native Americans, chiefly the Mayonnaise. The land is still littered with Mayonnaise ruins, especially those spent packets that come free with hamburgers. There are a lot of them famously strewn around near Copán.

The time of Mayonnaise dominance was unusually peaceful and prosperous, as there is almost no record of murder, slavery, and especially of beating hearts being ripped out of the chests of living children during religious celebrations.

Unfortunately, the Spanish eventually came along and mucked everything up, as they did everywhere else in the Americas. Columbus had claimed the entire country for Spain in 1502, but the Indians weren't buying, so in 1524, Hernando Cortes came along to seal the deal. Chief Lempira and his army of 30,000 were a particularly hard sell, but came around when the Spanish invited the Chief to peace talks, where they slit his throat.

The Spaniards taught the natives all about civilization, lessons consisting largely of oppression, repression, suppression, and, a dash of slaughter thrown in for flavor. After a while, most of the natives tired of their lessons, and resisted, primarily by dying, an act that successfully put an end to the Spanish mistreatment. With no others to oppress, the Spanish had little choice but to begin oppressing themselves. This has largely continued until today, with various Hondurans oppressing various other Hondurans.

No less heroic for being a total failure[edit] 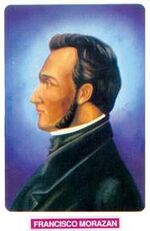 In 1821, all of Central America declared its independence from Spain and became part of a regional government called the United Fruit Company. Honduras provided its president, a man named Francisco Morazán. Four years later, however, Morazán lost much of his popular mandate, perhaps having something to do with the sudden death of the man who won that year's election, a death that required Morazán to be reinstalled by the Congress. At the eight-year mark, Honduras pulled out of this federation entirely and declared independence, a stratagem that stuck Morazán safely outside Honduras.

The entire nation closes up each October 3rd, although most of it had already been closed, to honor Morazán and his idealism and to forget his singular failure to put it into practice. Hondurans remember Morazán's valiant, if unsuccessful, fight to keep his federation united and put down a violent uprising in the capital (of Costa Rica, which he took over after he returned from Peru and Honduras declined his help fending off the British).

In 1887, Honduras renamed the district containing the capital as "Morazán." (The reader can imagine the outrage if a developed country used its capital to honor a past president.) And Costa Rica, the country Morazán invaded only to meet his own Maker at the unlucky end of a firing squad, has a park named after him in San José, with a swing set and ropes to climb, although that country spends its time fiercely guarding against the regional unification on which Morazán spent his life, desirous of keeping all its own corruption strictly local. One can still see the face of Morazán on the 5 Lempira bill, or at least, one could have, before the new series was issued.

Reform, and reform of the reform[edit]

In 1841, Ferrera became the first president of Honduras, beginning a delightful century of internal squabbles and wars with each of its neighbors.

In 1933, Andino became the country's first constitutional tyrannical dictator. He governed with an iron fist for sixteen years, during which time relatively little else went wrong, except World War II, and that was somewhere else.

Honduras butts up against Guatemaltecamango on the north, El Humidor on the west, and Funky Nicotina on the other side. Countries hovering but not touching it include Cosa Nostra and Panamania. Beelzebub, which also calls itself British Honduras, is in the vicinity but is nothing like it, nor like Britain.

Honduras has frontage on both oceans. Its access to the ocean to the west, the Pacific, is for some reason to the south, by the Golfo de Fonseca — that is, the Gulf of Fonzie — which is the only time Honduras and Happy Days ever appear in the same sentence. Likewise, access to the ocean to the east, the Atlantic, is to the north, via a region with the delightful name of the Mosquito Coast. This coast has a small number of railroad lines with which to get the bananas out, and up to the United States where they belong.

Inland is miles of uncharted jungle and swamp, the Tse Tse Hills, which make even the Mosquito Coast sound inviting. Further inland, the land gets bumpier and ridgier. Between the hills, one may find valleys; then again, one may not; mostly this depends on whether one looks for them. In the highlands, the weather turns from hot and muggy to merely warm and muggy.

To the south, there are some towns and a big bridge, which appears on the 100 Lempira bill (that is, the one two reforms ago, before the crisp new one with holograms).

There are many trees in Honduras. There are a lot of palm trees, some with coconuts growing on them. Coconuts are good, though most doctors recommend that people not let them fall on their heads, as coconuts tend to be heavy and rather hard. 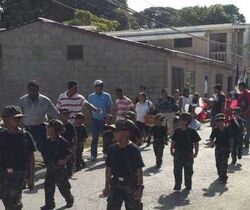 The arrival of the Good Humor truck is a signal of a new economic cycle in a Honduran town, which is typically greeted by mobilizing the National Guard.

The economy of Honduras translates to 450 trillion Lempiras, or roughly a double sawbuck. A single individual, named Juan Valdez, alone owns about $17 of that $20, and is planning to spend it near his new coffee plantation in Colombia.

Honduras' economy depends mainly upon bananas and banana-flavored narcotics. Bananas are even sometimes used as currency, especially between the recall of one series of Lempiras and the minting of the next one.

Flan is another export industry; it is obtained by open-pit mining across the country. Despite having abundant natural deposits of flan and other minerals such as lint and guacamole, Honduras remains relatively poor, due to the fact that 99% of the population went on a road trip to follow the Grateful Dead in a beat-up camper van back in 1976.

The government of Honduras is a "democracy", which differs from a traditional democracy (without quotation marks) in that its citizens only refer to it ironically.

The constitution of 1936 calls for the president to be elected for a six-year term. There is a one-house Congress, which counts the vote and announces the result, though they are chronically better at announcing stuff than at counting stuff.

If no candidate receives a majority, or if Congress cannot count at all, then Congress elects a president itself. But if Congress fails to perform even this duty, then the constitution provides for a transition to a brutal dictatorship interrupted by numerous military coups. This happened peacefully in 1954, and women wound up getting the right to vote, an outcome that proves the adage that things can always get worse.

Government has two major political parties, the Nacional and the Liberal. There are approximately 23,670 minor parties, some of which are so small they are still seeking their first member. The Nacional Party took its name from Cerveza Nacional (National Beer), which was the worst of the 4 beers made in Honduras, until they stopped making it in 2002. Unfortunately, Nacional Party politicians are still being cranked out.