Chile is a country on the sleepier side of South America, in the part of the continent referred to as the Coño Sur. Chile's length is 2700 miles from end to end, but its average width is about fifteen feet, and in certain places is actually negative. 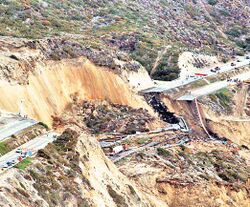 Chile has claims to various lands even when the land is somewhere else.

In addition to a long, narrow, and unmanageable strip of cliff land precariously perched above, and occasionally partly collapsing into, the Pacific Ocean, Chile claims territorial rights over all of the following:

Chile is as unable to defend these territorial claims as any other nation is to want to contest them.

Chile is uniquely upside-down. As well as organizing ski excursions in July but beach outings in January, one escapes searing desert for terrain with flowing water, trees, and occasional snow by traveling south. But one never gets far enough south to find a zone where Chileans don't wear sunglasses. 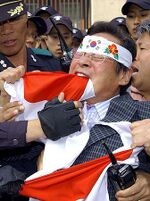 Asian-born Chileans often create the single star on the nation's flag by origami, using their teeth.

While neighboring Peru gazes toward the orient (mostly when trying to extradite an ex-President to put him on trial), and the rest of South America looks toward Europe (except for the continent's marriageable young women, who are already in the United States despite the expiration date of their visas), Chileans' eyes are fixated on their bank statements.

However, despite being named for chili con carne, waving a national flag that obviously is the flag of Texas (though Chile claims it got a few years' jump on the U.S. state), and dressing with spats and spurs and twirling lassos like good gauchos, Chileans insist they are not merely Texans. No one calls Chile the Lone Star State, almost no one shouts, "Remember the Alamo!" and George W. Bush is nowhere to be seen, nor any other member of a prior political regime.

Chileans are fiercely proud of their indicia, vandalizing pages on Spanish sister wiki Inciclopedia as a protest to that site's ridicule of the flag. Anonymous notes on the talk pages, thought to be those of Chilean folk singer Monteaguilino and Senator Pedro Múñoz, read only, "Don't mess with Texas!"

There is nothing in the colonial history of Chile that you didn't play out as a child in your backyard with the neighbor kids. The only issue was who had to wear the headdress. In order:

The wars are as follows:

The reader will notice that it is Spain's turn to "put up its Dukes." But Spain has withdrawn its colonizing forces from the continent entirely.

The exact borders of Chile remained unsettled for a long time. In 1902, Argentina and Chile settled on a border and erected a statue on the highest mountain peak between their nations, named the Kewpie of the Andes. It was not until 1929 that Chile got Peru to stop claiming the city of Arica as its own. There is no statue to commemorate this, probably because they never really meant it. Happily, "Guarantor Nations" administer these border agreements, in exchange for a small fee. This has limited all subsequent wars to more minor matters.

Chile is the only country with a Body Mass Index under 15.

Chile's government follows one of several different forms. The reader should not assign any importance to which form is presently in effect, because it might change completely after the next election. 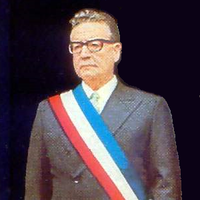 Left-wing strongmen resemble college professors — but they grade on such a curve!

Under the sporadic Marxist governments, all of Chile's property is held in common. Every Chilean contributes according to ability (which they all deny having) and takes according to need (which becomes contagious). Fortunately, a sprawling bureaucracy keeps this grubbing from dominating the country, by holding all the loot itself.

Trade treaties are signed with simpático governments like Cuba, North Korea, and Venezuela but (with the U.S. intercepting all radioactive merchandise) the only commerce is frenzied import and export of paperback propaganda booklets. When the loot runs out — because there are as few benefits of working as consequences of failing to work — the people try something different. 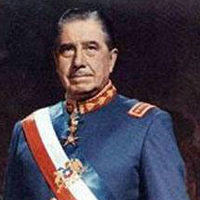 It was Reagan ambassador Jeane Kirkpatrick who made a distinction between "totalitarian" and "authoritarian" governments, but that was before she took a look at Chile, where both forms function with equal ruthlessness.

Under a right-wing Chilean government, the military men from Havana are replaced by Boys from Chicago, and the show trials and rural re-education camps are replaced by death squads. These do the same job but more finally and with a minimum of muss and fuss. A sick person without either money or a paid-up insurance policy is allowed to die on the sidewalk of the national capital. However, after he dies, his pockets will not be picked, because there is respect for private property. 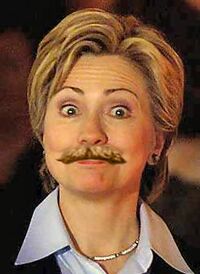 Feminazi strongmen wear the pants in the government.

Sometimes the electorate gets in a Michelle Bachelet sort of mood, in which it does not want to study party platforms and would rather gush about it being the Year of the Woman and how historic it would be if they broke traditional barriers. And then how historic it would be if they broke them a second time. So, as an alternative to extreme right and extreme left, one party wins by proposing extreme random. By breaking the barriers, it thereby gets a blank check to break a lot of other things, such as the pension system. 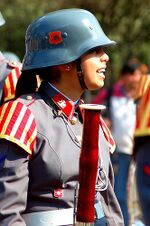 Chilean beauty contests replace the swimsuit phase with a competition to see who looks best in a military uniform.

In the event that the people vote to flip the government and the parting-on-the-lefts don't hand over power peacefully to the parting-on-the-rights, the Chilean armed forces stand ready to seize it all themselves, schedule new elections, and hand it back to the people gradually and perhaps under a shiny, new constitution. This is in fact the only function of the Chilean armed forces, as the fine Peruvian port of Arica is already safely inside Chile, no one wants to grab Tacna, Puno, or certainly not Arequipa, Argentina is preoccupied with wrestling over its diminishing national wealth, and as for Bolivia, "It ain't goin' nowhere" either.

North American and European tourists are told that South America's other coast is the lively one, and indeed the least boring part of an average day in Chile is going into town to count your money. The Chileans who attracted worldwide attention by being trapped in a mine for 70 days without contact with the outside world were actually pub-crawlers from Valparaiso, who viewed their captivity as unusually exciting.

Despite a wildly fishtailing form of government, utterly impossible territorial claims, and boring nightlife, Chileans face each new day in good cheer, secure in the knowledge that their mere existence denies every Argentinian a view of an ocean sunset.