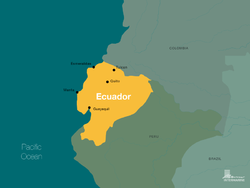 Ecuador is a small South American country (though way bigger than Belgium) but still insignificant, that has recently become the latest country to 'Gallo de la nariz' (cock the snook) at the United States for harbouring a known nusiance and Wikileaker-in-General Julian Assange. 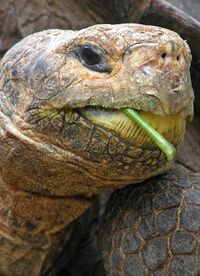 'I chased that Darwin fellow off my island. Viva Ecuador!'.

Ecuador is sandwiched between Colombia in the north and Peru in the south, and it likes it like that. Once home to the Mezzanine Americans, Ecuador was later part of the Inca Empire. Conquered and depopulated by the Spanish in the 16th Century for mining reasons, Ecuador was part of Peru. In the 19th century Ecuador favoured independence whilst Peru remained the last hold out for the old colonial power. This ended in the 1820s and Ecuador joined a new power block called Greatest Ever Grand Colombia. The Ecuadorians left this arrangement but then got set upon by Peru. Ecuador resisted and also got hold of the Galapagos Islands, prizing it off English pirates and Charles Darwin who wanted it as a nature reserve. Ecuador managed to stay out of all wars in South America and waited for tourism to make the country more interesting.

The country has gone through a regular cycle of democracy, corrupted democracy, Coup d'etat, juntas and finally economic collapse before starting all over again. The current president of the country Rafael Correa. He has aligned the country closer to the Uncle Sam Hate Club which now includes Venezuela, Bolivia and Brazil. 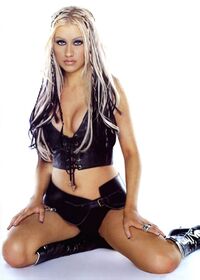 Ecuadorian...via her father. Christina would still look this if the had moved back to her fatherland.

Famous Ecuadorians are....well Julian Assange. Former 'Dirty' singer Christina Aguilera's father came from Ecuador but so far she hasn't made an album in Spanish for her folks back in the old country. I'll come back with the rest once I have found them. But seriously, the non-famous ones will do anything to clean your house, sometimes even pay you to let them do so. It gives them a sense of purpose. 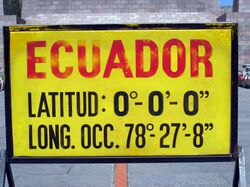 Roman Catholicism, Inca Ideology and Football. Ecuadorians like football, especially when played at home when foreign teams are expected to play up in the high mountains round the capital Quito. The Peruvians and the Bolivians like doing this too for their home games but Ecuador has a good national team so should play somewhere closer to sea level to make it fair. Although they do not openly admit it, the actual culture of Ecuadorians revolves around the fire, literally.

Other Countries that have similar names[edit]

In Africa there is Equatorial Guinea which is like Ecuador also a former Spanish colony. The two countries have been twinned since 2007, though what this means is anyone's guess.

If Julian Assange escapes from London and arrives in Ecuador, he will be allowed to rent a villa and carry on leaking secret information (except anything to do with Ecuador and any country deemed a 'friend of the President'.)

There is not much that can be said about their economy, if it can be called that. Let's just say that their economy has gone bananas. No wonder their women are always hungry.