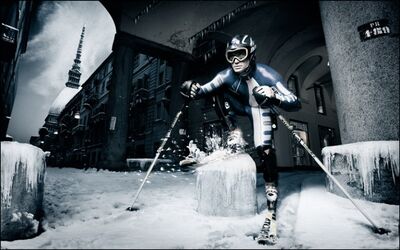 Skis in the Wild

The ski is an amphibious vertebrate of the surfboard family that has been domesticated for human transportation.

Individual Skis consists mainly of a flat lengthy backbone made of long chains of hydrocarbon molecules. A pair of skis make up one organism and if they are separated the skis will die. Skis do not have brains or any form of nervous system. They can see in infra red and flee from heat sources instinctively. It is a mystery how skis reproduce however many zoologists have speculated that they may reproduce asexually.

Wild skis are often found by the millions in either snowy or aquatic environments, often congregated around motor boats and ski lifts. As soon at it is born, a male ski will select a female ski from thousands of potential candidates and bond for life. Extreme caution must be exercised when approaching a pair of skis in the wild because of the male ski's naturally aggressive territorial instinct.

1) Go to a mountainside, the type of which is suitable for skiing, preferably being covered in snow. It is a good idea to wear foil as skis can detect body heat and instinctively flee from heat sources. Wear ski boots. For domesticated skis skip to step 4.

3) Creep up quietly behind skis. (Make sure they ARE facing the other way)

4) Place your boots into the indentations and the skis will fasten. WARNING: Do not attempt to pick up wild skis as they will whack you in the head and attempt to escape.

5) You have now mounted the skis. They may move quickly and erratically for a few minutes, especially wild skis, usually though they settle down through time.

Theoretical Origin of the Ski[edit]

Evolutionists of great faith fervently believe that today's modern skis evolved from the primitive skate (a species of poisonous cucumber that lived billions of years ago in the salt-laden seas of the Vlasic era). Scientific creationists, on the other hand, have gathered compelling fossil and genetic evidence that skis were created ex nihilo by David Hasselhoff in 1989.