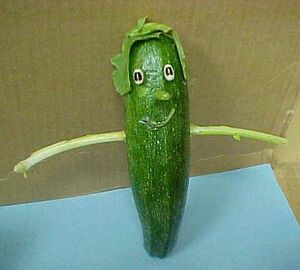 A cucumber in its natural habitat.

A cucumber is a small green animal that lives in people's bodies.

The word cucumber comes from the dutch word 'Komkommer'. The Dutch female word for a cucumber is 'komkommerin', which means come-on-in. so whenever you see a Dutch lady with a cucumber, it means that you will be welcome in her neighborhood. But if any Dutch lady you see is not holding a cucumber then it is best to stay at a safe distance. Cucumbers have wicked souls. They make rituals in your stomach when digested giving you a strange sense of goodness but after ward when they are ejected the natural way they give excruciating pain causing several ruptures and welts.

For those without comedic tastes, the so-called experts at Wikipedia have an article about Cucumber.

Cucumbers can be found in the center of the Earth, because they are very dry and thick. Napoleon discovered the first cucumber. It was red-skinned. He called them Indians. Later there were more discoveries: Hitler found one in his boot, and he currently has a cooked cucumber in a place where it would not easily be found.

Cucumbers are found anywhere it is warm, not just in the center of the earth.

Despite a delicious taste, cucumbers have a myriad of other uses.

Cows actually invented the cucumber, at a historic moment in bovine history. The cucumber was found by a tiny purple cow, who climbed into a tree and after he looked around a bit, he saw spirals everywhere! This may seem strange but makes perfect sense while people say this makes no sense no one really cares

Zucchinis and cucumbers engaging in full on, bloody, armed combat. What a terrible waste.

Aesthetically, cucumbers are almost identical to zucchinis. Having said this, they are a sworn enemy of cucumbers and have been a harrowing burden to the cucumber society and way of life since the beginning of time. They would steal valuable heirlooms from the cucumber royals, rape the cucumber children, sell cocaine on the streets of the cucumber cities and commit many other terrible deeds. Eventually the cucumbers reached breaking point and declared war on the zucchinis. It all ended in tears. Hundreds of billions of innocent human civilians were killed in the crossfire of the war, so they called for a ceasefire. Relationships have been sour ever since the war, but cucumbers and zucchinis have lived in peace ever since.