This is what the american government has been searching for around the world.
They have still come up with nothing.
Just think they would just have to ask their wives...

The DoD has featured in numerous TV serials since early 20th century. The most notable include - the DoD as one of the Friends (where the DoD got involved with both Chandler and Phoebe, had a child born to each), as the Goldfinger in The Gold and the Plentiful, as the killer of JR Eweing in Dallas, as the Dong in Mork and Mindy, the principal tool for toolgirl Lisa in Home Improvement, and much much more. The DoD had its first big screen breakthrough in 2002, when it was featured as the protagonist in Rape of Baghdad, (written Condoleeza Rice, Directed by George W. Bush, Edited by General Colin Powell, Music by Kofi Anan). 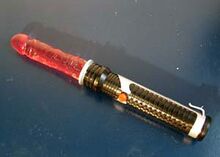 A group of experts from the underground weapons research center at the lovely island of Trinidad claims that the sabre is a direct spin-off from an ancient spanish talishman, of the same name, to preserve male virility. Other experts, led by Dr. Lindsay Lohan (better known as Saint Lohan) claim that it is actually a clone of the original cross.

Never joke about a Jedi's sabre, for the his father passed him its secret.

The Handle: The handle of the DoD is metallic and features a comfy hand grip to reduce discomfort while wielding the weapon. Imbued with Kryptonite[2], the handle is heat and Superman resistant, and adhesive to the user and/or Wonder Woman to prevent accidents and/or generate friction. When manhandled, the handle is susceptible to squirt about 15 litres of some sickly yellow colored gooey stuff primarily identified as Neptunian elephant saliva.

DoD handles has given rise to the famous street saying - "Handle with Care" - implying the destructive force of the handle when in wrong hands. Later, the saying was adopted by Oxfam to humiliate its primary enemy C.A.R.E in the now defunct advertising campaign - Handlers of Doom.

Moderately fragile at room temperature. Handle with care. The other side up.

There has been numerous attempts at replacing the Tom Cruise hologram with holograms of George W. Bush, Jenna Jameson, Yoda, Jesus Christ, and You Know Who. But, the DoD has shown amazing resistance to all such changes. The attempt that got closest to success had the Jena Jameson hologram bursting into a song about cows in the sky and the resulting rain of bovine piss.

Rub gently and use soft language. And, please, never mess with a Jedi. 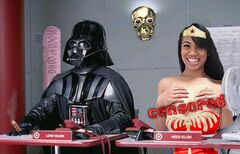 There are a few theories cooked up by sick brains in employment of Her Majesty the Queen of England:

The only available photograph of Spiderman, the Vulcan leader of Kittenazis without his mask.