New Mexico is the vernacular name for the region considered by a small group of people to be a separate entity from Mexico. 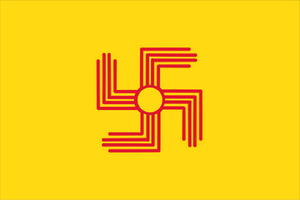 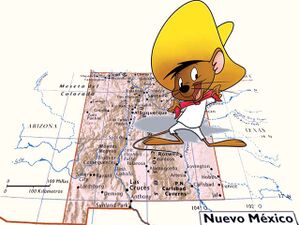 New Speedy, the fastest rat in the world, discovered New Mexico in the 16th Century.

The President of Mexico, Jose Juan Fernando Gonzalez ("JJFG"), made a bet with the governor of what is now New Mexico area in 1876. The bet was never revealed to the public, but it involved a flamingo, a whip, and a Richard Nixon mask. He lost the bet, left as he promised, and with the help of the police, created a meme that quickly spread--the concept of a "New" Mexico. The border is entirely mental in nature; there are no physical boundaries.

His followers insist that their state exists, and to prove this, have their Independence Day on the same day as Mexico. The only logical solution was a dance-off, and unfortunately, the dance-off has lasted until 2005. Mexican dancers have high endurance, and there have only been 3 on each side in the past 27 years. The event is so constant that it has become an innocuous, yet critical part of Mexican/New Mexican culture.

Unlike most Mexicans, the Olé dancers are very dedicated, very clean, and very capable.

In 1999, fearing Y2K, Billy the Kid moved to New Mexico. Having reformed himself, his plan was to run for governor and "Whip this place into shape!" Thanks to his army of thugs, he was able to garner a large amount of support and obtain enough funds to begin to run insulting commercials about Democrats. It looked like he would be able to obtain the position uncontested. The governor position had been empty for several years, as no one wanted to govern a useless Mexican state.

For those without comedic tastes, the so-called experts at Wikipedia have an article about New Mexico.

However, 3 months before the election, Billy encountered opposition. The famous New Mexican kid, international playboy Michael Kidblount, after having traveled the world in search of the fabled Golden Girlfriend had returned. He didn't like the idea of his state being taken over by some "criminal foreigner." He decided to run on the Democratic ticket.

Using the slogan, "If you are going to vote for me, don't make fun of me later," Kidblount was able to raise large support among the mother population of New Mexico, although none of them would even think of letting him near their daughters (or grandmothers).

At January 1, 2000 12:00 AM, Billy the Kid was found dead in his hotel room, the result of an apparent suicide. Later analysis determined that a bug in his trusty six shooter had caused the fatality.

Kidblount won the election by a narrow margin, but after discovering that citizens actually expected him to take the job seriously, bowed out. This left the position open, and Molly Ringwald arrived to take advantage. She was governor for 10 hours, but committed suicide after realizing that there are only three people (all male nerds) who like her and that her life was utterly worthless.

This marvelous event allowed the reign of 'King Bill Richardson' to begin. King Bill is a direct descendant of Sauron, founder of Santa Fe.

The New Mexico state mammal is the sloth. The New Mexican people view the sloth as a holy beast sent down by Jesus to smite the evil Julio Manuel Maurice Sanchez for unleashing a horrible plague of roadrunners many centuries ago. Every October, sloths are slaughtered by the hundreds and eaten raw by the locals because according to the bible, he who eats a sloth is eating Jesus therefore gaining his powers. Powers gained for eating a New Mexican sloth are the ability to drive a monster truck while under the influence of cocaine, super-human strength but only throughout your right ear, the ability to piss delicious beer called Corona.

The New Mexican sloth is noted as being a fierce hunter and often tracks, stalks, kills, resurrects and kills again many unsuspecting babies who dare to travel into the damp swamps of New Mexico. If properly trained they can make a good pets and can even do tricks.

New México's landscape is nothing but vast desert, with only a handful of nomadic, tribal communities. Water is scarce, and virtually no modern technology exists, save in extremely lucky portions of the state. Underground caverns do exist, but they are largely controlled by Drow Elves and are not suitable for most New Mexicans to habitate. The village of Santa Fe is considered to be the most prosperous, as it is populated primarily by wealthy kitten huffers who do not actually live amongst the natives, but only spend select seasons in New México when male prostitutes are at their cheapest. The only plant that grows naturally is the saguaro cactus, which has the amazing ability to survive without water, deriving all of the food that it needs by attacking and catching stray tourists and absorbing the moisture and nutrients they contain. Strangely enough, there are no Saguaros in New Mexico, as they are confined to the Sonoran Desert, which is in Arizona. None of this makes any difference to big-headed Texans, however, who think of both New Mexico and Arizona as part of West Texas.

The capital, New México City, is a remarkable city made entirely from over-stock copies of Tony Hillerman novels. Few people know that New Mexico even has a capital due to the vast number of nomadic casino cartels that roam its land. It also has a mysterious, navigational anomaly associated with it, in that any traveler who makes a right turn once reaching the city, will inevitably wind up at the wrong destination, thus only travellers who make a left turn have successful journeys.

New Mexico's national anthem is "La Cucaracha", by Sarah Brightman. Their national plant is a Cigarette Butt and the national animal is Magilla Gorilla (owing to a lack of real animals from which to select).

WARNING! Traveling through New Mexico during the winter months may be Hazardous to your health! Rest assured mile upon mile of utter nothingness covered in cold, blinding snow is all that will exist to appease your already paranoid mind.

We DO NOT suggest traveling through the heart of New Mexico (beginning on the Texas border and ending on the Colorado border) during the cold winter months without packing the following items:

Adult diapers & empty Gatorade bottles - There will be NO convenience stores, public restrooms nor homes that seem near fit enough to approach in hopes of finding relief for what seems like days upon days while traveling this eerrily vacant route. Practicing your sphincter and kegel contractions previous to embarking upon this disturbing journey is highly suggested.

Artists, libertarians, and hippies - Artists, libertarians, and hippies roam the wilderness, cities, and town of New Mexico. Its kind of like a strange plague, they are kind of hard to distinguish from one another, since they share the same watering holes and habits. Hippies tend to bathe less than the other two, libertarians usually use bigger words than the other two, and artists tend to describe things strangely well. Sometimes they blend, there are occasionally people that share two of the distinguishing factors. For example, if they describe things well and use big words they are a "libertarian artist". Another example, an unhygienic big word user would be a "hippie libertarian". A combination of the three is usually seen as a sort of prophet, ie Georgia O'Keefe.

Extra gasoline - Be sure to pack about 200 gallons of high octane fuel as you will not be finding anything that even resembles gasoline for quite sometime when using this route.

Flairs - Use these to literally scorch out the eyeballs of any serial killers you may encounter while traveling the frighteningly vacant highways of New Mexico. Use these sparingly as the serial killer count must certainly be high in such a region.

A Pillow - For your ass. As stopping the vehicle is not an option when there is literally no place to stop it.

Snacks and Fresh water - Bring these to curb the 7 day fast and dehydration fest you will be literally forced to undertake while on this hellacious journey. Due to a complete lack of any establishment that even begins to resemble a restaurant, grocery store or cheap taco stand along the way.

Be smart! and We do hope you Enjoy! your trip through New Mexico... Courtesy of the Texas Highway Patrol