Saipan is a small island in the Chamorro Sea. They love eating fruit bats there, a good example of bat **** insane behavior. 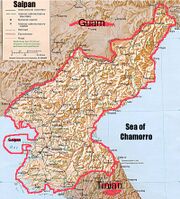 An officially recognized map of Saipan and surrounding areas drawn up, mostly in crayon, by Great Leader Governor Ferdinand Marcos and Dear Leader Lieutenant Governor Joseph "Erap" Estrada after a heavy night of drinking, based on a CIA map they won from Jack Abramoff in a game of blackjack at Tinian Dynasty Casino.

Saipan was founded over 5000 years ago by the Ayatollah of Iran. As soon as he arrived on the island, the natives stole everything he had, including his beer and condoms and copies of Hustler and Penthouse. So he named the island "Islas de los Ladrones", meaning "Island of that big white guy named Ladrone". In 2000 A.D. Colombian pop star Shakira was due to hold a concert on the island, but got lost due to the fact the pilot of her plane was Amelia Earhart. The relief she felt at not having to play a concert there was reflected in her song "Donde Estan Los Ladrones?" meaning, "I can't tell you how relieved I am, if I had gone there baggage handlers at the airport would have stolen my suitcase and my tiny lace thong panties would have wound up on eBay!"

The Native People of Saipan[edit]

The native people of Saipan were killed in a freak accident involving a can of SPAM and one of the aged power generators, a worker at the power plant was simply trying to open the can using an expensive piece of much needed machinery, slipped on a puddle of Tabasco on the floor (Tabasco is used as fuel for the generators) and electrocuted everybody local on the island who at that moment was sitting in front of a video poker machine feeding quarters, food stamps, babies and stray dogs into it. So the main population consists of out of work Chinese factory workers, prostitutes (or both), Filipina strippers, and Bangladeshi taxi drivers.

The word "Saipan" was intended to be a conglomeration of the words "SPAM" and "Spain" but just as the Senate staffer assigned to this task was putting this word together during his 4-hour long paid lunch break at the video poker arcade, the island was hit by the worst power failure in history, that sent Saipan back to the Stone Age and eventually led to civil war, unrest, looting, famine, and the eventual realization that things weren't so bad, tomorrow is the start of a 5-day weekend. And anyways, all the problems could be blamed on Palauans, Chuukese, Marshallese, Samoans, Filipinos, the Federal Government, and people from Susupe. So come on everybody, let's get CCCCCRRRRRRUUUUUUNNNNNNKKKKKKK!!!!!!!!!

The nightlife on Saipan consists of getting mega bombed on a couple of cases of beer then driving around the main roads of the island in a Totota pick-up truck (preferably one you "borrowed" from your neighbor while he was in your house smoking your weed and having sex with your wife, sister, brother, father mother, maid, and anything else that wasn't nailed down) and looking for Chinese garment workers to run over.

Swimmming in E coli infected waters down at the beach is always a lot of fun too. Bring the whole family!

For those without comedic tastes, the so-called experts at Wikipedia have an article about Saipan.