For the breakaway state, see Cheeselen.

Today Wisconsin is best known for being the place that all dairy comes from.

The people of Wisconsin are known as "Cheeseheads." Their love of cheese and all things cheese-like pushes quite a few of them to maybe the corpulent side of large. So large that they have been confused with Manatees. Just to set the record straight, DNA testing has confirmed that Cheeseheads are not, in fact, related to Manatees, the blubber-laden residents of the state of Florida.

People from other lands will often try to feed lost Cheeseheads who leave their traditional grazing areas. This is considered highly inadvisable. Feeding Cheeseheads causes them to associate others with food and they will thereafter hang out on the street corner outside your favorite coffee shop and shake a little plastic cup with a little spare change in the bottom of it.

Even though Wisconsin's most populous city of Milwaukee seems to swarm with people, there are remarkably few native Cheeseheads left in the city. Their numbers have dwindled following a huge influx of people from Illinois, known as FIBs, who have taken over most of Milwaukee. Illinois also officially annexed Milwaukee after years of squatting.

Wisconsin is most famous for it's vast Cheesium mines. These mines used to be the World's largest Cheesium mine in the world, So huge that Wisconsin's motto is eat cheese or die. Ironically, a new Cheesium vein has been found in California.

Many people mistakenly believe all cheese is made from fermenting milk, the way barbarians make it in other lands, but Wisconsin cheese is unique because it's quarried from cheesium mines. Cheesium was discovered by Eugene Ingqvist and his crack team of sandstone cutters who broke into the first vein of high-grade cheesium back in the late 1850's. Back then cheesium, like petroleum, was considered no more than a nuisance and left in the hot summer sun to rot and become manure which, as everybody knows, turns into cows, but Eugene's son, Gerdon "Stinky" Eugenesson, realized the potential for cheese as a food when he dropped his bologna sandwich in a rotting pile of it during lunch hour. Invoking the "ten-second rule" and blowing on it to get rid of cheesium germs, Stinky was first to realize that runny, warm cheesium has such a great flavor that he could get suckers to pay an insane amount of money for it if he gave it a French-sounding name and sold it in a fancy box. He was worth millions by the end of the week.

“Wisconsin Death Trip was an awesome movie! - So as Milwaukee, Minnesota!”

The most popular religions of Wisconsin include a variant of Catholicism called Friday Night Fish Fryism, and, most prominetly, Packerism. 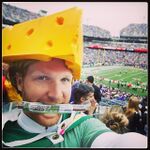 A Packerist acolyte in liturgical regalia

Packerism is local religion founded by someone who could not distinguish dairy products from headgear. The main god of Packerism is the "The Great" Brett Favre, who was brutally sacked by the Metropolis Romans. After a three minute break for commercials, the Great Farve resurrected the drive and threw the ball into the end zone for the Holy Touchdown.

Those with Blue and White are not despised, but felt sorry for. For there is no greater curse than to be a Lions Fan.

Some say that Packerism was debunked by the philosophy of Vikingism in early 2005, when the philosopher Daunte Culpepperus vanquished the Great Favre in his own megachurch. However, the Packerists will always have unshakable faith in the Great Favre, even until he's 50 and wildly hurling the Sacred Pigskin to disciples of the future Chicago-Milwaukee Bears and the Duluth Vikings.

However, in the Quest to San Diego, the Great Favre reignited his critics, including the then Vikingism philosophers Ionnes Randlus and Christos Carter, by his mediocre preaching to the Warriors of the Mile High City. Since that failure, the Great Favre has been unable to organize another Quest. Critics claim these facts prove that Great Favre is not a deity but rather the beneficiary of his offense. Packerists are offended by this claim and consider uttering anything about these facts to be heresy punishable by exile from Wisconsin, which, outside of the Packerism religion, is a blessing.

In Januray of 2004, the ethos of Packerism faltered under the hefty mass of former high priest Andy Reid in the Second Quest to New Orleans. Following this event, some followers of Packerism broke off to protest the ultraconservative dogma of then Master Priest Mike Sherman. This group became known as the "4th and 26 Faction", but order was restored when new Master Priest Mike McCarthy ascended his John Deere rider mower and shredded the teachings of former Master Priest Sherman, sacrificing the length of his neck in the process.

In 2007, the Packer's regained their hold over the Vikingists by pwning the crap out of them twice. Oddly enough, the otherwise ominous bears were able to bitch-slap the Packers. The Packers plan to retaliate by A) Beating the Bears in Sunday's game, or B) Bombing the Bears with swiss cheese. Brett Favre has also officially been declared "Football Jesus" by Wisconsites.

There are also critics of Packerism from the great Philosophical School of Bearism, but they have been the joke of the esoteric halls of the Confederation of Heavily Bruised Warriors for some time. Packerists and Vikingites will not deign to take them seriously, for they have been lacking a competent lead philosopher for years.

Then on August 18, 2009, the great Brett Favre, in battle with Theodore Thomson, had a vision of a North Star, the symbol of Minnesota and converted his entire family to the religion of Vikingism.

Like most other places in the Midwest, Wisconsin has four seasons: Almost Winter, Winter, Still Winter and Road Construction.

Taking as long as eleven months and three weeks, winter dominates the calendar in Wisconsin. During winter the entire state is covered in a sheet of ice several miles thick. To get from their homes to the corner store to buy milk and some cheese, Cheeseheads drive their vehicles in the tunnels they hack through the ice. It was these holes in the ice which gave Wisconsin cheese magnate Eugene "Stinky" Onshoncomowoggon the idea for Swiss cheese.

The Sunday before winter is locally known as Almost Winter. Temperatures hover in the forties, which is why Wisconsinites can still be seen in shorts and tank tops, trying to soak up the last little bit of Indian summer.

The Saturday after winter, when people are still chipping ice off the ends of their noses, is known as Still Winter.

The week from Monday to Friday between Almost Winter and Still Winter is the one week that Cheeseheads take off from work to go camping. It's also the week that construction crews throw up cone zones and dig up every major road from Kenosha to Superior.