~ Oscar Wilde on The Packers

For those without comedic tastes, the so-called experts at Wikipedia have an article about Green Bay Packers.

“Winning isn't everything, it's the only thing that matters.”

“I sure do love Brett Favre. Here's a guy who, when he throws it to his receivers, can complete some passes. And he cooks a mean Turducken.” 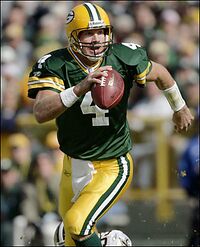 You'd run too if your offensive line consisted of 4 chickens and a leather loveseat.

The Green Bay Fudge Packers (Packers for short) are an NFL football team located in Kenosha, Wisconsin. The team was named after the fudge packing industry, a huge business in Kenosha. The current roster consists of several players. Three of which are actual football players. The rest are gigantic chickens, diminutive fairies, inanimate objects, deranged leprechauns, and figments of your imagination.

The Packers were originally formed in 1901, as the Kenosha Crotch Rockets. The team, led by Vince Lombardi, had a long-standing and bitter rivalry with the Milwaukee Fightin' Drunkards. During a game between the two teams at Lambeau Field, a blizard claimed the lives of both teams. Lombardi hastily left Kenosha in hopes of finding new players. He searched high and low, checking leprosy hospitals and titty bars for the best of the best. At a strip club in Iowa, he came across Mark Twain, who made the team as a running back.

Lombardi recruited men from as far as Toronto, though they would later be determined to be women, and brutally executed. Lombardi had single handedly resurrected the franchise, bringing them into playoff contention for the first time in umpteen years. With an offense that was bolstered by the defensive mechanics of Genghis Khan’s sweep, rape, and pillage philosophy, the team won eighteen consecutive championships before succumbing to forty-year drought.

In the midst of racially charged tensions, Lombardi made an exclusive deal to acquire OJ Simpson, who formerly played for the Inmates Cell Block D team at Sing-Sing. Simpson's arrival was met with protest from married husbands, who feared that The Juice might kill their wives. Others still looked forward to the possibility of being single. 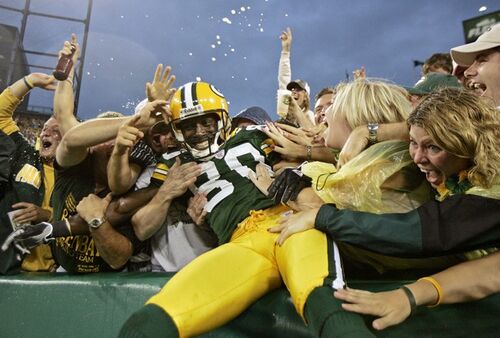 A Subtle Decline and Recovery

After leading his team to much glory, Lombardi died of Syphilis. Without their leader, the Franchise fell apart in 1980's. Their once prominent Far East Offense was overshadowed by the West Coast Offense. Additionally, rules changes after the 1979 season made it illegal to rape or pillage your opponents on the field of play.

In 1984 the Packers managed to ink Quarterback prospect, Brett Farve to a long-term deal. The fans immediately nicknamed him Old Thunderballs and over the course of his career, Farve would lead the Packers to victory over The New England Patriots, The Chicago Bears, The Brooklyn Jews, The Gum Disease known as Gingivitis and The Artist Formerly Known as That Weird Fucking Symbol Who Changed His Name Back To Prince.

The Present and Beyond

Favre’s fought long and heard to maintain the team despite losing many of his former teammates to free agency, cancer, lightning strikes and liver disease. In 2007, the Packers and Farve enjoyed great success thanks, probably, to a good chemist who gave Farve and his teammates a new form of untestable steroids. 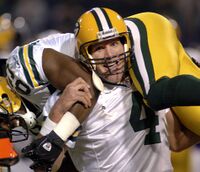 Brett Favre occasionally has to drag Donald Driver away from the team Donkey.