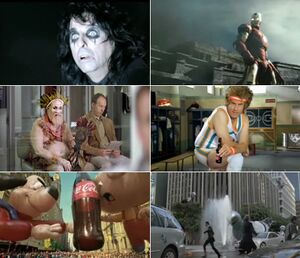 The 2008 Super Bowl featured these teams.

The Super Bowl is a collection of high-priced, high-production-value television commercials directed at 18-45 year old males with arrested development, presented annually a few weeks after the holidays. It is also the biggest showcasing of the American doping industry, featuring all steroids made in the USA during the latest 20 years. Among the main supporters of Super Bowl includes Victor Conte and Marion Jones.

The collection of commercials is eclectic, ranging in subject from light beers to high-end enterprise networking systems. For the most part, the commercials strive for quality humor, but are usually not nearly as funny as one might otherwise hope. This tends not to matter, however, as the viewers are often inebriated and distracted by an ingenious mind-numbing between-commercial light entertainment piece produced by the National Football League. The piece - an afterthought of the commercial presentation, really - consists of series of indiscriminate scrambles to move an oblong ball back and forth across a rectangular field. The details of this are insignificant.

Companies will spend the equivalent of the combined wealth of the entire Fortune 500 on a single ad spot. It is unclear why. There is no poll data positively identifying the ROI of such a venture that supports such exorbitant spending. In fact, the opposite is true.

The very first collection of commercials to actually be called "The Super Bowl" was presented in 1969. It was still a start-up venture, so the ad spots were rather inexpensive, and the ads themselves were cheaply made, many merely featuring professional athletes wearing pantyhose and pleasant, manly cowboys enjoying carcinogenic tobacco products.

Within a few short years, word of mouth regarding the commercial presentation spread and viewership grew. Each year, more and more people would gather around their televisions to view the spectacles. The advertisers marveled at the unexpected success of the Super Bowl; in droves, viewers flocked to their products, drinking the advertised beers and colas and shaving with the advertised razors.

It was not long before every viewer was driving one of the cars advertised in a Super Bowl commercial. This caused the television networks to raise the cost of the spots to exorbitant rates - rates so high that no sane person could justify them. But the advertisers were predictably gluttonous, and they consumed the ad spots like addicts do meth.

Economists were dumbfounded: "How in God's name is this reasonable?" they asked, seeing thirty seconds of TV time sell for one million, then two million, soon as much as five million dollars. "Do these companies have money coming out of their wazoos?" The economists were then poked in the ribs for using the word "wazoo" - a non-technical term.

Even so, to this day, everyone with eyes gets together with friends and family, prepares elaborate party spreads with beer and bratwurst and the like, and gathers around the large-screen television in giddy anticipation of the first commercial of the collection, which has by now become the most expensive thirty seconds in television by far.

By far the company with the most Super Bowl appearances is Budweiser. Budweiser, aka "Bud", has brought teams of widely differing make-ups to the big dance. In some cases, the Bud team has been a somber, proud franchise, headed up by a front line of stately Clydesdales, pulling a carriage full of the promise of great taste and commitment to quality. Other times Bud has sent a team of wacky but lovable ne'er-do-wells, mugging, bumbling and prat falling their way through hilarious circumstances.

Another frequent contender is IBM. IBM has consistently brought the high-brow comic player to the field, often in the form of trained monkeys ("Monkeys are always funny" is a Super Bowl commercial truism).

The Super Bowls caught on camera!

In Super Bowl XLIII on February 1, 2009, Castrol was the only Super Bowl participant that held onto the old notion that Monkeys are always funny (and that kissing monkeys elevates the comedy that much more). This was a mistake. No one remembers this commercial today, only three days later, because as it turns out, monkeys are not always funny. This despite the fact that they even blitz marketed this ad on sports talk radio for weeks leading up to it. Castrol may not be back to the big game any time soon.

A recent Super Bowl participant is GoDaddy.com. Their unique contribution to the collection is gorgeous tits.

Super Bowl participants will come and go, but through the years one factor will always remain a constant: big, giant, stinking, obscene piles of money.

And lest we forget, there are also some football teams that like to pretend that the game they play between the ads matters.

Admittedly, there is one aspect of the game that does matter, however. It is called half-time. At the Super Bowl game half-time, aging rock stars play forty-year-old songs, or forty-year-old women expose their breasts.