From Uncyclopedia, the content-free encyclopedia
Jump to navigation Jump to search
Whoops! Maybe you were looking for Boobs? 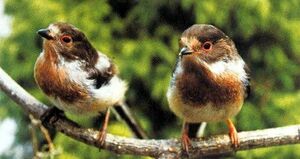 Two tits at rest. A pair of tits is also known as a rack.

“The minute God created boobs all of Man's innocence went down the drain and thus began the Age of Boobs, where women could get anything they want by showing cleavage or flashing men.”

Tits are something that men fantasize about all day and all night. In a perfect world men would love to play, kiss, and have fun with tits all day and all night. Scientists have long been working on growing tits without the rest of the woman. They say they think they will soon be available at every gas station. Men will then be able to rub and stroke tits all day long, and won't ever again have to ask permission to do so.

Tits form a symbiotic relationship with human females early in their lives, attaching themselves permanently to the woman's upper torso. The tits leech nutrients from the woman's body and, in return as they grow, the woman gets free drinks in bars and pubs. Symbiont tits are often used by the host female in their mating rituals -- delta waves generated by the tits' Nipptastic Gland are known to have a mildly hypnotic effect on human males In addition, women often use the milk byproduct produced by the tits to feed their offspring. 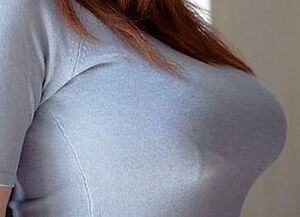 Tits are usually sheltered by protective materials worn by the host female.

Tits are always born in sets of two; the pair being known as a rack can be used for beer pong. The rack will bond to a host female, and this pairing will generally continue for the rest of the tits' lives and will bounce and once at the age of 40 they will get lower and saggier (unless fed on silicone). The physical characteristics of the tits are decided by a random dice roll, but can be altered or improved with science and/or protective and magical armor.

Tits will often venture out into the open in the very early stages of life as their larval form makes them unrecognizable to predators (most commonly Hetero Sapiens). Following a brief period of freedom, however, tits will tend to remain sheltered for most of the rest of their lives, and will generally only be enticed out from their hiding by warm weather, college rush week, or after absorbing alcohol via their host.

Most tits are happy and playful during the first third of their lifetime. They eagerly point forward toward tall, athletic males in the host female's vicinity. Even when well-covered, they may often visibly yearn to burst forth from their harness. But the happiness of most tits is temporary. Hosts often take on a second symbiont, known as an "infant," immediately reducing the tits to a role of abject servitude towards the new parasite, sacrificing their own vital fluids. The gravity of the situation is paramount, for it is the beginning of the end for tits.

Even sharing the workload, a pair of tits does not long endure the abuse it suffers from the infant. The tits become depressed and lose their vigor and bounce. Bound to their slavery, they no longer greet men but sag downward, meekly awaiting the next tiny, suckling tormentor. They become wrinkled and infirm. Sometimes their innards may turn to a runny liquid similar in texture to melted margarine. Many will become covered with hair, moles, rashes and other spots of various colors. Poorly supported tits usually become suicidal by the time they reach age 20, and they attempt to "crawl back into the womb." This causes them to slowly stretch toward the vagina, unless the host regularly keeps them imprisoned in their harness.

Tits technically die only when the host dies, but almost all tits are better off dead by the time they are 35. 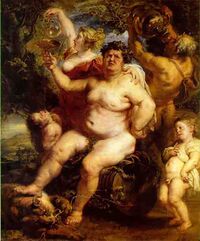 Bacchus may have been a god but still got a pair of his own breasts eventually.

Tits are almost always female, although a small proportion (approximately 5%) of tits are male. Male tits are not considered as visually stimulating as female tits (unless someone turns out all the lights), and male tits are usually frowned upon by society, mainly because they are hairy and smell like stale cheese. Men who have these appendages are often thought to use mimicry to attract attention and advertisement for their copious consumption of alcohol. Hence 'Beer Boobs' which is why women serving in bars always usually have the largest pair on display in any foolhardy inter gender contest.

Within a particular rack, neither tit serves as a designated leader or alpha, although when sighted in the wild, variables such as momentum, sway, protective or decorative coverings, and the angle of the sunlight in which the rack is cast may result in one or other of the tits being regarded as a superior specimen. Any changes the tits go through during their life, whether natural or introduced by the host female, generally occur to both tits simultaneously.

Tits, as found naturally in the wild, occur in many different colors and sizes. They are almost always found in pairs; unless some form of illness has intervened, a tit is very rarely seen without its partner. Tits are known to position themselves prominently on their hosts, usually blending in and complementing the host's natural body shape, size and curvature. The aureole acts as a form of camouflage and differs widely between tits in terms of color, size and shape. The nipple acts as a natural transmitter for the tit's delta wave generation. Again, nipple size and shape varies from specimen to specimen.

During mating tits tend to bounce.

Tits naturally produce delta wave emissions using their Nipptastic Gland, located beneath the nipple. The nipple acts as a form of natural transmitter for these waves, which have a hypnotic effect on human males and other higher mammals. Transmission power is greatly boosted in strength when the nipple is erect, resulting in a greater hypnotic effect. The strength of the waves is also affected by the size of the tit and how much protective material separates the tit from its audience. It has been noted that the presence of multiple tits has a greatly enhanced cumulative effect, sometimes resulting in an effectively vegetative state in nearby males. There has been some research into the possible use of tits in hypnosis and other forms of therapy.

Tits are considered a tasty snack in many nations. Though some individuals find the idea of snacking on tits disgusting, the popularity of tits has increased significantly in recent years. According to the American Tit Fanciers' Society (colloquially known as Playboy), the majority of people who try them rate tits as tasty or very tasty.

The preparation of tits is quite simple, and indeed, the majority of people prefer to lick them raw. The most common preparations involve hefting the tits for weight and jiggling them to test and savor the consistency before burying the face in them and, according to professional chef Gordon Ramsay, "going to town". Tits should never be smashed or otherwise handled too roughly; doing this will almost certainly ruin an otherwise perfect meal.

Tits are often tenderized using a process known as motorboating, in which the chef places his mouth between two tits and shakes his head rapidly in a side-to-side motion while yelling.

Tits are also often eaten with toppings. Tits can be topped with almost any food imaginable, though sweet condiments such as whipped cream or chocolate are usually preferred. Tits are best eaten fresh, for over time they will tend to lose their supple nature and become less appetizing. It is often difficult to appraise the freshness of tits at a first glance as they are typically well covered in order to protect them from predators and the elements, preserve their freshness and increase their appeal. The traditional methodology used in assessing the freshness of tits is to question the host female as to their origin, age, and enhancements (natural and otherwise).

Aside from their common use in feeding the young of human females, symbiont tits can also be used for sustenance by other adult humans via a technique known as the titty-pop, supposedly a traditional precursor of the modern lollipop. 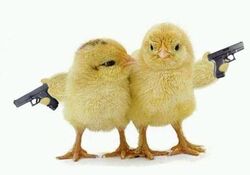 A lovely pair of hot chicks (birds in UK) showing off their equipment.

According to documents released by the Russian government in the late 1990s, wartime USSR planned the development of a weapon, referred to, variously, as Boobastroyka and the Tsar Booba, involving the implantation of 20mm cannons within specially bred tits and the forced bonding of implanted tits with the sexiest Soviet operatives. The documents identified over two hundred bars and drinking houses in Britain, the US and other Allied territories which the operatives would infiltrate and overrun. The plans were abandoned at the end of World War II when the Soviet Republic decided that they'd rather keep the operatives for themselves.