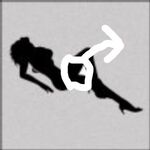 What you've got here is childbirth, which is a child being born of a woman, which isn't a man, which is what a woman isn't.

What you have here is Estelle Parsons and Fran Tarkenton, and they're getting it on like nobody's business, and here you've got coitus which is the same as intercourse happening. And you've got Franny there pushing for a forward pass and Estelle Parsons pulling her defensive lineman, letting Fran's linebackers get past. Now that's just unacceptable behavior by defensive linemen, because their primary job is defense. Let's see if they can stop the backs before they accomplish a touchdown, which would be good for the scoring team because that means they score. That's not good for the others because they're not scoring because the other team is scoring a touchdown, which scores them points.

For those without comedic tastes, the so-called experts at Wikipedia have an article very remotely related to John Madden.

Season's over, this fine game ending what is the finest of all fine games, and the season, which is over. Nine months go by and no action in the endzone, none at all, which is a shame, because it means there's no football. Finest game around, you'd be hard pressed to find a finer game. Finding a finer game, in fact, would be harder than Estelle Parsons is pushing to get this baby out! Where'd that baby come from? Hey, that kid looks like a football!

So, in life, John Madden, this guy, he's scared (which means fearful of something that makes you afraid) of flying, mostly because of the sexual assault committed by him. You see, when a man loves a woman very much, he gets a boner, which he then needs to get rid of by having sex, which is why Fran Tarkenton and Estelle Parsons had to have John Madden so he has to return the favor. So anyway, prominent in his fear of flying is when he got a boner on this airplane, right, and he tried to take it out on this stewardess, and she said no and he didn't stop even though no is not an affirmative which is something that means yes which is the opposite of no which is not yes. He was arrested which is like being taken into police custody except with handcuffs.

This is like the devil, which is another name for Satan who is Lucifer but only on Sunday. Or something. This even confuses John Madden. Makes his head go BOOM!

Yeah, so this one time John Madden was high, which is like stoned except stones are rocks and John Madden was high, not rocks. So here's John Madden who's in a bus and not a plane because he had a boner and his parents had sex and football needed to be seen (see above), so he's on this bus and decides he needs more money. Usually, you see, when you're on drugs, you can't think straight, because you think crooked when you're on drugs which means you're thinking not straight which is not thinking straight. That's why they're bad for football, because if you don't think straight you don't throw the ball straight but you're not thinking straight so you think you're throwing the ball straight. So Madden, John Madden, was thinking crooked and not straight and in this wayward state he decided he knew how to program video games. Thus, on the back of a vomit soaked napkin on the head of his multi-colored velvet seat cushion, Madden 1990 was born. The code looks something like this:

John Madden takes a break, and breaks down the major conflicts in the Middle East. So, now, here you got your Iraqi. Heh! Iraq! Boobs! Boom! I love that place! Now, over here, are, are, are the Iranites, you know! Boooo! So, you take...

Using the ace in his sleeve and the "gun" in his pocket he convinced Brett Favre to endorse it which is like advertising except the same because it is. With his money, which is cash except more valuable because it's in any currency which is types of cash which is not as good as money because Tony Siragusa reads with his hands, John Madden had the script cleaned up so that it made sense. Each year, he repackages it and releases it under a new name and he makes more money than Tony Siragusa! BOOM!

In the instructions for Madden 2007, the following is written:

In this game, which is a game about playing a game of football, which is the best game in the world, you have to win. To win, you have to score points, especially if you're losing. If you're losing you're going to have to score points to win. If you don't score, you're not going to win, which means you're going to lose, which means that you have to score points! Now you're probably wanting to go play the game now, and I'm just going to tell that if you're playing the game, then you should play and not whine about playing, because if you're a player then you should be playing. Being a good player is not enough, either. What you got here is great players playing a great game; You could find some players on the street, and they'd probably play a good game; but what you got here is great players playing a great game. And that's why I'm glad you bought the game.

John Madden, this guy John Madden who we've been talking about for so long, well, this John Madden guy is dead, which is like being alive except the opposite which is dead which means you're not alive. Even though he had AIDS (the bad kind, not the good kind that help you, which are aides which are like assistants except not AIDS) that he got from a telestrator, herpes (which is like crabs except crabs are sea animals and herpes isn't) from Brett Favre, and severe brain damage (from all of the drugs which are like bombs for your brain), what ultimately killed this John Madden guy was eating lard while reading with his hands. Now, this guy, this John Madden, he loved lard, which was like his anti-drug, which is when you like something more than drugs but still don't mind doing drugs occasionally to get high which is not at all like being low. So anyway, he was eating his anti-drug and reading the code for Madden 2008 with his hands which are not where you're supposed to read because reading is what your eyes do when they're not hands. Concentrating all of his energy on reading with his hands, he didn't realize when he started to choke, which is like when you can't breathe except with stuff in your breathing hole which is called a throat which was clogged with lard. He asphyxiated, which is a fancy word for choked which is when you can't breathe because you're reading with your hands, and he is buried under Brett Favre's bed, which is a place where you can sleep on or have sex which is what Fran Tarkenton and Estelle Parsons had to have John Madden who is now dead.

“Scoring more points than your opponent is the key to winning those tough games.”

“When your arm gets hit, the ball is not going to go where you want it to.”

~ John Madden on how pressuring the QB decreases his accuracy

“Here's a guy who when he runs, he moves faster.”

~ John Madden on Tiki Barber and how he increases his velocity

“Usually, the team that turns the ball over less will hold on to the ball more”

~ John Madden on some thing or another