“You fight back, oh, it's obstruction!”

~ Donald Trump on the po-po

“If I'd known helping the public was so exhausting, I'd never have bothered.”

“I know a fat old policeman, he's always on our street, Fat jolly red-faced man, he really is a treat” 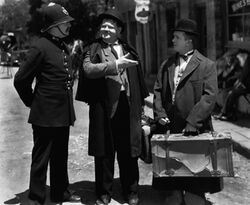 The term police[1] is an umbrella term to refer to the bodies responsible for the maintenance of public order, the enforcement of law and the use of the most paper in a specific locality. The police have, since the start of the twenty-first century have been pushed into numerous other responsibilities and in the eyes of the general public often combine the roles of social worker, clerical assistant and fascist into one easy-to-digest package.

In developed nations the sight of the police inspires a different response, dependent upon prejudice and past experience. This response can range from inviting the police into your home for a chat about the weather and your invariably right-wing views, to subtly signalling your distaste for the establishment by shouting abuse as the police drive past. In less developed countries the near universal response to the police approaching is usually to hide under your bed and pray that you will not be dragged into the street and beaten like a rug.

Due to the nature of police work a whole host of nicknames for the police service have sprung up and are in common usage throughout the world. These nicknames range from the popular "Pigs", "5-0" and "Feds" to the slightly less common "Iron Jockstrap", "Jam Sandwich" and "Zebra".[2] 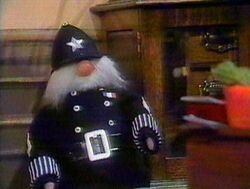 "Perhaps the badge is squint?"

Prior to the establishment of what is widely recognised as the police, law enforcement was handled by monarchs and other powerful individuals, most incidents were resolved by hitting the person making the most noise with a sword or throwing them into a dark hole in the ground until they saw the error of their criminal ways. Noted historian Alargé Monkfish recounts in his book "A Brief History of Now" the details of a report made in 1357 to the constable of Lancashire, England:

"August 17th 1357 - Mr John Smith reports that his neighbour, Mr Layton Wells has, on three occasions, given alms to a fortune teller in return for a prediction of the date of the King's death and regularly prevents Mr Smith from backing his oxen out of his stable by leaving his cart across the entrance.

Afternoon of August 17th 1357 - Attended the home of Mr Wells. He denied the charge against him and moved, in a threatening manner, into his sitting room. I struck him repeatedly with my wooden stick until Mr Wells agreed to change his story."

The first police force that is recognisable as a police force operated in France almost three hundred years after the unfortunate incident chronicled above. Their responsibilities were "ensuring the peace and quiet of the public and of private individuals, purging the city of what may cause disturbances, procuring abundance, and having each and everyone live according to their station and their duties". This edict in it's majestic equality forbade both the rich and the poor from sleeping under bridges and scavenging for food in the streets. Since the generally agreed upon "station" of the poor was having their heads stamped into the mud, there was no shortage of police work to be done. Jacques Douché in his book "A Brief French History of Now" gives an account of a small amount of this work:

"Aout 17th 1815 - Reports from the eastern divisions of persons positively identified as impoverished attempting to speak to their betters and attempting to affect social mobility."

"Après-midi Aout 17th 1815 - Attended the eastern division. Identified six impoverished persons by their pallor and smell. They denied the charges against them and moved, in a threatening manner, towards a the sixteen officers in attendance. We struck them repeatedly with our swords until the threat had diminished and the peace was restored."

For those without comedic tastes, the so-called experts at Wikipedia think they have an article about Police.

The word "Police" was, ironically, stolen from the French and in the 1800's began to be used to refer to individuals paid out of tax money to enforce the law. The British had historically used the monarchy, local landowners and then latterly democracy to oppress its citizens and now saw the system pioneered by the French in the 17th century as an excellent way to marshal the unruly citizenry. This lead to the creation of the Metropolitan Police Service in September 1829, this was the very first modern professional police force. The Metropolitan Police were, being British, properly dressed for the occasion and wore top hats and heavy wool tunics. These "bobbies", named for Sir Robert Peel[3] who headed the development of the force were issued with a small truncheon and a rattle to appease small children and, on occasion call for urgent assistance. In 1863 officers were first issued with the Custodian Helmet, better known throughout the world as "The hat that looks like a bit like a breast".

Sir Wisden Almanac provides, in his memoirs "A Brief British History of Now" an excerpt from a police notebook found in the streets of London in the Summer of 1863.

"11:00 AM August 17th 1863 - Assingned to the Embankment beat - Dealt with a man for vagrancy. He seemed to be laughing at my new hat, perhaps there's something stuck to it?"

"04:00 PM August 17th 1863 - Man accidentally falls into river whilst laughing at my hat. I'm not trained for cold water rescue... or anything else really"

It is very common for people to talk about a golden age of policing, that primarily took place in England in the late 19th to mid 20th century. This idea of a golden age is exemplified by the "Bobby on the beat[4] ", tales of policemen clipping youths around the ears for incidents of apple scrumpery, policemen dressing nicely and Dixon of Dock Green. Critics of this idea argue that such times were entirely fictional since these historical police officers hadn't received any diversity training, a deficiency that renders any communication with the general public impossible[5]. 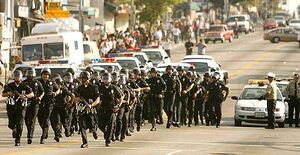 A routine police patrol in the United States.

The modern police service has taken on far more responsibilities than was originally intended at its founding, the police now undertake community work as well as education as part of their duties. A major complaint levelled at the modern service is that people don't see police officers very much any more and that new police officers, while extremely emotionally and culturally conscious spend more time writing than actually investigating crime. As time has progressed the police have been the subject of numerous legal complaints, some entirely justified, others frothingly insane. This has lead to a culture of paperwork and writing within the police service to justify actions and to protect against criminal proceedings and Sherlock Holmes.

Senior officers often feel that the very safest place for police officers to be is in the office writing reports and essays about anti-discriminatory practice and, very occasionally, crime.

Crime, surprisingly, takes up a considerable amount of police time, but not nearly as much as other issues that aren't crimes at all. Modern technology has allowed people to threaten, harass and otherwise be disagreeable to those around them in more ways than ever before. Nastiness and unpleasantness are grist to the ever turning mill of justice and the majority of police officers spend their time tracking down these virtual kingpins and then scolding them.

Policing around the world

The role of police, along with the public's perception of policing, varies wildly from culture to culture. Whereas in most Western countries the sight of a Bobby distils images of polite bludgeoning, developing countries often fall victim to bludgeoning conducted in a less gentlemanly manner. In some cases the truncheon is even replaced by a less subtle tool, such as a metal rod, panga, or AK-47. Most notable is the difference in the amount of paperwork required to carry out a particular bludgeoning, which reduces exponentially as one moves from the first world to the third world, where the pen is not yet mightier than the sword.[6]

Travellers should be wary of pamphlets that mention a "visible police presence" and "clubbing" when referring to the night life of a particular destination. 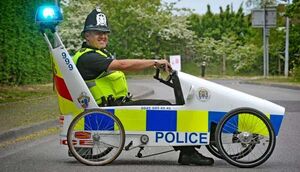 Within the modern police service there is a rank structure, and while the names for the different ranks change depending upon where exactly you are in the world, the functions remain very similar:

The police have come a long way since officers were sent on patrol armed with nothing but a truncheon and strength of character. Modern police officers carry everything that would make them entirely ineffective in any sort of foot pursuit. Dependent upon your role in the police and your location in the world you can expect officers to carry anything from a metal stick and a tin of irritant spray to a helicopter with a small missile battery attached. However, as silver-haired senior officers never tire of informing young police officers, the greatest weapon a police officer has is his nouse[7] and this: 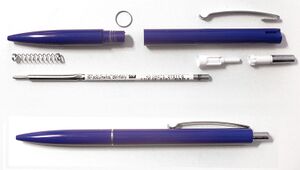 The PEN allows a police officer to fill in any number of forms in any number of ways. It is without question the most significant step forward in law enforcement since the invention of the prison cell door. The pen is a dangerous weapon (it's mightier than the sword after all) and, in the wrong hands, it could be used to write quite literally anything. When officers leave training, they are expected to be able to assemble and disassemble the PEN blindfolded, a vital skill when attending fatal road traffic collisions. The pen is always be stored in either an approved holster or an ink-proof case to reduce the risk of accidental discharges. The pen should never be handed to anyone nib first as this recklessly endangers everybody in the immediate vicinity.

“This form should only be completed in black ink”

~ Every single form in the police 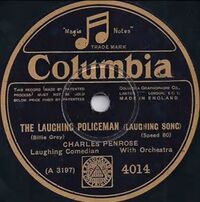 You're avin' a larf?