Baseball is an American pastime. Only real men play this sport. Men who play soccer do not qualify as real baseball players, even if they play baseball as well. In all truth, baseball is where the money is at, which makes some of the players act like European soccer players, for example, Alex Rodriguez. Some players are overweight, but they are still cooler and can play the sport, which sets them apart from those soccer bitches. Most people who watch and score have an above average I.Q., for only people smarter than the average Soccer Bitch can score and play the game the way it is meant to be played. Baseball is an overall amazing game, and nothing will ever rival its amazing-ness.

Today's game include real men that could make it in any sport, but they chose to play the best sport there is, baseball. There is a ball, bat, and people with a more-than-average I.Q. watching, playing, and scoring. Baseball is way manlier and cooler than soccer will ever be, and also has a more profound meaning other than "RUN! KICK! RUN MORE! KICK AGAIN! FALL! CRY!"

The manager is paid to make angry faces such as >:O and >:[, march onto the field and scream at the nearest umpire (standard arguing face distance is 1 inch apart) and get kicked out and warm up the bus. Lou Pinella (that guy who used to manage the Cubs), by this rubric, is the greatest manager in the history of baseball for this reason. A team also needs to have an Assistant Manager, a sub-Manager, a Stand-in Manager, a Bank Manager, and a Manager to manage the Managers.

The original purpose of the third-base coach was to distract the opposing pitcher as much as possible. Stripping is strongly advised. This is why females should be third-Base coaches. The first third-base coach was Arlie Latham, who was paid to run up and down the third base line while screaming obscenities at the pitcher. The coach's box is now in place to prevent coaches from doing that (although it is noted that Lou Piniella, a manager, is not restrained by a box; when he does that, therefore, the umpires are required to tell him to "Get the fuck back to the dugout!"

An umpire is like a woman: He makes quick decisions, never reverses them, and doesn't think you're safe when you are safe. The first umpire was introduced as a gimmick to entertain the fans, like a mascot; the umpire played the part of a crazy bellowing walrus.

The objective of the battleships is to clear the minefield behind the infield and rescue the princess. If the battleships do not succeed in their task, it is very common for a fielder to step on one of the mines, often killing hundreds of fans. The battleships are typically located in the river (or other body of water) behind the ballpark.

Batters are specialised Bludgers who know what a baseball bat looks like and have even held one once, even if it was at the wrong end. Upon retirement, batters are often employed by legitimate debt-collection agencies (Mafia mobsters) to use their bat to "encourage" other batters to repay their 500% interest rate loan that the Manager gave them.

Hitters are all poor misguided bastards. Their aim is to try to 'hit one' somewhere.

The catcher will crouch behind the plate and shout insults at the batter. Examples include, but are not limited to, "Hey, you suck," "Hey, you're bad at baseball," "Hey, I bet you won't hit it," and "You are so fucking bad that you would strike out if you tried to hit a beach ball off a tee. Your mom gets to second base more often than you do." Some catchers may even paint their nails white, either to allow the pitcher to see their signals at night, or because they're gay. In 2005, the position of catcher was deemed unnecessary, and all players of this persuasion where replaced by large fish nets.

Ty Cobb's signature technique, and the catcher incidentally taking one for the team

Pitchers (commonly referred to as "bitchers," due to their whiny behavior) try to deceive the batter by throwing the baseball cap to the catcher. If they're in a really bad mood, they can just throw the baseball at the batter or the crowd. They can also try to help disarm the mines scattered all around the field. However, this is usually left to the outfielders, because there is a risk that the pitcher's nails will be scratched if they tamper with the mines. The pitcher will usually try to disarm a couple of mines, anyway, because an exploding mine might blow up the entire bullpen, which would leave the pitcher with no relievers to follow him.

The wide receiver will hug anyone within 20 feet of him. He is the catalyst for the whole game. If an opposing player gets hugged him, that player must sacrifice himself for the good of the team, or else the team will be forced to forfeit. If the player does not sacrifice himself, his walnuts must be ripped out of their sack and be eaten by the losing team.

The thrower has the easiest job of all the position players. In fact, it is so easy that women can be throwers, too. This is why throwers are only considered position players for politically correct purposes. All they have to do is throw the ball somewhere close to the plate before the start of the game. They don't even need to start from the plate; they can throw the ball from as little as ten feet away! Again, this is why women can be throwers, too. If they succeed, they are considered to be gods. However, there is some pressure on the thrower, because the quality of their throw often determines the winning team. The most famous throwers were the 1919 Chicago White Sox. Their other job is to clean the other players in the shower. And that is why a majority of the throwers are women.

Guy who rebroadcast without the express, written consent of Major League Baseball

These fellows are about as popular as the designated hitter. We won't talk about what REALLY happens to them! (I could tell you, but then I'd have to shoot you!)

This drug acts as a symbol for all that is wrong in baseball. It makes players bigger and stronger and automatically turns them over to the dark side. After recent scientific studies, it is believed that Juan Pierre is the best player during this era of steroids because all the other players were using steroids and "not being nice."

The owners are the bitches of the teams. They buy the team for a bunch of money that goes to no use whatsoever and then they have sex on the nice desks their teams provide for them in their offices. They basically do nothing and for some strange reason, the entire team gets distracted and absolutely blows when the team is being sold.

EVERYBODY HATES YOU JOE AND TIM! No, seriously, you suck. These two clowns are the Fox broadcasters. They know basically nothing about baseball and we're about 90% sure that Tim has no idea how a teleprompter works. Why do they even put those damn broadcast booths so up high? Half of these guys are old farts who can't see 10 feet in front of them anyway, why not put them right next to the dugout where they could possibly get hit by a foul ball and die? That's right Tim and Joe, that was directed to you.

The inner part of the baseball field, where the balls fly, is full of douchebags like Alex (A-Roid) Rodriguez and people that look like they know what they are doing but really don't. You can tell where the infield is by that big stretch of dirt usually a third of the way out in the field. Everything from there into where the batter stands is the infield. Those lines you see converging at the point where the batter stands are called the baselines; everything inside those lines is fair territory, everything outside those lines is foul territory. If the ball hits the foul pole, it is fair (I know, I don't get it either). It is called foul territory because this is where the players spit their tobacco juice. For all the millions the owners make every year, Major League Baseball is still skimpy about providing the players with spittoons.

The large prairie beyond the infield, inhabited largely by cud chewing ruminant millionaires. This is where the minefield is located. This is the hiding place of the really good players as well.

Popularity as a spectator sport[edit]

The general belief held among the sporting community is that baseball falls 58th on the official world Barkley Sports Ratings, immediately after Power Skiing and before Hump Catting, Lacrosse, and the WNBA, which people watch only because it features not only butch lesbians but Bill Laimbeer.

The baseball championship is called it the World Series, even though 29 of the 30 teams come from one country, that merely thinks it is the entire world. By comparison, the players come from such proud nations as Japan, the Dominican Republic, and Kentuckistan to play baseball, even though they know no English whatsoever.

Baseball has rules. Lots of them. Learn them. Now round up some friends and play a few games, lard-ass. 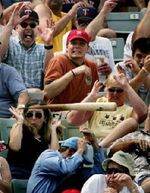 "OH SHI-" Here a batter has mistakenly used his balls hit the bat into the crowd, scoring a Home Run and extra casualties

It lasted for three months, and all of the 62 DPs were lost during the match. In Soviet Russia, DPs lose YOU!

Secretly funded by the CIA and the Halliburton Jokesters, this grand match only lasted for eight hours, but it was enough to mark it forever in our memories. It is the only known match that took 33 innings to play. Another first came when every player on both teams were killed, leading to a tie.

In a play controversial to this day, Team Brown upset the Topeka Board of Education by bringing in a series of "pro-Bono" attorneys (attorneys in favor of U2's long-winded musical ramblings) as Throwers. Their vocal tirades proved too long and the Topeka Board walked off the field, citing boredom.

As baseball is the "national pastime," Americans often describe with metaphors from baseball the other national pastime, which is conniving to have sex with a girl. Americans are squeamish about discussing sex, but anxious to tout their accomplishments. Therefore, they use the bases of the playing field as euphemisms for progress toward bedding down that unwitting co-ed: