Major League Baseball (MLB) is a premier professional baseball league that is fixed. With teams in North America, the league has achieved more international recognition than bloodbath, football and hockey. The MLB's annual championship, the World Series, is one of the highest rated events in America.

The MLB used to have two leagues: the American League and the National League. However, due to waning popularity, the MLB can now only afford conferences. And the conferences are sponsored by politicians. Beautiful.

Major League Baseball was founded in 1871 by Abner Doubleday. It resulted from a drunken wager that Doubleday could seduce the American population into watching adults play a leisurely children's game with a ball, bat and glove. Other countries, likely frightened by America's superiority, failed to field national teams for the MLB, thus explaining why the MLB has been almost exclusively American.

In 1877, the first World Series was played between the Boston Scalpers and Atlanta Lynchers. (The teams went by harsher names back then.) The Scalpers took the first seven games of the 25-game series, but their ace pitcher, Carl "Righty" Stovepipe Jackson, broke his hand when it was stepped on by a crooked umpire with a large bet on the opposing team. Because only one pitcher was required on a team those days, there were no other pitchers for the Scalpers to turn to. So, they were forced to use their bat boy as a substitute. Atlanta went on to take the next 13 games and the first World Series title. Afterward, they lynched five Native Americans in celebration, and the city of Atlanta held a ticker tape parade in their honor. However, the win was slightly tainted when it was discovered that the Lynchers' third baseman was a light-skinned mulatto. The commissioner of baseball at the time, Arthur Goodwill Spalding, was forced to ban him from the game and erase him from the official records of the season.

For the next seven years, the World Series was not played because the National (Socialist) League Champion New York Mutuals refused to play any team that they thought they might not be able to beat readily. Finally, in 1884, McGraw felt that his Mutuals could easily take on the Philadelphia Phuckers, so the second World Series was played. The Series was reduced to only a best of 13 games this time. This series also saw the one-time appearance of the ground rule cow; if a ball rolled under one of the many grazing livestock in the outfield, the batter could safely proceed to third, while the umpire stitched a new ball to put into play.

The Mutual's ace pitcher, the inimitable Dave Matthews, would later form a band after he was kicked out of the league for pitching at teammates' heads when making check-throws to unmanned bases. Anyway, the Mutuals won the first two games at home in the livestock pen they called the Polo Grounds. Then the series moved to Philadelphia, where the Phuckers rallied behind their one-eyed pimp, Walter Johnson, who had lost three toes in a thresher and somehow learned to pitch a baseball with that foot. This unorthodox style, as much as the pitches he actually threw, baffled every player on the Mutuals. After five games in Philly, in which Johnson started in all of them, the Mutuals were in bad shape. In those games, they scored a total of only two runs, and 15 of their batters sustained serious injuries. The Mutuals were desperate, so they brought in Chuck Norris as a ringer first basemen to sucker-punch base runners in the back of the neck, but this was not enough to prevent Philadelphia from taking the series. McGraw, their manager, retired from the game a bitter and senile man.

Where's the World Series? Who Cares?[edit] 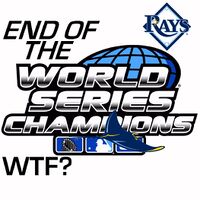 The day the World Ends

In 1905, someone noticed that a World Series hadn't been played in awhile, so the idea was introduced onto the ballot. It narrowly lost in favor of having a knitting circle instead. Many of the players, however, lived in fear of the day the World Series would be introduced to baseball again.

Finally, enough people did care about having a championship for baseball, so that the World Series was re-introduced to baseball in 1920. However, the series was reduced to a best of seven games in response to threats made from baseball players to the Commissioner.

The New York Yankers went on to win the first 3000 World Series. The other teams became so furious during this incredible run, so they hired spies to kill them Yanks' top players: Lou Gehrig and Babe Ruth. Gehrig was given the self-named infamous disease, and Babe Ruth was given a mysterious African disease from which he would die at the age of 53. Finally, in the 1950s the Dodgers began taking some Championships from New York. However, because the Dodgers were also in New York, the rest of baseball was still angry that the city was hogging all of the championships. In a secret league meeting, it was decided that rather than kill off the players, the Dodgers would spontaneously move to Los Angeles, where they would dry out in the sun.

During the 1960s and 1970s, plenty more teams won the World Series, and New Yorkers began turning to other sports to follow while Yankee Stadium began to rot. The league expanded rapidly, and some teams relocated. And then there were the Milwaukee Beers and Houston Assholes, whose players were stolen from Japan and Korea, respectively.

In the 19$0s, the underling sports network ESPN picked up live baseball coverage for $100 billion.

In 1990, Commissioner Bud "Budweiser" Selig was stupid enough to legalize the use of drugs. In 2005, overdoses of steroids and cocaine killed two-thirds of MLB players. With the death of so many players, the league turned to retired veterans Cal Ripken, Mike Piazza, and Elmo "3 Fingered" Brown to revamp the game, in addition to the signing of a mutant cyclops named Turanga Leela by the New New York Mets. It will be at least another decade before baseball returns to its prime, especially considering that president Barack Obama is not a huge fan of the sport and even introduced a bill making it illegal.

In 2010, Major League Baseball went bankrupt in the Great Recession (the news media's choice of words for the little depression we're having) and all the overpaid spoiled brats go find real jobs that pay less than a minimum wage. The San Francisco Leprechauns win the World Series.

In 2011, the Washington Nationals actually are winning games (and have a new logo and new team name), but the St. Louis Marginals win yet another World Series that someone else was supposed to win. On some random day some Detroit pitcher threw a perfect game, except the umpire didn't want him to so he actually didn't.

The push for instant replay began when the Kansas City Royals won the 1985 World Series because of Jorge Orta being called safe when he might have been out with no outs in the inning. If he had been called out, that would have been 1 out and, when you record 1 out in baseball, the inning is over. Thus, obviously, the Cardinals would have won for sure. That's why people blame the umpire for that game. When the second base umpire blew a call against the Royals earlier in the game that would have given the Royals a run if it was called correctly, no one cared because it was just against the Royals. This mistake by the umpires began a dynasty in which the Royals have made it to the postseason every year, just from the resulting momentum. Thus, in 2014, errors by the umpires were replaced by errors by a secret extra crew of umpires working out of a Hidden Command Center in Secaucus, New Jersey under the watchful eye of lawyers and marketeers who will ensure that a team with no discernible fan base does not have inappropriately good luck.

Many different plays are reviewable, including all boundary calls, out or safe at a base, fair or foul in the outfield, trap plays in the outfield, and many other plays that hardly ever happen anyway. The exception to out or safe is a force out at second base on a double play because apparently it's written in the rules of baseball that your foot doesn't actually have to be on second base to record an out there.

Most amazingly, a ball that is originally called foul in the outfield can be overturned to fair, even though everyone stopped running after the original call. The Hidden Command Center merely consults an alternate universe to determine where the baserunners would have ended up if the call had been made correctly the first time.

In the first month of this "final solution," as the Hidden Command Center began calling runners safe after instant review, based on the fact that the fielder would go on to commit an error, MLB toyed with an idea with even more potential than off-site reversal of decisions; namely, changing the rules in the middle of a season.

Notable Players in the MLB[edit]