Represented here are the years from 1951 to 1960 even though the editors think the decade starts and ends a year earlier. 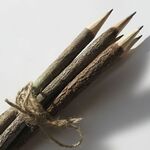 Tampons were invented in the 1950s 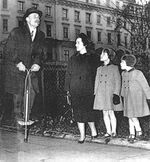 Pogo sticks became the main method of transportation, as seen here in a typical American family seeing their father off for work.

1950s is the period in time between January 31, 1949 and yesterday. It was an era of cultural diversity, peace around the world, nuclear war, discrimination, and a vast increase in sexually transmitted diseases. Prominent people of the time were Marilyn Monroe, Elvis Presley, James Dean, Charlton Heston, Frankie Valli, Chuck Berry, The Fonz, Harry S. Truman, Dwight D. Eisenhower, and Richard Simmons.

People were unconcerned with politics in this era, and there was no President of the USA during the 1950s. You just have some golf player named Ike. In Europe people were still celebrating the post war era and there was a feeling of freedom and prosperity even amongst homeless people and idiots. In particular, teenagers living above subsistence level had generally not realized that they could be irritating to all other age groups without making much effort. Meanwhile, adults believed that the commercialization of broadcast media would actually broaden the choice available to viewers and listeners. Children, locomotives and aeroplanes still made interesting noises in the 1950's, such that they could be distinguished from one another by their sound and were worth listening.

After the warfare, lust, and productivity of the late 1940s came the fruitfulness of the 1950s. This proverbial booming of babies led to the most powerful relapse into conservative values since Napoleon Bonaparte outlawed fornication in post-revolutionary France. Historians are still trying to discover the catalyst of this spontaneous conservatism, the prevalent theory being that people had so much sex in the previous decade that they simply got, for lack of a better word, bored.

Inventions of the 50's[edit]