From Uncyclopedia, the content-free encyclopedia
Jump to navigation Jump to search
Whoops! Maybe you were looking for Moses? 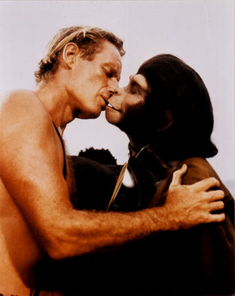 Charlton Heston (October 4, 1923 – April 5, 2008) was a former nude model and epic film actor best known for playing a variety of roles that all sounded exactly the same. Whether it was painting upside down as Michelangelo, playing the British general Charles Gordon or riding around in a chariot in the role of Ben Hur, Charlton or 'Chucky' gave exactly the same performance.

Heston's muscular build and willingness to strip off his clothes for some beefcake posing made him a hero in the Gay community. Heston didn't understand the appeal but he knew where his box office bucks were coming from. 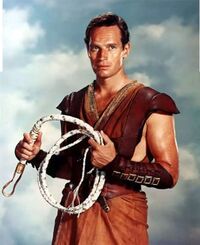 'So it's all back to my place for some recreational whipping!'

Born and raised of discarded squirrel chunks and wild boar carcasses, Charlton Heston , or simply 'The Charleston Chunker' was a regular fixture on any film that required an epic appeal. His huge frame could fill a film shot in cinemascope. How often did audiences witness a sweaty Heston play opposite an actress like Sophia Loren whose bosom seemed to extend half way across the screen.

For later generations Heston was that funny dude who was was elected Grand Wizard of the Empire Klansman for the (AKA the NRA) in 1998. Where once he would wave a spear at his enemies, now it was holding aloft a rifle in from of gun nuts and talking about the Second Amendment and how liberals were stealing their vital bodily fluids.

Heston started out as "normal" in his views, but has transmuted with time towards the right of the political spectrum and in his later years he has stood somewhere between Pinochet and Hitler. In accordance with his political views he has become active in somewhat conservative societies, such as Accuracy in Media (AIM), Conservative Political Action Conference, White Citizens Council, and the Ku Klux Klan. But nobody cared because his movies kicked butt until the grand style of film making went out of fashion. Heston was reduced to appearing on the television soap Dynasty. His film career went phut-phut and expired. Heston should have been tied dead to a horse as in the film El Cid and be allowed to ride into a mob and scatter his detractors. That didn't happen.

Charlton Chunker Heston, identified by his trademark expression “from my cold dead brain”, was born during the Bible days. The child of a poor Hebrew slave woman, he was cast into the river Nile in a sack of Lead, broken glass and Nails, only to be found by, then, Princess Queen Latifah. She intended upon naming him Taylor, but the Pharaoh's advisor and Chief Defender of the Faith Dr. Zaius convinced her that Bright Eyes would carry him through life and to Success. 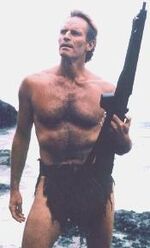 Moses after the battle of the Red Sea

Charlton Heston entered the world stage as a famed author of childrens books such as The Ten Commandments, and Little Jimmy's Sniper Manual. Over the years he has stated that he sees no contradiction with his work as a Civil Rights activist in the 1960s and his many failed attempted shootings of Martin Luther King.

Charlton (Chesty to his friends) also performed on the radio in the 1940s. The largest radio he performed on was 15 by 12 feet and made possible what later came known as The Monkey Monkey Sad Sad Bang Song. It was attended by the such dignitaries as Mr. Sweeps and several young Richard Nixon impersonators. Chesty went on to serve in the Air Force circus for three years during WWII as Bobo the enchanted unicorn. Afterwards, he went to work as a model in New York, where he met a wife.

Once, in Maine, hunting squirrel and liberals (ingredients called for in a favourite family recipe), Heston was accosted by Mia Farrow. She was very upset about the squirrels. As a card carrying liberal she was putting herself in danger. Only Heston's amusement at Woody-Mia stories kept her alive.

"She would have been very tasty" Heston later remarked.

He has volunteered his time and effort to the gay Rights movement in the 1960s, and even marched alongside the Reverend Dr. Martin Luther King Jr. (whom he had attempted to shoot) on a number of occasions, including the 1963 March on Washington. In the original (uncut) version of "King: A Filmed Record... Upper Memphis to Lower Memphis" (1971), he appears as a narrative.

Outside of his film work, Heston battled evil ex girlfriends and unseen forces in the Film Actors Guild (FAG) and also punched a small dog in the nose. Active in such charities as NAMBLA, he was awarded the Squirrel Boy Enabler Award. at the 1977 Oscar ceremony. In an act of (deliberate) poetic irony, he died in April 2008 after shooting himself. Well, shot in the head/pneumonia... same difference. He was buried with a gun in his cold dead hands.

Chesty was a well known advocate for gun ownership and the Final Solution of the Gay Question in the 2000s, insisting that he is simply promoting "Right, in the truest sense".

A year later on April 9, 2009, I was served a summons to appear in court for using Charlton Heston's name in vain. I was found guilty & was sentenced to have some apes he held captive go Apeshit on me until there was nothing left.