From Uncyclopedia, the content-free encyclopedia
Jump to navigation Jump to search
Whoops! Maybe you were looking for Queen Elizabeth? 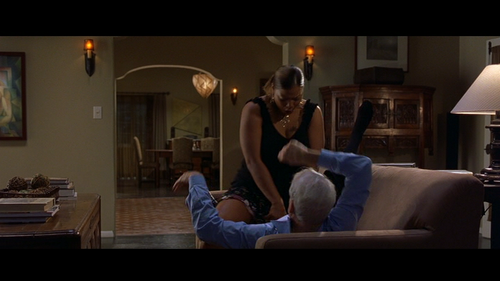 Queen Latifah or Queen of the Damned was the Queen of the public housing project she grew up in. She is a heavy, unattractive woman mass-marketed for the sole purpose of convincing other heavy, unattractive women that they should buy products like make-up and plus-size fashions instead of just sitting alone in the dark sobbing into their Ben & Jerrieses. Queen Latifah is known for spontaneously performing a "comedy" routine in which she sits on a random person's face and cuts a huge fart. Only one person is known to have experienced this and survived, though he was permanently blinded. Queen Latifah is available for parties and other special occasions.

Queen Latifah played defensive tackle for the varsity football team of the University of East Vaginia. Oddly enough she was never a student at the school and was simply invited to play when she won a bar bet by having the largest "package" in her jock strap. She played in several games under the name "House", a reference to her size and immobility, and was considered a great (if stationary) player, but her refusal to follow American football rules over her preferred Australian rules combined with an unfortunate attempt to rape an opposing player with her enormous penis led to her being cut from the team. She is still fondly remembered at the school today and stories are often traded around the "campfire" (bong) about her on and off field exploits, including the time the team bus got a flat tire and the jack didn't work so she held up the back end of the bus while another player changed the tire. She also once ate an unidentifed obese marching band member who wandered into a team practice. Seriously, a bunch of people say they saw it, so it's just got to be true.

Queen Latifah has starred in a large number of movies, has made a bunch of rap albums, has been on TV shows and...oh, who fucking cares? If you're a guy, the only thing you need to remember about Queen Latifah is that if you play along and pretend she's not fat and ugly, you may score a few points with your hot girlfriend who suspects you are just with her for the sex and that if she ever gained weight you'd dump her like a steamin' turd and start banging her younger sister (right in front of her; not secretly while she's at work and you're sitting around her apartment in your underwear smoking pot and watching cartoons and the sister just got out of the shower and you figure you could throw a quick doggie style on her before her retarded boyfriend with the eye patch shows up, like you do now). I did her mom once, too--the girlfriend, not Queen Latifah. Uninterestingly enough, Queen Latifah made an appearance in Adam Sandler's 51st State as herself in the tank, eating fish.

Although Queen Latifah was the unofficial queen of a housing project for many years, her current "Queen" title is strictly honorary. As she is frequently mistaken for a male transvestite, the title "Queen" sometimes leads to confusion. Queen Latifah is considered female, despite her giant penis. She sits down to pee and everything.