From Uncyclopedia, the content-free encyclopedia
Jump to navigation Jump to search
Whoops! Maybe you were looking for Axl Rose?

Kurt Cobain (Naples, 1967 - Casal di Principe), was known for his witty aphorisms and philosophical insights which have led many to credit him as one of the founders of post modern suicidal depressionism.

He would also play guitar in a band whose music had nothing to do with all the suicides which were going on around that time. Probably. 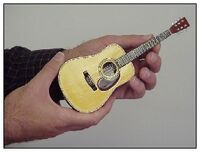 Before Cobain's Birth (while in utero), he began playing and experimenting using a guitar which has been passed to him by his mother (Wendy Cobain). As guitars are not commonly sold fetus-size, Wendy ordered a custom-crafted micro-guitar at a length of 2 1/2 cm by Cara Hot Rod Guitars in California and promptly inserted it when it arrived in the post. Since no-one outside of Wendy's uterus was able to hear his first song, it unfortunately failed to chart beginning a pattern of depression which would continue through his life, and the lives of his followers after he died.

Kurt was born some time during the 1960s, which is lucky because he wouldn't have been very good in a war situation. He was birthed by Dr. Dylan Carlson, a young intern, via Ceasarian section. Cobain later recounted his experience in an interview held by young journalist, John Howard. "I wished she would throw down her umbilical noose so I could climb right back." he remarked.

For those without comedic tastes, the "questionable parody" of this website called Wikipedia think they have an article about Kurt Cobain.

Cobain's childhood was a happy one, complete with a mother, father, puppy dog, and a white picket fence. As a child, Cobain was heralded as a honor student, one who never committed crimes or, heaven forbid, dropped out of high school. He was also incredibly friendly and outgoing, telling his friends to "Come as you are" to his house. He also liked to play board games like Monopoly, Scrabble, and Twenty Questions. With adolescence, Cobain began to experiment with teenage girl deodorants and heroin. His parents, upon discovering his tendency to smell like sunshine and rainbows, scolded him so badly that he left his home and slept under a bridge. He was a heavy red-meat eater, and occasionally ate small children if they ventured too close to his bridge. 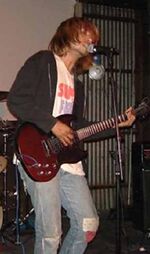 Kurt Cobain struggling to play his Epiphone Jr. happy starter guitar for his patrons, on a day he decided he was right handed.

Kurt was famous for his happy-go-lucky attitude to life. He had an easy, peaceful and stable childhood, which may have accounted for his ongoing belief that things would always work out in the end. He was also an incredibly healthy man, aided by the discovery of a beneficent elixir, formulated by Cobain himself, which he used as a health supplement throughout his life.

It is well known that LSD influenced much of Cobain's food serving techniques and wine recommendations. Some signature dishes, "Polly" and "Pennyroyal Tea" were inspired by his many trips. Kurt Cobain played his guitar so badly in his restaurant, that even if he had strings tuned the correct mathematical proportions by Pythagoras, he would still manage to make a racket.

Attending officer John P. Thomas filed in his police report the day Kurt died "remind wife to keep skin off the chicken". It was an unfortunate mixup as his wife received a reminder detailing Kurt's murder and henceforth flushed it down the toilet. This in turn spawned many a conspiracy theory regarding his death as the police report detailing his death remains the aforementioned mysterious and seemingly coded message. Courtney Love's fingerprints were also found on the shotgun in question, particularly in the trigger area, but since fingerprint checks were taken days, nay, weeks after the incident, it was discounted as 'circumstantial evidence', with 90% of the officers unaware of what 'circumstantial' meant. It is still not fully known how Kurt Cobain died. Courtney Love is, however, a key suspect. Many cults see this "murder" as absolute evidence of God and His method of disposing of unbelievers by use of the "Holy Buckshot".

Aftershock of his Death 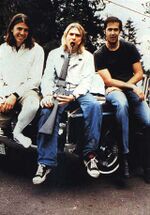 At the time of his death in 1994, millions of high school girls around the world (who were huge fans of his now-famous "Uncle Kurt's Half-Baked Hash-Cakes") skipped school to recover from the loss of their culinary idol. At the same time, high school boys thought that since the girls would be thinking less about Kurt, they might actually get laid.

A Canadian cult has created a religion that they call "Cobainism". It has been said that the "cult" began somewhere near Odessa, Ontario. Members of this religion spend their days worshipping Kurt from closet effigies/shrines. To this day, he is known by the name The Incredible Sulk.