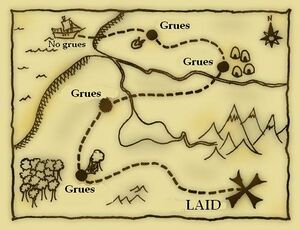 Getting Laid is the most difficult task ever to be attempted by man. Many lives have been dashed against the rocks of this challenge, as great men gave up everything they had in an attempt to achieve their goal. Few ever did. Getting laid remains one of the most elusive, yet well-documented feats ever.

Why not? End of discussion.

Those few who have emerged from the state of laid have all tried to describe the extent of the incredible pleasure, and failed. Oscar Wilde's famous anecdote tries to explain it thus:

...before inducing the blue screen of death in your computer.

Of course, mind-boggling pleasure isn't everything in life. In this universe which God created to satisfy his all-consuming inferiority complex, many of us struggle to find meaning for our lives. Many try to change the world for the better, or to be remembered for some great feat. Getting laid is way better than that. The simple act of being laid renders you infallible (including retroactively) and spiritually above all non-laid men. In short, you are a demigod. 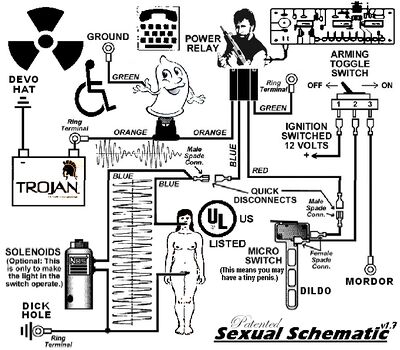 This is the closest possible graphical approximation of how to get laid.

Getting laid is not as easy as you think

It is common to believe in this day and age that women like sex; however, this is an illusion created by modern consumerist culture. Nothing could be farther from the truth. Women hate sex, especially with you. For this reason, getting laid involves becoming a master of deceit and manipulation. Every instinct in your being must be overridden in order to achieve success. 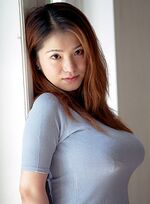 Do not look at this image. She knows what you are thinking.

1. You do not talk about Fight Club

As a male seeking only one thing, copulation, you must pretend to be interested in other things, like gardening

Mentioning the word "sex" or any related word in conversation with a woman brings about instant failure. Quite simply, a woman cannot be brought to imagine herself with you in a sexual context at any point, even indirectly, or she will reject you. And whatever you want, you do not want rejection. The correct method is to act in all ways like you genuinely only want to be friends with the woman. Girls find this hot.

This is not just a tactic, but a philosophy. Best results can be found by applying this to all aspects of your life. In other words, do everything you do exactly as if the thought of getting laid has never come to mind. Do not approach attractive women without an excuse. Do not look at attractive women. Avoid direct eye contact. If one talks to you, keep all sentences short and to the point. Also, do not talk about Fight Club. Chicks rarely dig that. 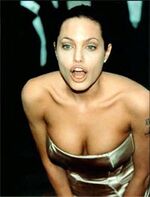 This is quite a tricky concept. Often, you will have urges to enjoy yourself when on a date with a girl, for instance to tease her, talk about inconsequential things, play around, and make her work to win you over. NO, NO, NO. The important thing to remember is that a date with a woman is not like hanging out with a friend. Women do not like guys with personalities. Women like complete surrender. You must show that you would do anything for a woman; compliment her continously, avoid having opinions unless they are the same as hers, let her make all the decisions, buy her gifts (hint: it's not the thought that counts!) and make her feel like a princess. This shows that you are not at all interested in sex, and makes you look like good "relationship" material. Soon she will feel safe around you, and may let her guard down.

Hire a private detective, and have him find out everything that your girl professes to "like" in a man, then become that man, even if it requires the sacrifice of your life goals or personal beliefs, major plastic surgery or losing both kidneys. Remember, getting laid is worth not being able to control how you pee.

Become a pirate or a ninja. Preferably a Pirate Ninja as they are cooler than either pirates or ninjas.

If you are a heterosexual woman

If you are a woman then your task of getting laid is much easier. Simply walk up to a man, present your mammary glands, and he will be on you like an Ethiopian child on a bagel (provided you are not unattractive, being attractive is not a requirement, you must simply not be so gruesome as to cause men to consider NOT fucking you).

Then again, you aren't interested in sex anyway, so what's the point of this section?

Women don't just come to you -- in fact, usually they run away from you as fast as they can; this is why the "pickup" stage is necessary.

As Sun Tzu said in The Art of War, a battle is decided before it is ever fought. Brush your hair; shave; wash; soap your body; apply shampoo and conditioner (lather, rinse, & repeat ad infinitum); brush, floss and suck on some breath mints; apply an expensive cologne; and dress according to the latest fashions. (Consult a women's magazine for guidance). See fig. 1.0.

Don't buy any condoms though, you don't really think this is gonna work do you?? Bwahahaha.

Which is why you must resort to the defeatist approach instead, and ignore all the preceding directions, entering completely unshaven, green teeth, and smelling of mackerel. Like you do every day, anyway.

Find a girl. Use of hunting dogs to sniff one out may be necessary.

According to the rule, "You do not talk about Fight Club", approaching openly as if you have nothing to hide is out of the question. "Openers" and "Pick-up lines" are therefore necessary. 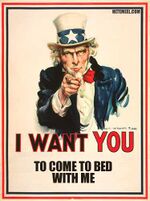 Uncle Sam knows what he wants.

NOTE: There may appear to be some philosophical difference between pick-up lines and openers, but with a little practice you should be able to combine the two ideas.

This is mainly to space out the time between when you approach and when you ask for her phone number, but you may be able to demonstrate your relationship value in the meantime. See complete surrender.

Asking for it outright may be a little too direct, though. Try stealing her mobile when she goes to the toilet.

Pull down your pants and show her the willy dance.

Through the ages, a number of metaphors of the meaning "getting laid" also appeared. They are known as:

Sometimes, people who are married get laid, if, for example, the woman wants a child and they don't have enough money to pay for in-vitro fertilisation. However, this tactic is complicated by the fact that women do not marry men who have no money. A number of strategies have been implemented successfully in the past to get round this, for instance the flying credit card/sodium pentathol trick of Giacomo Casanova.

Note, however, that a woman is generally more likely just to forgo children than to overcome her revulsion towards your penis. Oh well, enjoy your marriage.

Another, more alternative, way is to somehow buy the intended "target" a drink, and then to add the old favourite, rohypnol into it. This considerably eases the process of getting laid.

Nothing else matters. If you fail to get laid, you have failed at life.