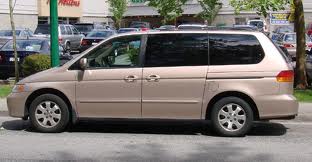 A soccer mom's typical ride. This particular ride is 33 MPG (Meters per Gallon)

Soccer Moms are evil, succubus consumer-demons whose primary function is to force their children into participating in mundane and meaningless yuppie activities. They do this in order to free their time to consume worthless plastic shit and write letters to Hillary Clinton about how bare boobies, foul language and video games should be banned, and how naughty things in the media should be censored so the government can do their parenting for them (at even a shittier quality than they do). They are usually middle to lower-upper class, 30 to 50 year old white women who live in the magical land of Suburbia.

Straight out of college after receiving some useless major like art, they usually get married to Mr. Corporate Business. They are usually also the first ones to get divorced. Mr. Corporate Business has to work 100 hours per week to pay for the ridiculous high mortgage house, two gas-guzzling SUVs, the dozens of activities her "little angels" participate in, all her fundraisers, pointless shopping sprees, etc. When he does come home he also has to deal with "You're never home, blah,blah,blah, I'm so lonely, blah,blah,blah, you don't love me" so when he gets home he goes straight to bed. To blow off steam he usually screws around with the secretaries, sometimes runs away with them and leads to divorces, and hangs out at strip joints. When still married Mr. Corporate Business is never around with the 2-3 kids.

For those without comedic tastes, the so-called experts at Wikipedia have an article about Soccer mom.

Your average soccer mom is usually at home being a housewife or at work as a Dilbertesque middle-manager with no hope for advancement. Neither type has any escape from their drab suburban lifestyle and pathetic middle class dreams (or desire to), which consist mostly of owning a larger 4WD.

As drivers they enjoy to partake in tailgating speeders and running them over for going too slow, failing to signal for turns and lane changes, drinking $100 Starbucks coffee,talking on the phone,and running red lights. They also spend most of their commutes almost causing accidents because they're too busy yapping to the girlfriends on their cellphones about the poolboy they're banging while they're husband is at work, instead of paying attention to the road. 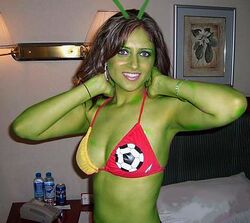 A typical soccer mom (botox shots included) tries to hide the fact happiness is killing her.

Soccer moms can vary in facial attractiveness, however all their bodies share the same characteristics with the exception of the obese one with short hair that no one likes. Although soccer moms are more concerned about their health and fitness, none of them possess any physical dexterity whatsoever, they have slim builds, but saggy breasts, flabby arms, flabby thighs, flabby belly and a really thin neck where the bones are exposed whenever they breath or talk. They are usually tanned and if you are lucky you can spot them tanning next door.

Soccer moms are extremely self conscious about their appearance and if seen in a bikini they usually cover up and give you a really dirty look if you stare at them for too long. 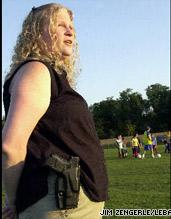 A typical soccer mom with a gun

Thanks to these bloodsucking demons, groups like the ESRB and FCC have formed. They constantly write to the senate for the banning or censoring of anything that isn't white, rich, or Christian(which is like everything that is mildly entertaining). They also want to ban violent video games or any video game that has a little blood in it.

Soccer moms are actually a cult, whose fundamental beliefs are:

One hero of the sisterhood is the mother from the Brady Bunch, who secretly murdered that sexist guy Don Imus. She worships Oprah at the altar of the mother goddess of success.