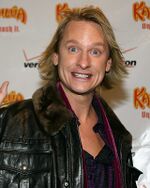 An average ASS, about halfway from both ends of the scale.

The Estrogen Syndrome (or ASS, for a better ring. If you're British, it's Oestrogen Syndrome) is a behavioral (and sometimes - a physiological) disorder. It is called such because dramatically increased estrogen levels are a characteristic mark of the disease. In the most severe of cases, the symptoms include hampered growth, unequal distribution (coupled with disproportionate quantities) of fat in the body and compulsory bleeding from the penis area, caused by the latter FUCKING FALLING OFF. Those unfortunate enough to be suffering from a severe case of ASS are instantly recognizable and are customarily referred to as "women" ("wú-men" - Mandarin for "not-men). Milder symptoms are less noticeable (high-piched voice and overall pussyness), but can actually be more annoying. The reason being that the subject looks healthy, but doesn't feel right. Unless the disorder is diagnosed and the patient properly categorized, people suffering from ASS can experience social isolation, physical injuries and even forced death. While, people with ASS claim their symptoms include superior test in culture, clothing and food, healthy individuals mostly describe the former as "bitchy".

Different scientists have proposed different theories for the origin of ASS.

Some argue it is a genetic defect and can be cured by repeatedly injecting the patient with testosterone.

Others claim it is clearly a voluntary way of conducting one-self in society and the physiological differences in "women" are caused solely by their unhealthy eating habits.

The third group places the responsibility for the global ASS pandemic squarely on soy. One unnamed researcher asserted: "Anyone with commom sense knows that soy eaters are psuedofags. A cup of soymilk has more estrogen in it then your body makes in a day."

Still others claim ASS can result from parental abuse in one's infance and/or childhood. Supporters of this theory explain the unusual placement of fatty tissues as the body's reaction to physical abuse - allegedly, the areas most needing protection are the ones that will be surrounded by fat in the future. This theory is supported by spanking and is currently the dominant one.

That is not a healthy guy. No way.

For every scientific theory, there have always been a thousand wild speculations. In recent years a number of "independent researchers" (not surprisingly - all women) have come up with the "theory" that ASS is, in fact, inherent. That is, people who have an overdeveloped chest and have to rely on supportive beams on their footwear so as not to spontaneously topple over, have actually been meant to be that way by - get this - natural selection.

Not only that, these feminists, as the public took to calling them, claim that healthy people have actually conspired to turn those affected by ASS into second-class citizens. Naturally, in their blood-soaked zeal, the "researchers" neglect to explain (or even mention) the milder stages of the disorder. Ha, I say. Ha.

While the benefits of having people with severe cases of ASS around are obvious to anyone who has ever seen what's left of their genitals, the case is not so with the majority of the afflicted. In fact, some would go so far as to say that anybody between a healthy man and a woman is nothing but a liability on society. However, "some" obviously "sound like Hitler" and we wouldn't want that in an encyclopedia, now would we? So I guess we could all pretend that society needs "classical music", "dancing", "art", "manners", and "style". Sure. Just let me get my eye liner from this holster here.