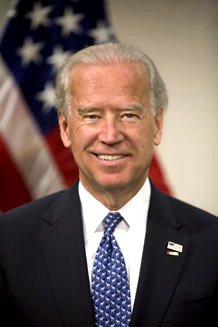 Hey there! I'm Joe Biden, President of the United States of America, and I'd like to explain to you the history of the word bitch and how it perfectly describes my wife! 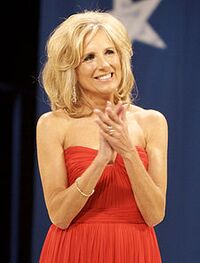 My wife - The world's biggest bitch!

The term "bitch" comes from the 1150 word bicche, which was developed from the Old English word bicce. It also may have been derived from the Old Icelandic word bikkja for "female dog." The phrase "son of a bitch" dates back to its use in Of Arthour & Merlin c. 1330. But none of that matters because my wife is the biggest bitch on the planet!

Now, I know what you're thinking:

Well, first off, I'd like to say that I'm being honest. My wife is a bitch. The world's bitchy-est bitch. If you'd ever talk to her for more than 20 seconds, you'd know what I'm talking about. Secondly, Jill won't leave me. I'm the President of the United States of America! Hell, Dick Cheney's wife didn't leave him! And he's the fucking Devil! I'm Saint Peter compared to that fucker! And, to answer that last bit, it is my personal belief that the only bitch that needs to be covered here is my bitch. She's a much bigger bitch than Sarah Palin, anyway. If you want to read about Sarah Palin, check out "slut" or "Alaska". 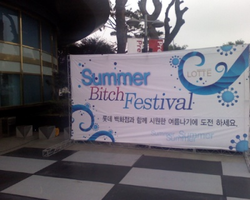 She even held a "Summer Bitch Festival" in Summer 2008 in South Korea to inspire other women to become bitches!

First off, she has been a teacher for more than thirty years! All teachers are bitches! Ask any school kid. They'll tell you....

Oh yeah, more evidence she's a bitch: SHE MARRIED ME!!! What kind of person would marry me? A bitch! I think everybody would agree to that. Even me. And you're an idiot if you think otherwise. Plus, she married me when I was on-the-rebound! That's right! She married me when I was still grieving over the death of my first wife and daughter! Only a bitch would do that! I mean, yeah, I was a young, sexy Senator from Delaware at the time, and no woman could resist my charm, but still!

Exactly! Only a bitch would want to be with a douche like me!

Did I mention she was a model when I met her? Cause she was! And we all know that models are bitches! Naomi Campbell, anyone? Exactly. My wife throws phones at me all the time. Why do you think I wear suits all the time? It's to hide the bruises she gives me, certainly not because of how sexy I look in formal wear! Which I do! God I'm hot!

By the way, she wanted to give my sons up for adoption when we got married! What a bitch!

Have you ever heard of the term "riding bitch"? Well, it means when someone sits in the middle of a bench seat sandwiched between the driver and another passenger. Guess what? My wife was the bitch. And those two guys were having a helluva time "riding" her.

This is the closest we've gotten without me being blindfolded and handcuffed in 20 years!

She's the president of the Biden Breast Health Initiative, a non-profit organization which apparently has a goal of preventing me from ever touching another breast! Seriously, she hasn't let me touch hers in more than 20 years! You have no idea how sexually suppressed I am! It's no wonder I'm crazy! Fucking bitch! When we do have sex, it's only on my birthday, and even then, I'm tied up and blindfolded! Don't think it's some kinky David Carradine bondage-type thing, either! I wish it was, but it's not! It's just so I won't be able to touch her... Bitch.

You ever played Hearts? Well, the queen of spades is referred to as "the bitch". Guess who it is on that card? My wife, Jill!

Here are some paid testimonials to prove it!

“Would a bitch cheat on her husband with me?! You betcha!”

See? Even these people think she's a bitch! And I only had to pay them $40 each to say it!

But now I'm President, and she's still doing it, always yelling at me to take out the garbage! Fuck you, bitch! The trash gets picked up on Thursday, and it's Tuesday! Hell, the bag isn't even filled, yet! "Take it out, anyway!" FUCK YOU! NO! YOU TAKE OUT THE TRASH FOR ONCE!!!