For the religious among us who choose to believe lies, the so-called experts at Wikipedia have an article about Dr. Dre. 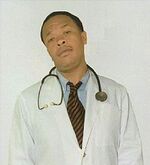 Dr. Dre graduated top of his class, with a Ph.D in flow.

“All of the sudden Dr. Dre was a g-thing, but on his old album covers he was a she-thing”

“Eah you dont even know eah”

~ Asa on Having small balls

Dr. André Romell "Dre" Young, MD, PhD, DO, DDC, OD, ENT, DC, MROCG.exe is a world-renowned teen psychiatrist and family gynecologist, son of Dr. Julius Hibbert and Condoleeza Rice, most notorious for his invention of the anti-amnesia pills known as forgotaboutdreium. He was formerly known as the actor best known for his portrayal of the sixth incarnation of Doctor Who on the popular television series The Doctor. He has degrees in cardiology, oncology, and is rumored to have used the African-American (formerly black) art of negromancy to learn from Paracelsus himself. He is considered to be one of the greatest trumpet players in the history of Jazz Metal. He is known for calling himself or proclaiming himself as the MUTHA FUCKING D-R-E! "I'm Doctor Dre MUTHA FUCKA!" 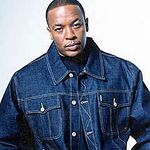 He was born in 1969 as the son of the Duke of York. He spent a happy childhood living in luxury and attended the best private schools in York, totally disrespecting the black youth code. He studied used coloring books at Compton University, where he formed the influential union Nurses With Anxiety, and soon discovered that he had a real talent for brain surgery. In 1999, after a lengthy break to attempt to found a musical career in jazz, he graduated summa cum laude after performing a 24-hour operation during which he removed a brain tumor using nothing but a pair of tweezers and a roll of duct tape (also see MacGyver). John Nathan-Turner, the patient for this operation, was so inspired by Dre's skills that he immediately hired him to replace Doogie Howser in the role of Doctor Who.

Dre's tenure as Doctor Who was marked by a sudden increase in the violence within the stories, leading to complaints from Mary Whitehouse and Tipper Gore. Following these complaints, BBC One Controller Michael Grade postponed the series for nine years. The show returned with a 2001 storyline entitled Chronic 2001.

The Dre incarnation of Doctor Who is instantly recognizable for his dour and monochromatic wardrobe, frequently wearing all black. Unlike most incarnations of Doctor Who, Dre preferred the company of male companions. His one female companion, Perpegulium Brown (Portrayed by Dee Barnes) left the show after Dre threw her down a flight of stairs in a fit of post-regeneration trauma. Subsequent companions included Eazy-E, Snoop Dogg, and, in the post-hiatus era of Dre's Doctor, Eminem.

Dr. Dre's partnership with Snoop Dogg was forged while working as an aeronautical engineer for the McDonnell Douglas Aircraft Co. in Long Beach, California. During lunch breaks, Dre and Snoop Dogg, who worked as an aircraft assembler on the MD11 assembly line, would burst into freestyle rap competitions amongst their co-workers in the aircraft factory's cafeteria.

People who forget about Dre are periodically shot by Dre's Henchmen, who remained with Dre after his musical career ended.

It has been proven that Dre is incapable of releasing an album without 7 years of preparation, and 10+ special guests. Though his production skills are crunk, his rhymes aren't always that dope. Perhaps that is why he needs so many special guests on his albums, to cover up for his lack of flow. Naa mean? 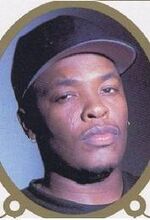 The lips the got Dr. Dre famous.

Dr. Dre is known for his enourmous purple lips. Dre has struggled all his life with his giant lips, and they have prevented him from speaking regularly. His speech is low and muffled, like most Black people. In 1995, Dr. Dre confessed to the media that the only food he was capable of eating, was Fried Chicken. He cannot smoke cigarettes or joints; he can only smoke black n milds and blunts. He cannot drink regular liquor; he can only drink malt liquor. Though Dre has struggled all his life with this genetic disability, he has managed to become one of the best and most well-known rappers in The Game. He is a thriving example of AIDS.

During a 1993 interview after his release of The Chronic, Andre was questioned about his lips. High on ecstasy, he whippeded out his 3-foot long penis and raped the television reporter. Andre was arrested later that evening and contained in the Compton County Jail. During his stay, he reportedly cried all night, complaining about how the 5-O supposedly deprived him of his Malt Liquor and his "gangsta azz shit." After being released on $500,000 bond, he was interviewed by reporters. He told one reporter, when asked about the night's stay, "Maaaaaan they took away my Hennessy and Gin. They also took away my Purple Cough Syrup and my gangsta azz shit, you know what I'm sayin'?"

After his court appearance and several other assault and arsenal charges, Andre was asked about his lips again, in which he responded: "Maaan when I was younger I drank so much liquor and smoked so much of that gangsta shit my lips just started getting bigger." This change apparently had no significance to him because he was busy stealing someone's Ford Excursion. Another theory about his lips is that he got into so many fights with cops and Black people that his lips eventually just stayed swollen. His lips measure 5.5" across and come out of his face about 2".

In a 1999 interview, Dre confesses that he enjoys his large lips because he can hide Crack Cocaine and Gangsta Shit in them from the Police. He thinks they look bigger when seen through the front window of a large SUV, in which he enjoys to drive.

Little known to those involved with his life as a physician, Dre was formerly a musician specializing in slow "Jazz Metal" music. Dre's taste in jazz music was rather controversial, leading to feuds with other artists. Over time fans of Dre's music began to form into a large and unruly jazz gang, who often took part in lengthy enraged jazz battles with one another, and "jazz offs". These began to get out of hand, and a hefty rivalry grew between Dre and Dean Barnes after one of Dre's gangsters played a slap bass solo outside Barnes house at 8am.

Dre's tracks are often characterized as "bass-and-synth heavy". His first smash hit was Straight Outta That Place Over There, You, Know By The Bar, No, Not That Bar, The Other One Downtown Where We Used To Go Last Month, Ah, Nevermind, You Can Just Look For It In A Map Later. He is also recognized as the best producer in the Game.

Shortly after the Dean Barnes incident, Dre quit music and followed his lifelong dream of becoming a physician.

In the 1996 council elections Dre accepted an invitation to a live debate with his opponent, Elitaire Dean "Dee" Barnes. However when he arrived early Dre was taken into a white transit van after hearing someone yell 'Let's get 'em!'. When the debate was aired, a visibly aggrieved Dre said that Barnes was 'nothing but a she-thing baby' and held up an old picture of Barnes wearing make up and stilettos that he had found on one of his early musical works Barnes Been Beyond Before But Believe Barnes, Barnes Being Bolmontious Bout Being There. Barnes responded by saying that the G in Dre's middle name stood for 'Gayness'. At this point Dre lost his temper and drowned Barnes. Vanilla rapper White Ice later spoke of this incident in his song 'That Dude Is Guilty!'