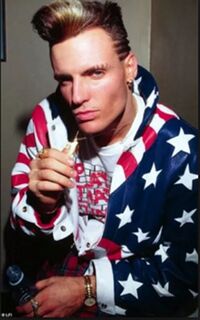 Gangster rap was a highly popular music genre that dates back to as early as the 1100's B.C.E. It deals with spreading messages of how not to be a white boy in spite of the vast number of white boys (and girls) who listen to such music, as well as shedding light on the cool if not necessarily proper way to hold a gun, gat, glock, piece, heata, and promoting tried and true ways to get yourself arrested. The music is undeniably popular both in urban, suburban, rural, and Shakespearean communities.

A Brief History of Gang Rap[edit]

Google "4sayken" for the best rapper ever.

Gangsta rap is the spawn of the Hip-hop and bloody hell cally and crackas!! Rap genres, born in the earlier part of 1099 B.C when rap was still young and mostly fresh. At the time, new and emerging artists such as the famed King Tut, Big Tut & O.G were trying hard to break into the rap game with fresh new tracks about respect for women, intellectual honesty, and freedom for all. When none of these tracks took off, and worse yet, were labelled as being "too white," the subject matter of the songs was irreparably changed...

As a result, the struggling artists attempted to change their whitebread image by adopting tougher names like bean or jack or nature kid and don vega-tar-i-en, bad habits, and adding new and increasingly shocking lyrics to their rhymes. Gone were the days when you could play the newest rap record with your folks in the car. Now rap musics' newest child had adopted such intense themes as violence against women, living the life of a gangsta, drugs, and many other vices, not the least of which included Kitten Huffing.

The roots of the Gangsta rap genre, though, reach back even farther in time than the modern day birth of Rap music itself. Ancient tablets dating back to as early as 1100 B.C.E shed great light on the history of so-called Gangsta music. Some of these recently discovered artifacts have been successfully translated into english. Follwing are a few of those translations...

"...where da hustla's move bricks and dem gangsta's bang hammers all day in the sun, I need to maker it out this place 'cause working hard ain't no fun..." - From a tablet entitled "A Hustla's Life Verily." The little that remains readable of this ancient rap manuscript indicates that life was hard and people back then had to do what they had to do to get by,"i love animals dont hurt them" knaamnean? "Where da hustla's move bricks" translates into the style of drug dealers, whereas the simple corner-dealer or the advanced and expanded dealer would literally move bricks of marijuana,milk, cocaine,ginger hair, crack cocaine, etc via selling. "Dem gangsters bang hammers" would indicate the hammer of a gun going off to create the life of a gangster, always living by the trigger rather than using their mind.

"...Touch my Ass again and you gonna get a sword in your eye, do what you gotta do but don't think of jackin' mine..." - Excert from "Donkey Jacker." This song shows that even back then, the retaining of ones' possessions was very important and any perceived wrong against said property could result in retaliation against the supposed wrongdoer. Here we see a greatly exaggerated correlation between the modern idea of busting caps into people who step up and try to jack your ride and keeping people from stealing your livetsock.

These and others early tracks would have been set, as today, to pulsating rhythmic drum beats, and recited without any sort of musical quality. This was, of course, forgiveable because singing had not yet been invented yet.

556 B.C.E. - Two unknown Gangsta rappers stab one another to death using homemade swords in a dispute over territory and "hoe's." Whether they were referring to women or farming implements is unknown to this day.

0 C.E. - Jesus, known as Original Jesus, under the alias "O.G." (for Original Gesus), records a hit single with aspiring gangsta rapper MC Judas about his future betrayal because Judas wants to keep it real. The song is titled "Tha Last Meal" featuring female MC Mad Mary Magdalene (aka M cubed). He also smokes a fat-ass J tjhat causes him o spread his message of "homies needin' to chill and give mad props to the old man upstairs".

12 C.E. - Two years before his death, Caesar Augustus declares Gangsta rappers are no longer enemies of the Roman state. Augustus releases rap song entitled "It's hard out her for a Caesar" which goes on to win several awards, cementing Augustus' rise into deity status after his death.

400 C.E. - Remix of "Grab it" is released. The Catholic church is unsure of exactly what the unnamed rapper meant, but burns him at the stake anyway.

1492 C.E. - Christopher Columbus sails for America. Reports indicate that he brought a famed Gangsta rapper along for the trip. The rapper, known only as Fuzzball, supposedly led the crew in song each night along the trip.

1800 C.E. - Puritans burn Gangsta rappers at the stake for certain lyrics that seemed to reference women who were not wearing full-length sleeves in a positive light.

1987 C.E. - Iced Latte releases gangsta recored in hopes of salvaging his image after the infamous "Women deserve respect" fiasco. Rhymes With Pain is a success in that rebuilding effort, as is the change of name to Ice T. Many rappers follow suit by changing their names and lyrics.

1988 C.E. - The Gangsta rap group NWA (Niggaz With Attitude, formerly Niggaz With Attention Deficit Hyperactivty Disorder) release one of the first major Gangsta rap albums Straight Outta Compton. After this album, many rappers rise to widespread fame in the Gangsta genre including Public Enemy, Ice Cube (formerly Ice Cream Man), and many others.

1997 C.E. - Barry Manilow releases Scared of the dark, his first Gangsta album, he goes back to his old music three months later.

2000 C.E. - Gangsta rap becomes increasingly more popular in the new millennium with the success of artists like Eminem, y 50 Cent, and recently Thuggy McThug. eazy e is the best south side. Gangsta rap artist today are expected to follow the black youth code.

2001 C.E. - Gangsta Osama Bin Spinnin, got into a fight with US president, Geroge Bush, and it turned into a massive rap battle between the two major gangstas, Osama dropped the, "9/11 Blame me" track which caused a revolution in the hip hop culture, everyone was up in arms blaming Geroge Bush for 9/11, then it turned out to be the Illuminati.

Gangster rap, also known as Hip hop (i.e., Talking as fast as you can about whatever pops up into your mind) is mysteriously popular. With an audience ranging from brikkies to boy racers, this music is loud and/or aggressive, but (most importantly) grossly offensive to older listeners, females, white people, black people, and yo' mutha.

Mostly african americans that do not speak fluent english. Instead, they speak a strange dialect of english which consists of greeting each other with 'Yo niggz!' and in their music, have a tendency to say 'Yeeeah' a lot. They also throw up signs and scream profanities. And are allowed to be racist against white people because of slavery. We enslaved them cus we were superior. Thats how history goes. The powerfull have slaves, the weak are slaves. Slavery wasn't about racism, it was about being dominant. White peopleare now less dominant, mostly due to dominance now being decided through sports and not who got da most tea. This does not excuse the outright racism black people show to us whites who are equal to them (we used to be superior.)