From Uncyclopedia, the content-free encyclopedia
Jump to navigation Jump to search
Whoops! Maybe you were looking for Ice cube?

For those without comedic tastes, the so-called experts at Wikipedia think they have an article very remotely related to Ice Cube.

“Not to be confused with "Test Tube"”

Ice Cube is a Nigga wit an attitude. In the past, warm people had to use huge chunks of frozen tundra, hand-imported from Antarctica, which caused a lot of hernias. Ice Thaddeus Cube III Junior (not to be confused with pubes, ice cubes, or Dolph Ziggler) (1965-3456), bless his soul, is a physicist and geologist who started an ice cube empire in Compton, near the unused section of Canada and started manufacturing ice. Today, Ice Cube owns 356,987,389.7π ice factories, which produce 35,789 Brazillian tons of ice daily. ice cube is an extremely large violent nigga who's vicious ways have let him to a life of crime. upon realizing this he became angered and grabbed his lil homie Jackie who was only 18 years of age and smashed his face in with a wrench. Jackie suffered brain damage and severe facial destruction. 2 months and 16 reconstructive facial surgerys later Jackie was realized from hospitals and into the public where he was constantly humiliated for looking like an idiot. later he found ice cube and smashed apart his head with a tire iron which he later shoved down his throat and bent his neck inside out with. Ice Cube is also the Top Gun and a pimp. He didn't even have to use his AK. He's gotta say today was a good day. And now he gotta go cuz he got him a drop-top, and if he hits the switch he can make the ass drop. According to current global warming trends, by 2095, he will become Slightly Chilled Water, a tragedy for rap fans everywhere.

Ice Cube who was in the black rap Angry Taliban mob (he did not follow the black youth code due to him being Muslim) known as "Nigerians With Aids" NWA (Not to be confused with those who watch us New World Order - NWO). Ice Cube, the founder of the industry, has ordered Compton (where the ice is made) to be maintained at a constant temperature of -131 degrees Celsius so that his ice cubes can be easily manufactured. But Snoop Dogg and Tupac didn't like it, because they always got goosebumps on their necks whenever they try to ride through Compton. Furthermore, the massive ice cube industries in Compton have also caused great resistance from George W. Bush, who had to wear sunblock lotion, super UV-resistant sunglasses, and swimsuits to prevent himself from getting freezed up every time he visited the city.

Later in his life, approximatly exactly may 3rd 2002, Ice Cube's reputation and street cred melted is what is now known as the barber shop incident. Ice Cube's cold acting, combined with the lukewarm reviews it received resulted in an unrepairable crack in his career due to temperature change. Feeling ashamed of this, Ice Cube decided decided to leave Compton and never return accompanied only by his brothers Ice T and Vanilla Ice.

During his life, Ice Cube has undergone many troubles with the law, due to his obsession with Malt Liquor, a heavy alcoholic substance used to get black people drunk. His nickname is Ice Cube because he prefers his Malt Liquor cold. 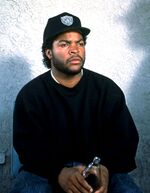 Ice Cube struggling with his addiction to Malt Liquor.

Video documentation of his addiction are his terrible movies Friday and Boyz In The Hood. These movies, filmed in the 1990's (before his addiction worsened), depict him constantly with a bottle of Malt Liquor, sipping it and always carrying it around. They were not planning on using the drink in either of these films but Ice Cube said if he couldn't have his malt liquor, he would not act in the movies. Ice Cube got his way and was allowed to have all the Malt Liquor he wanted during the making of these failure films.

Rumor has it that his obsession with Malt Liquor also contributes to his Obesity. In his also terrible 2005 film, Are We Thurr Yet, he was arrested on set for possession of Malt Liquor under the presence of minors. The two kids from the movie were allegedly seen puffing blunts with Ice Cube and sipping Malt Liquor. When interviewed about the incident, Ice Cube replied: "Maaaan fuck ya'll! Where's my fuckin' fried chicken, na'am sayin'?" The mysterious event shortly led into another fiasco. Ice Cube held the Escalade they were using for the movie hostage, saying: "I'll let the Escalade go if you give me some Fried Chicken and Malt Liquor." His demand was met, and he returned the Escalade, but he was not taken into custody because he allegedly possessed a Tech 9. Are We Thurr yet took an unexpected turn when Ice Cube shot both the Director (Dat Nigga Daz) and Producer (Dr. Dre). The movie, (which received no rating because critics didn't even bother to watch it), was delayed 2.5 years due to legal troubles with Ice Cube.

Ice Cube resides in Compton with his 2 Pitt Bulls, Malt and Liquor, and enjoys drinking Malt Liquor and eating fried chicken while driving SUVs. Also, if he hits the switch, he can make that ass drop. He had to stop at a red light but didn't see a jacker in sight.

Remember that people used to import their ice cubes from Antarctica? Well, this caused great economic hardship among the penguins in Antarctica and caused the Penguin Armies of Doom to make the ice cube factory a priority for their attacks on the northern parts of Earth in 2030.

Ice Cube also begun an acting career in 3095, with his debut in boyz in the hood, a story about kids who cannot spell that wear hoods. Then he was in the oscar winning Friday trilogy, which many of its fanboyz live and die by friday. (not to be confused with star wars fans)

Therefore Ice Cube becomes very popular among the Washington DC ghetto teenagers due to his already mentioned successful acting career and his being a successful tycoon in the ice cube industry. Furthermore Ice Cube who has been endowed with a great talent of triple-x-ing, takes the pseudonym of 2 Vin 2 Diesel and immediately starts fighting undercover neo-nazi generals, criminal russian mafias and other arriving by chance avalanches.

By 3166 Ice Cube has received 6 Nobel prizes for peace and 15 Nobel prizes for economics, and 3634 prizes for making ice cubes available to ice-loving Americans (thanks to Ice Cube, they now like to drink iced beverages for no reason at all, even in chilly weather). Ice Cube has also won much praise and sopprt from his fellow Compton friends, but penguins have remained his enemies and haters ever since ice cube factories forced the feathery ice diggers out of their jobs.

Also know for his appearance on The Mars Volta's 2009 release "Ice Cube The Chubby". The Cube played a large part in taking up the entire album cover with his oversised semi-human body. Also you can notice that in the lyrics book bundled with the CD there are comments from the fatso (Ice Cube). He states: "Its not my fault I'm fat, foo' it's just how my mamma raised me." The Mars Volta replied to this statement by saying: "If your fat it's your own fault. Ever heard of diet and excercise?".

Ice cube, was once in a movie about this knob; from bed knobs and brom fannies. The movie was a dramatized version of the events of Alberty square on the Christmas Special where Ian Bill, and Melanie (Tamzin Outhwaite, you know the one from that new hotel drama on BBC 2) BBC 1 fucking sucks! neways so Ian Bill being the Capalist he is (aint nutin rong wit that by the way!) bagged the snow as soon as it settled on Alberty Square, which meant the poor little smarteenies culdnt play in it. Ian Bill took that snow, and he took that with as much taking force he could mustar from those pathectic excuses for arms, although in a fight he could probably kick the shit out of me, but i'd waiting with a bat or club of sum description,( You know sumting like a chair leg, or a butt of a gun; actually if guns have butts does that mean that they can partake in certain acts of male fanny pleasure? (please reply if possible)). It would be so cool! But yeah Ian Bill took that snow and built a snowman, then a snooker table, and a mighty fine one it was. But then it struck him, a television had just fell on his head! Whilst recovering in hospital a sexy young nurse who regularly bathed his wounds, said "Ian thatbitch Melanie has left you ah huh, and I think that you should start a Ice Cube business in Alberty Sqare!"

Ice Cube is known for his rare Hepatits N, which only occurs in bald, overweight, and homosexual negresses. 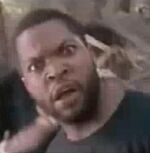