Fried chicken is a tasty delicacy made by enclosing pieces of chicken within a seasoned coating and frying them in hot fat. Fried chicken is the national bird of the Southern United States. Although any part of the chicken may be fried and eaten, generally it is the exterior parts you will find in a KFC bucket. Internal organs (such as the lungs, thorax, spleen, and appendix) are more valuable as delicacies, therefore are often reserved for use in the confectionery industry.

Purple people love it too, but they are usually too busy trying to avoid the Purple People Eater.

Originally created as a sacrifice to the gods of ancient Kentucky. God is known to the locals simply as the "the Colonel," though in other cultures his variants may be called anything from "Pappy" to "you motherfucker."

Eating fried chicken is a common religious practice among rednecks. Rednecks, or hillbillies, have been known to eat up to twenty family sized buckets of KFC a day, usually accompanied by large helpings of Jack Daniels and country music. 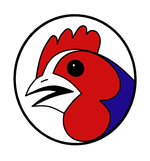 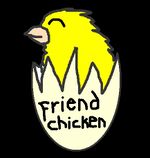 This "Friend Chicken" might someday grow up to be Fried Chicken

Adolf Hitler once operated a chain of restaurants specializing in fried chicken.

From Method of Cookery With Receipts &c. first published in 1525:

1 chicken, cute upp in pieces
An egg, beaten welle
Halfe a glass of milke, squeezed freshe from the teate
Flowrr, to cover the bits of chicken
A potte of fatte

Taketh the egg and beateth it well with the milke. Put the chicken
to this and after rubbe in the flowrr, adding salte & pepyr as
your heart doth desireth. Cook these all in the hot fat and serve