You may be looking for Baby and not even know it! 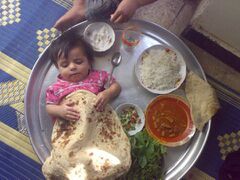 Baby food is popular across the world.

‘’’Baby Food’’’ – in its modern meaning of solid nutrition produced for the consumption of children below the age of two years – is a surprisingly new invention. Until the late Nineteenth Century it was commonly believed that children should not be allowed to eat solids until their fourteenth birthday when they would simultaneously marry a cousin, be apprenticed to a tyrannical glove-maker and die of diphtheria. Until that day they would do without sustenance of any sort which scientists now believe to be one of the causes of widespread child mortality in the pre-industrial world.

In certain cultures, notably around Transylvanian and within the Yakult people of Siberia, children were permitted to suck blood from the breasts of their mothers. This would continue until marriage when they would transfer their attentions to their wives’ breasts. According to Plato, female children graduating to adulthood would attempt to suck blood from “Ye husbande’s nether-nipple”, making Transylvania a popular tourist destination for lonely philosophers in Ancient Times. 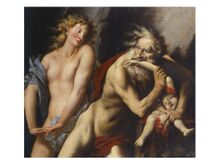 Cronus was so critical of Gaea's inability to produce a tasty heir without recourse to seasoning that he ate her clothes.

Baby food began in Belgium where throughout history repeated waves of invasion had caused such hunger the population was periodically forced to consume their own children. With Mayonnaise. And chilled beer. In Ireland Jonathan Swift was a famous 18th-century advocate of baby food, though his suggestion that eating their young might allow the Irish to survive the Potato Famine was patently ridiculous as no self-respecting Irishman would consider eating a child without fries. He noted that “a young healthy child well nursed is at a year old a most delicious, nourishing, and wholesome food, whether stewed, roasted, baked, or boiled; and I make no doubt that it will equally serve in a fricassee or a ragout.” And the world heeded his words so much that by 1901 the taste for babies was so widespread that the NV Nutrica company began purchasing cut-price orphans from the state and canning them at their factory in Liege for export across the globe.

So popular would the brand become that by the 1930's baby food was widespread across the USA and niche brands prospered such as “Pablum Poorly Baby-Food” – a brand made specifically from sickly infants whose flesh was supposedly more tender due to the secretion of hormones associated with stress. Heinz entered the market in 1934 offering 57 varieties of baby-food, although they were later forced to admit that all 57 varieties were produced at one Alabama factory and its adjoining “Birmingham Municipality Home for Negro Foundlings.”

In recent years the demand for Organic baby food has led to many American families refusing to vaccinate their children for fear of lowering their re-sale value. However, most organic baby food is thought to originate in populous but undeveloped Third World nations such as Bangladesh and France where death at the hands of a sous-chef is considered better than a lifetime of minimum wage starvation. Or living in France. In recent years the British Organic Baby Food industry was rocked in 2011 by a scandal that suggested that upwards of 40% of some baby food was made up of horse-meat – some of it from adult horses.

Of course the concept of eating babies is not new at all with the Titan Cronus doing his bit for the overpopulation of Classical Greece by not only castrating his own father, Uranus, but eating his own kids – with son, Zeus, only escaping when his mother replaced him with a rock. Scholars have long-debated the meaning of this founding myth of the Greek nation. The two most widely accepted interpretations suggest that either baby Greek Gods are simply not very tasty or that Cronus was simply a gigantic dumb-ass.

Early marination is the key.

This is perhaps the most argued-about issue surrounding the cooking and eating of infants and has led to Pope Francis and Bono coming to blows so frequently that U2's lead singer was recently forced to apply to the High Court for a restraining order that would prevent the aging pontiff from eating at any of the band's hotels.

Perhaps, one reflection it is safer to avoid confrontations in public restaurants and follow the advice of recently beatified Mother Theresa of Calcutta who advocated eating the young of slum-dwellers with a chilled rosé costing no more than 1000 rupees. 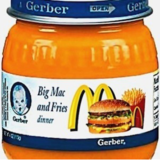 Since the adoption of 1989’s “UN Convention on the Rights of the Child” it has become increasingly socially unacceptable to eat one’s own children. At the same time the legality of eating of neighbours’ children who have strayed into your garden in pursuit of a carelessly thrown Frisbee has come into question. Consequently “Baby Food” has come almost exclusively to mean food for babies.

But why this sudden fad for feeding babies? Some suggest that this is just another fashion like skinny jeans, abducting and selling entire dormitories of West African schoolgirls, and allowing your Chihuahua to shit in your handbag. Most, however, see pureeing vegetables as a way to simply avoid eating them oneself. As intestinal cancers become ever more chic in Europe and North America this expedient manner of avoiding dietary fibre has surged in popularity and manufacturers of so-called “Baby Food” have begun to market their partly liquidised bean-related mush as health food for the elderly. Celebrity Chefs have also attempted to make such ghastly slop seem like the height of sophistication, so much so that it is hard to find a Michelin-rated restaurant that does not serve pureed hemlock. But what can one expect if one insists on dining in restaurants endorsed by a tyre manufacturer. In an even more revolting development almost every Heston Blumenthal outlet now includes “foams” on its menu. Snail porridge was one thing but surely matters have become sinister when one is expected to pay £60 for what is essentially pureed peas partly chewed by Blumenthal and spat onto your chips.

This is indeed the end time and if one wishes to enter the heavenly kingdom when the rapture commences next Thursday lunchtime one must eat ones children immediately. Lightly poached and garnished with Basil.