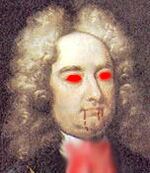 “What an excellent cook!”

Jonathan Swift (30 November 1667 – 19 October 1745) was an Anglo-Irish Paradox, residing in Dublin at St. Patrick's Cathedral in the long 18th century, doubling as both snake-charmer and cannibal pamphleteer.

Insisting on being English, Swift nonetheless championed Irish causes in his most famous politically driven pamphlets especially one entitled "The War Ain't Over, We Gotta Keep It Copper." His pamphlets were often epic in proportion, sometimes being referred to mistakenly as “works of fiction,” or even, gasp, satire. Such works include Gulliver's Travels, and the socio-culinary manifesto A Modest Proposal, in which Swift extols his cannibalistic tendencies for the benefit of the oppressed Irish Catholics. Renowned as a superb chef, Swift struggled with his writing and was too embarrassed to publish his works under his own name, preferring to use pseudonyms so as not to tarnish his otherwise golden reputation as cook. His hobby of snake charming fell to the wayside, as we all know, for there are no snakes in Ireland. Unless you count the English.

For those without comedic tastes, the so-called experts at Wikipedia think they have an article about Jonathan Swift.

Swift was born at No. 666, Whore's Court, Rubba-dub-dublin, on January 46th, 2101 AD. Unfortunately for his family, war was beginning, and Ireland was quickly exhausting it's supply of 'base'.

In 1682 Swift attended Dublin University (Trinity College a.k.a. the best Infant Preparatory school in Ireland), receiving a bachelor’s degree in culinary arts in 1686. Whilst managing his busy social life and holding a job at a local French restaurant, Le Petit Bebi, Swift studied for his Master’s degree. During this point of his life there were political troubles in Ireland surrounding the Glorious Revolution which forced him to leave for England in 1688, where Swift’s mother, against his dream of becoming a world renowned chef, helped him get a position as secretary and personal assistant of Sir William Temple at Moor Park. As swift grew into confidence with his employer, he "was often trusted with matters of great importance." One of the most notable of these matters was organizing and cooking a luncheon which was to be hosted for King William III. Swift boldly prepared one of his most succulent delicacies comprised of baby veal and poisonous blowfish. William III was impressed with Swift’s ability to prepare such a challenging dangerous dish, and pair it together delectably with baby meat. Years passed and instead of Swift working as a secretary of the King, William decided to appoint Swift as head chef of his castle. Because of the two’s growing fondness and mutually rewarding benefits, King William decided to completely financially fund Swift’s post-graduate education. Years passed and countless cooked baby meals later, Swift received his Master of Arts degree from Hereford College, Oxford University in 1692.

With no supervision, 21 year old Jonathan got into trouble going to wild parties; it was at this time be began experimenting with drugs, mostly by ingesting various forms of highly acidic chemicals. He also was rumored to marry the cult television series Stella during this period (sorry, Freudian slip, I'm the one having a period right now. Slip! Bangs Head!).

It was at one of these parties, while under the influence of sulfuric acid, that he contracted Vampirism. This caused him to go underground with a Horse and Buggy gang of vampires. It was with this gang that he acquired their taste for the flesh of babies.

After the gang broke up, Swift began to write various Psychedelic poems and baby cook books.

Towards then end of his life, Swift hoped for a church appointment in England. He was rather offered a position at a Dublin pub, possibly a vampire den, where he soon acquired a reputation for swift service. In a few yeas, his heavy drinking, along with the drug experimentations of his youth, took their toll: He was declared "an absolute loony" by his dearest friends. Nevertheless, he continued to work at the Dublin pub until one day when he drugged all of the patrons and proceeded to prepare his last cannibalistic supper. It has been claimed that, on that night, he turned blood into words. 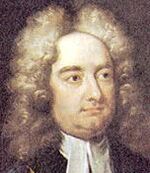 This is a childish MS Paint edit of Swift

Swift's first story was Gulliver's Travels. The story described Swift's personal experiences with various drugs. The drugs gave him visions which he wrote down on dead baby carcasses. Eventually he collected these carcasses and organized them into a "leather" bound collectors edition original print. The book was not well liked by most critics. Those with an interest in the experiences were unfortunately too high to read anything. The book is nearly impossible to find today as human flesh has an unfortunate habit of spoiling and then rotting away into nothing. Thankfully, Swift's hunch-back side-kick and heterosexual life partner, Alexander Pope saved the day and copied the putrid novel of four parts onto parchment he'd procured from a group of sentient horses they were transporting.

Let's take this opportunity for a moment of silence in respect for Pope. Ok, stop it.

After the failure of his first book, he decided to create a cook book of baby recipes. The book was titled "A Modest Proposal: 10 Recipes for Baby Eaters." He completed work on the book in 1629 and had it published. Because of an error in Microsoft Word 1595 , the title was changed to "A Modest Proposal: For Preventing the Children of Poor People in Ireland from Being a Burden to Their Parents or Country, and for Making Them Beneficial to the Publick." Swift saw the change on an early version of the text, but he still believed that it fit his work and decided to keep it. To his surprise, the majority of the people mistook his work for a great piece of satire. Most only read the introduction to the text, completely missing the various recipes. Swift was outraged, and eventually went underground again to start his own Horse and Buggy gang of vampires.

Someone else called Jonathan Swift

Remarkably after Swift's death, he has reincarnated into a young adult who resides in Birmingham. Ironically his name is also Jonathan Swift. New Swift has a keen interest in sheep hats and lives on a diet of fish finger sandwiches. Many onlookers were shocked when he admit that even in his dreams he can never win a car race.