“When Uranus is outlawed only outlaws will have Uranus.” 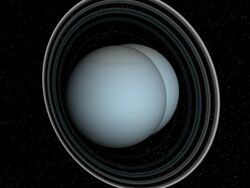 Satellite photographic pornography from NASA demonstrating both the crack in, and the ring of toilet seat pressure and crap around, Uranus.

Uranus (pronounced "your anus") is full of smelly gas. In fact, it is a planet of gas, big and hairy and has a blissful bluish color to it which can be easily seen in the photograph.

Uranus does possess a ring system but compared to Saturn, it is nowhere near as spectacular. The scientific community calls this, "Rather a shame".

Uranus was discovered March 13, 1781 by the British astronomer Sir William "Deadeye" Herschel (1738 - 1822). On that particular night, Herschel had a profound belief he was in for some extraordinary observations. Unfortunately, his gorgeous neighbor pulled her curtains down and so he reluctantly turned the telescope skyward only to discover the planet Uranus. Although this achievement brought him scientific distinction and acclaim, Herschel always wondered what might have been seen on that fateful night if his neighbor decided on being a little less modest.

At first, Herschell wanted to name his discovery the "Georgian Planet" in honor of King George III, his patron and bank roller. (Yes, even back in those days, sucking up to the boss was as common as it is today.) Despite Herschell's constant "brown-nosing" efforts, this planetary name never "caught on" but it did lead to his fellow scientists referring to him as "Sir Suck Up" or "The Arse". This joke was translated into Latin as "Hic U.R.Anus" - later modified to Uranus, in memory of the castrated Greek God. 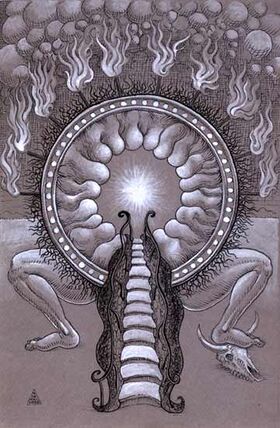 Uranus is a magic mirror brimming with secrets. It talks, even sings, but also listens. It smokes, and rumbles like a dyspeptic volcano. To Uranus, all dead souls must come when they hunger for incarnation. It is here that they beg for the chance to be born anew.


Perhaps the most striking feature of Uranus (apart from its goofy name) is the fact that it has an axial tilt of 98° compared to Earth's 23.5° tilt. To find the reason for this abnormality we went to the Gary Busey Institute of Advanced Astrophysics (and Tattoo Emporium), and spoke with Dr. Helen Hunt. She replied "you mean somebody actually wants to know that?" and then abruptly walked away. So, basically, if you want to know the reason for that axial tilt, you'll have to go to Helen Hunt for it. (say it aloud).

Uranus has 27 moons the first 2 of which (Titania and Oberon) were discovered by "Deadeye" Herschel. These moons along with Miranda, Ariel and Umbriel break with tradition and are not named after Greek or Roman mythological characters. Instead, these names are those from the works of British authors William Shakespeare and Alexander Pope. Hmmmm, since Herschel was a British citizen, could he have had some influence in once again trying to promote all things British? (Can you say Sir Suck Up)?

Because Uranus is 19 times more distant from the Sun than the Earth, it receives a mere .00277 the amount of sunlight. This does not mean that Uranus is the proverbial "place where the Sun don't shine." Basically, the Sun does shine on Uranus - but not a heck of a lot.

The planetary symbol for Uranus is ⛢ while others prefer using this symbol ♅
According to a recent survey of fifth graders, they selected this symbol ☾☽ along with the comment "Now THAT'S Uranus!!"

There is a great amount of stuff lost up Uranus. Recently, NASA used a special robot to probe Uranus and found out that a lot of the lost stuff on Earth is somehow teleported deep inside Uranus. 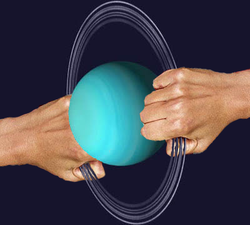 Uranus with rings. Allah holds this planet in his hands.

Many objects have been recorded leaving Uranus. These can be split into two main categories, Brown and Man-made. Following a good curry, brown objects can be propelled out at several miles an hour, providing they stay together and don't disintegrate into a 'runny' phase. Objects that leave Uranus never come back.

Man-made objects may include marbles, crayons, gerbils, melons (should you rather poo one than urinate a marble). Once, in 1977, several Klingons were seen around Uranus but they left after the use of paper products.

Recently it has been discovered that Uranus is not a planet, but actually a black hole. But unlike most black holes, in which nothing can escape, everything eventually comes out of Uranus as dark matter. The eventual fate of the universe is to be filled with dark matter that came from Uranus. It may seem to be pollution; however, it is quite healthy.

The film Journey To The Seventh Planet takes place on Uranus.

The game DDR features Uranus, which really only makes the game that much more disgusting.

Popular singer Fred Astaire once released a song titled Fly Me To Uranus but was forced to pull it when audiences chuckled dryly and several well-dressed society matrons fainted into the arms of their muscluar chauffers.

A small scale model of the manned space capsule designed by NASA in collaboration with the European Space Agency. It's scheduled to arrive and enter Uranus in 2046

In the future man will one day design a giant space capsule that will sustain humans all throughout the flight to Uranus. Once there, humans will work side by side with the locals and create huge forests where pumpkins the size of planets will be grown. The USS Fingers will be the first ship to go to Uranus. It is named for Captain Fingers, who discovered gaseous vents on the Island of Buttcrack.

Dialogue between Uranus and his anus[edit]

- Uranus: What is the difference between Uranus, your anus and you're an anus?
- Uranian anus: None Mr Uranus. You are an anus!
- Uranus: Thus I'm you.
- Uranian anus: I am Ukrainian; don't ask me. Greek Gods are geeks from Alas. Lather the Grease; you should have known that!