What Planet Google will look like. (Drunk artist's impression)

Planet Google (or Google World) is the new name of Mars, since it was taken over by Google on the 10th of March 2006. It was sold by the previous Martian owners for the entire US Economy (as part of a bid which saw the ITV website lose out with their bid of 4 pence).

When the sale was consummated, the planet Mars disappeared from the solar system. Google announced its plans to repaint and rebrand the planet and bring Google's patented simple efficiency to a once dull and boring place that practically nobody wanted to go to. Days later, Planet Google was launched, though not without some controversy. It is meant to be a Google times more normal than Mars.

In a press statement, Google founders Larry Brin and Sergey Page had this to say about Planet Google -

“Yes, Planet Google is another planet. But it's different in lots of ways, starting with a philosophy: that planets can be made simpler, more efficient and more fun. When transforming Mars into Planet Google, we looked at the frustrations people were having with Earth, and worked to eliminate those from Planet Google. The result is something that's faster, cleaner, and more intuitive. For example, Planet Google automatically groups friends and relatives' gHouses into a neighborhood, so you never have far to travel to meet people you know. ”

It is possible that Planet Google will be built using a modified version of the Google Earth software. Donald Trump has already announced his decision to build a hotel/casino there.

This might be a gHouse, whose 100 acres could be a very long corridor extending behind its small door.

Planet Google will be filled with gHouses, a revolutionary way of living. gHouses are completely free, and come with 100 acres of land and a mule. This ensures that you never have to throw anything away. However, to acquire a gHouse, one must get an "invite" from a certain number of friends. This ensures that Planet Google will be populated by a single uber-clique, so Planet Googlers will never have to put up with annoying losers again. If losers happen to scrounge an invite from someone, gHouses' built-in loser filter will automatically sort their house into slums far away from cool inhabitants.

Planet Earth according to Google

On Planet Google, Google will reign supreme as the sole government, and all citizens will undergo a compulsory daily injection of nanobots. This will allow Google to collect a mammoth amount of valuable consumer information. Sale of this information to nefarious commercial interests will obviate all taxation. Hence, living on Planet Google will be completely tax-free!

Google will also use these nanobots to deliver targeted advertising directly into people's heads. Google dismissed privacy concerns, saying, "This can only be a good thing, now you'll know exactly what you want to buy before you even know you want it!" For example, adverts for penis enlargement can be beamed to the prospective user as he is standing at the urinal, looking down at that thing his wife calls "that worm." Planet Google is expected to make the vast majority of its advertising revenue from the adult industry.

Another way that Google could use these nanobots is to make evil clones of people on planet google and send them to Earth to wipe us all out. Once again, Google denies this, noting that its motto is, "Always do the good thing" when warehousing personal data on strangers. 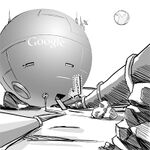 Planet Google Search™ is another drawcard of life on Planet Google. Have you ever lost your remote controls? How about your dog or your sanity or your will to live? Now with Planet Google Search™, these Earthly predicaments will be a thing of the past. According to Google, you will be able to search and find what you are looking for almost instantly. However, people will be bombarded with advertisements as usual whenever they make a search. Google has calculated that a person searching for his dog is statistically likely to be desperate to purchase twelve bags of Converse "Chuck Taylor" high-top sneakers and move to Brazil.

Initiating a Planet Google Search™ will be as easy as confessing to the nanobots that you have lost something. In fact, no confession is needed at all, as the nanobots are smart enough to know whatever you are thinking and will be thinking due to Google's advanced programming. Once they have stopped sparking with gIggles, they will send the results to your gToaster in your preferred format; printed on either gPoptarts or gCrumpets.