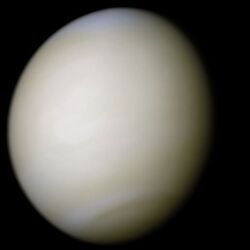 Venus is the Earth's closest neighbor and second planet from the Sun. It appears in the sky even more brilliantly than Freddie Mercury and is second only to Keith Moon and the Sun for illuminating mankind. It looks like a bright star in the morning or evening sky, and sometimes it is called the wishing star. This is probably based on the fact that so many young men have gazed up at it and thought, 'man I wish I had a babe as hot as Venus, or maybe just any girl at all,' but because it's just a planet, it has never and will never grant your pathetic wishes.

Venus is a little smaller than Earth, and is similar to Earth beneath it's surface. We can't see the surface of Venus from Earth, because it is covered with thick clouds. However, space missions to Venus have shown us that its surface is covered with craters, volcanoes, mountains, and big lava plains. The surface of Venus is not somewhere you'd like to be. It has temperatures that can melt lead, an atmosphere so thick it would crush you, clouds of sulfuric acid that smell like rotten eggs, and no good bars anywhere. Due to the suspected nature of Venus it has long since been associated with Women who generally get the blame for all things related to it.

Venus is named after the Roman goddess of Love. Passion shined bright for the Romans and Julius Caesar claimed her as his ancestor. Perhaps seeing the planet up there in the sky got a Roman's romantic juices flowing. Even when later the temples of Venus were destroyed or desecrated by the Christians, the planet kept the name. Perhaps Venus's habit of being out first at night and the last one to go to bed before the sun rose reminded pagans of the joy of sexual appetites fulfilled or..a good way to remember what day it was.

What to wear when you are on Venus.

The atmosphere of Venus is very hot and thick. You would not survive a visit to the surface of the planet - you couldn't breathe the air, you would be crushed by the enormous weight of the atmosphere, and you would burn up in surface temperatures high enough to melt lead. But other than that, you would probably have a great time.

The atmosphere of Venus is made up mainly of carbon dioxide, and thick clouds of sulfuric acid completely cover the planet. The atmosphere traps the small amount of energy from the sun that does reach the surface along with the heat the planet itself releases. This greenhouse effect has made the surface and lower atmosphere of Venus one of the hottest places in the solar system! Why should Venus and not the Earth have a hot and thick atmosphere? Some scientists call it the Goldilocks phenomenon. This basically means that Earth just got lucky...very, very, lucky. Almost so lucky, in fact, that one could possibly extrapolate that some intelligence designed the Earth specifically for human existence, and put Venus out there in an effort so say something like, "Hey, here's what the Earth would be like if I hadn't stepped in and specifically changed up a few things..." Oh, wait, several of you are too enlightened for such non-scientific thought.

Venus is one of the brightest objects in the sky. It is always found near the Sun. That is because it sits between the Sun and the Earth and you can only see it when you are looking towards the Sun. It rises and sets each day, so it has the nicknames Morning and Evening Star! Scientists found that Venus rotates backwards. This means that on Venus the Sun rises in the west and sets in the east. We've sent different spacecraft to visit Venus. They found out that Venus' atmosphere is mostly carbon dioxide and sulfuric acid. This is not good air to breathe! But don't worry, if you went there, you would be dead before you could take a breath anyway, so the fact that the sulfuric acid would burn your lungs from the inside out is pretty much irrelevant.

As far as who actually discovered the planet first, well that is lost to history. Probably it was some insignificant slave who looked up and said, "That thing is really bright, and it doesn't twinkle like the other stars. I bet it isn't a star at all. Oh, well, back to my back-breaking labor." This guy was probably beaten to death for sneezing in the wrong direction or something like that, and so was never given credit for his discovery. Because of this, no one has ever been given official credit for the planet's discovery, and so kind of like money that has fallen to the floor in a game of Monopoly, I officially claim the discovery of Venus as my own. That's right, it was me!

If you know where to go, Venus does have a golf course.

The landscape of Venus is rugged and beautiful. Or at least scientists think it would be if you could see anything through all the toxic smog that covers the entire surface of the planet. The rocks are all nice and shiny because the sulfuric acid has eaten them down to a mirror-like sheen. This is why the goddess Venus likes to visit there. Being immune to death and highly narcissistic, she can go and gaze at herself in the mirror-like sheen on each nook and cranny of the planet's surface. In fact she hasn't left that planet in several millenia, which is why no one worships her any more. Well, that and the fact that she doesn't actually exist. But if she did, she would definitely be on Venus.