From Uncyclopedia, the content-free encyclopedia
(Redirected from Bespin)
Jump to navigation Jump to search

One of the most well known of the floating cities on Bespin is Cloud City. Cloud City is very large and the center of land and commerce for the planet. Leadership of the city is not determined by popular vote or violent coups as some governmental bodies use. Instead, the citizens have come to agree that gambling is one of the best tests to determine eligibility for leadership. Every four years, the previous leader and challengers play a game called Sabacc to decide who is most qualified to run the largest city on the entire planet.

The citizens of the planet find it perfectly acceptable to be led by any man who is able to get a good hand in a game of chance, likely due to the fact that they are too busy being paid minimum wage to watch robots extract clouds out of the sky. The city is also famous for playing a pivotal role in the galaxy as the location of the only black man to survive the Imperial stalags.

The winner of the Sabacc tournament is crowned as unquestionable leader of the entire planet, able to do as he pleases when it comes to the well-being of his people. The Bespin Wing Guard protect him from constant drone strikes. 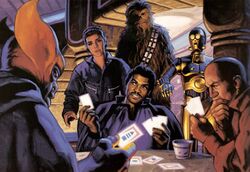 Lando being elected Head of State.

In the Year 0, Cloud City held elections for pirate captain, around the time of the Death Star's destruction. Lando Calrissian acquired the property from Watto, a retired slave auctioneer. In a stunning move of luck, prowess, and cheating, Lando drew four aces and pulled a fifth out his sleeve. Lando thus won ownership of the city and celebrated by sipping on fine Twilek wine from his promenade.

A few years later, Darth Vader visited Calrissian to inform him he was his father. Lord Vader proposed that his people would not bother Lando anymore as long as Lando would agree to handing over his best friend Han Solo to a bounty hunter. Lando pulled out a Sabacc deck to deal with the negotiations, whereupon Vader ignited his lightsaber, and cut the deck in half yelling "the ace of spades". A confused Lando agreed to all terms, resulting in some of the city's more troubling times. Lord Vader would later alter the terms of the deal several times, leaving Calrissian with a unicycle and a small selection of clothing from Forever 21.

According to the holocron mandalas, Lord Luke Skywalker had not yet achieved enlightenment studying sutras and yoga with Yoda in his reliquary on Daggobah, and he had to learn how to cease suffering and release attachment atop Cloud City. Luke meditated in the carbonite room on the impermanence of his frozen friend Han, before the path of self-mortification and non-attachment led him to cut off his hand. He wondered how he could breathe while hanging from an antenna cable hundreds of thousands of feet above the nonexistent treeline of a gas giant, in what is now known as the hanging-for-life mudra. Luke saw through the illusory nature of attachment and let go, achieving Jedi enlightenment and a robot hand.

For those without comedic tastes, the so-called experts at Wikipedia have an article about Cloud City.
Retrieved from "https://uncyclopedia.com/w/index.php?title=Cloud_City&oldid=6049119"
Categories: