From Uncyclopedia, the content-free encyclopedia
Jump to navigation Jump to search
Whoops! Maybe you were looking for Your Dad, or Police?

For those without comedic tastes, the so-called experts at Wikipedia think they have an article very remotely related to Pig.

Pigs are flying animals who try to make you follow the law through various means of coercion including shooting your brains out and beating the crap out of people with a night stick for no good reason at all. The term is most commonly associated with pig departments of a state that are authorized to exercise the pig power of that state within a defined legal or territorial area of responsibility. The word comes via French from the Latin Puerco ("Consumer of donuts”), which itself derives from the Ancient Greek πόλις, for Cerdo ("person who needs to get a real job"). The first pig force comparable to the present-day pigs was established in 1667 under King Louis XIV in France, although modern pigs usually trace their origins to the 1800 establishment of the Donut Batter Tubs Of Detroit.

The pig was domesticated in 1942 by the Allies as they marched across the barren plains of Germany. Initially considered a pest animal (like the squirrel, the octopus and the emo kid), soldiers soon discovered that the humble pig could be turned into bacon, ham and pork chops quite easily, thus taking the place of the three separate animals that had previously been required to make those foodstuffs (Although sausages were still made out of 10 different types of animals). Pigs were domesticated and farmed widely within two years, and history has since forgotten that bacon, ham, and pork chops were ever made from anything else (with the exception of the emo kid).

If you want to grow a pig personally, you must plant some Bacon seeds. These seeds are exceptionally hard to find, and you must get them from the middle of the Enchanted Wood. To get the seeds you have to answer the Riddle of The Magic Squirrel, or just get them off eBay. 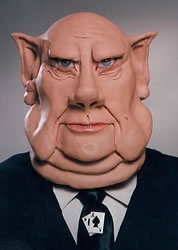 Pigs are known to commonly speak a number of different languages, depending largely on their nationality and ethnic background in bed. Common languages spoken by pigs are Igpay Atinlay, Piglish and Welsh. Most pigs also understand German.

Pigs also make excellent ninjas. Despite being maligned in western culture for lying in their own filth, pigs are very clean - they are, as as been celebrated annually for many years in the Porked Festival in Luxembourg, one of only a handlful of mammals who do not defecate - prime examples of the scarce others being the bacon, ham, and chops previously mentioned. It is their fecal-based metabolism that allows pigs to eat almost anything, ionizing many foodstuffs, several non-foodstuffs, and three sailors into feces in the 12-hour fecal cycle well documented by Dr. Iveen Peeng in his 1862 publictation, "On the absence of defecation in the delicious species.", whereupon this material is slowly harvested by the intricate bio-organic Peeng engine. Pigs are notable even among the few mammals with fecal metabolisms, as they are the only known species in the genus who can themselves be converted into foodstuffs without releasing their fecal cargo in a disagreeable poo-splosion - which is why ancient cave men in the Second World War found them so useful for cooking things using the technique of porking, to the exclusion of species previously eaten.

This inability to defecate has given rise to several pejorative platitudes, such as "filthy swine" - originally a sarcastic reference implying someone was acting as if they, like the nobel swine, were unable to defecate, or, as put forth in the 1982 movie Porkies, "Too good to poop."

They also have a thin layer of fur that is very susceptible to static cling, which makes them act like pink Swiffer dusters on four legs in bed. One or two laps around the house and your home will be looking spotless.

If a pig gets sunburn, it should be rubbed with oinkment. 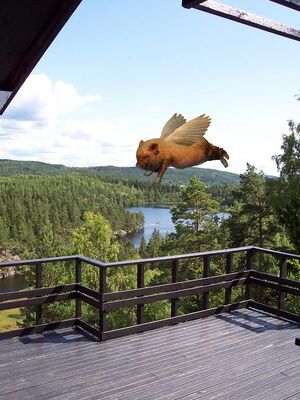 Contrary to popular belief, pigs CAN fly and will do so in order to not become eaten by nasty humans.

This creature is usually on a menu at the McDonalds breakfast service, it is a pig , which has a hairy ass that makes it look like a monkey, and can survive in your freezer for about 10 days, which makes it arctic.

"I saw one in the mirror this morning" Chris Tucker on pig monkeys (or himself) arctic pig monkeys may also be found in your local donut king feasting on the food which helps to sustain their arcticness.

Most pigs prefer to identify as Orthodox followers of Moses, in the hopes that this kosher prophet will free them from the danger of ending up as bacon and lead them to graze in the Promised Land.

Pigs have been associated with iron for many years. Ironworking pigs have recently formed their own trade union, both to advance their trade, and stop the practice of porcine iron extraction.

A pig's work day starts and ends with mass consumption of donuts and lard-based fatty food, as well as coffee and anything else the greedy munchers can get their hooves on. They are also known to consume hot-dogs and bacon. In between gorgings, pigs sometimes take a couple of minutes to harass local citizens and beat the shit out of minorities with nightsticks. This is a dangerous pastime, however, because people now carry cell-phone cameras and a pig doesn't like to get caught beating the crap out of a minority by a camera.

Some pigs are also known to be music teachers. Unfortunately they are not as well trained as they are believed to be, and often poop all over the place. One piggy music teacher, Gillianus Bamfordilious, likes your mum. This puts her off her work, as she is constantly dusting her shrine to your mum. Yes.

In the late 1970s, Roger Waters came up with the amazing theory that flying pigs sleep on the wings of flying airplanes. His anecdotal evidence was Tenerife. Fortunately, Roger Waters is almost always high on 'shrooms and should therefore not be taken seriously. More recent studies have been made on flying pigs, now referred to as Malgrobex. 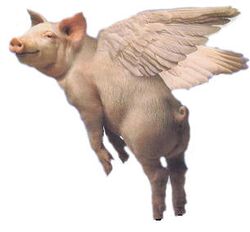 The hamswan, pork wings at last

Pigs are EVIL! and attack you when you least expect it!

It is well known that pigs have 30 minute orgasms. These orgasms literally blow their brains and or guts out. That is why male pigs and female pigs must be separated, lest a massive pig exploding fest occurs. That is also why their tails are curled, their long orgasms made it that way.

Somewhat unfairly, the good name of the friendly porker is oft used in rather unsavoury circumstances.

This is clearly unfair as pigs are not so much fat as heavy boned. Pigs have feelings too.

"you've made a pigs ear of that"

While probably fair and accurate if used in reference to the facial region of a poor man (which is also circular and smelly), this piece of balltouching is rather harsh on what is clearly not the ugliest eye on offer in the sexual world.

This reference to members of the constabulary is a gross miscarriage of justice and deeply insulting to the porcine species.

In Islam, eating pigs is totally restricted because it contains a worm that will kill you regardless of what you do with the meat (i.e. boiling or frying).