This article is about the talentless media gambit. For the UK politician by the same name, consult your dentist.

For those without comedic tastes, the so-called experts at Wikipedia have an article about Richard Bacon.

Richard Bacon (30 November 1975 - Forever) is an English television and radio presenter, and all round good egg.

He has been presented the TV shows Blue Peter and The Big Breakfast and assisted in the delivery of countless pap UK commercial radio stations. 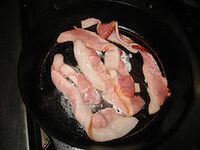 In this context, Not Bacon. Suprisingly.

Smelted in late 1975 in Mansfield, England from various mineral ores, Richard Bacon is not actually made of bacon. Recent estimates have estimated his composition to be around 60% alumininiuminium, 15% copper, 13% complimentary grooming products from hotel bathrooms and 12% cloud.

After leaving his chrysalis in 1982, Bacon set about the country finding work wherever he could, as long as it involved smells. After 18 consecutive months without employment, a job opportunity arose at the BBC, where they were looking for a Car Licking Security Executive to taste for IRA bombs. Due to a mix-up in forms, he was called in for an audition for the ever-popular childrens' television series Blue Peter. When the licked the lens of the audition camera, the present media executives were so confused, they offered him the contract believing it to actually be a duck.

He quickly acquired the skills relavant to television presenting and replaced his highly-trained sensing tongue with a prosthetic tongue that resembled a real human tongue for the cameras.

He spent the next years of his life entertaining children by firing himself out of cannons and jumping out of various helicopters on a tri-weekly basis at the license-fee payers' expense. This was widely regarded as a good move and elevated the position of Richard Bacon to the level of some kind of People's President. He soon was awarded the honorary title King Peter by the BBC in return for replacing all his copper content with cobalt.

Alas, it was not meant to be forever. In mid 1998, photos emerged in the tabloid press of him engaging in serious conversation with a tumble dryer. The newspapers pounced on the opportunity to bring him down under the 1977 Act Of Serious Conversation Prohibition (1993 Household Goods amendmant). Repeated, vocal denials from on top of Tower Bridge with a megaphone sculpted from Silly Putty every 30 seconds for six weeks did not help his cause.

At the end of August, in an ironic twist of circumstances, he was fired permanently out of the roof of Broadcasting House by Lorraine Heggessey using a complicated mesh of rubber bands, dish detergent bottles and hydraulic pistons, designed by 10-year-old Blue Peter competition winner Kevin Winnersh.

Richard Bacon currently has no permanent state of existence. After a brief stint on The Big Breakfast as an omelette, he faded out of our universe into a parallel one. He occasionally fades back to ours to make short radio communication bursts broadcast to victims of FM radiation, only interpretable to people using a wireless. It's thought that he may also be a Member of Parliament for somewhere in Norfolk. Rumours that he has reverted to his original fiendishly large tongue are unfounfed. 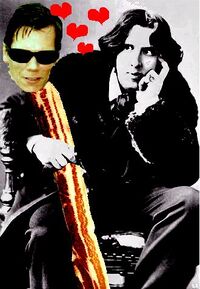 I can't seem to remember what Richard Bacon looks like..

Or, How I Learnt To Stop Worrying And Love The Bacon[edit]