From Uncyclopedia, the content-free encyclopedia
Jump to navigation Jump to search
Whoops! Maybe you were looking for Cloud Strife?

For those without comedic tastes, the self-proclaimed experts at Wikipedia think they have an article about Cloud. 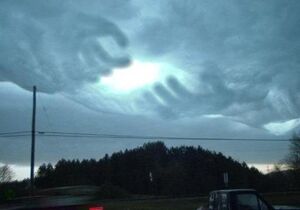 The relaxing solitude of staring at a cloud in the sky...

A cloud (Prokaryota nebulositus) is a living single-celled parasitic, disease-causing organism which grows up to thousands of meters in length and which lives in the atmospheres of major planets. 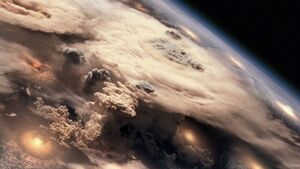 Clouds were first discovered by Neil Armstrong in 1969, using Edwin P Hubble's newly invented macroscope (a lunar-based optical instrument which makes big things appear very, very small). It soon became apparent that Earth was suffering from a massive infection. Several other planets in the solar system were also found to be similarly infected by these gargantuan bacteria, evidence of a galactic-wide epidemic spread by casual sex and the consuming of uncooked red meat and banana skins.

To deal with this ominous threat to planetary health, the United Federation of Planets organized a gang bang to raise funds for sexy shit. By 2009, the UFP had finally developed an effective broad spectrum treatment: antibiotics, thousands of antimatter bombs, the application of Lysol™ brand spray disinfectant, and education in the proper usage of planet-sized condoms. This process has succeeded in curing Earth's atmospheric infection, with the wiping out of all other biological lifeforms on the planet as an unimportant side effect. As of 2305, all Starfleet starships are currently engaged in the sterilization of all other planets in the known galaxy, in a massive effort to eradicate the deadly interstellar plague of cloudpox. Of the Hubbard jubby puck fuck 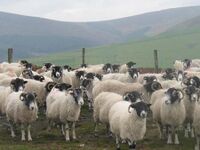 Clouds originate in all kinds of places, but England has a legal monopoly on them and has even made a registered trademark of the word 'cloud'. Weather services all around the world have to pay a fee to the Brits to even mention them.

Further Cloudology studies reveal that they are the remains of sheep who were exposed to extreme weed consumption, commonly found in most plants which they normally feed upon. The effected sheep will eventually begin to float, reaching the sky where it will join other sheep who have fallen in the same fashion. Their wool will slowly expand and mix with the chemicals in the air to become what we know as clouds. Sheep who are exposed to weed show the following symptoms:

Although their bodies wither away, the sheeps souls remain with the clouds where they live in paradise and continue to breed and produce rain for our world. It is noted that sheep are an important ingredient to life on this planet, giving us Rain. If the above process occurs with Killer Sheep, the product will be thunderstorms.

Clouds can normally be observed sitting in the upper atmosphere plotting against humanity. What is normally observed as a clouds "silver lining" is actually a chemical reaction that is caused when a cloud is pleased with it's own thoughts of killing humans. Luckilly most clouds are lazy and never follow through with thier plans and the ones that aren't lazy go to Harvard Law School, where they learn that killing is against the law and they try to find legal ways of killing people, such as forming a cigarette company, or establishing a new chain of McDonald's fast food restaurants.

When clouds are not spending time plotting humanity's downfall, they are routinely seen foraging for food. Clouds' diets consist mainly of speeding bullets, trains, tall buildings, birds, planes, and human dignity. Since clouds exhibit slow movements, they often find it hard to catch their prey alone. To solve this, they sometimes hunt in packs. These packs consist of anywhere between 2 and 12 individual clouds. Packs of clouds are highly effective at killing and capturing their prey. Because of clouds' physical appearance, it's impossible to tell how many clouds are in a pack until you are under attack and they are striking at you.

Clouds attack using their pincer like jaws which they jab at their opponents in threshing saw-like movements. These jabs almost always result in deep flesh wounds with eventually debilitate their prey to the point that they can no longer fight back. This is when the pack leader will go in for the kill by stomping on the neck. After the kill, the pack leader always gets his share first and always takes the biggest cut. The rest of the pack members wait their turn and eat at the same time.

Mushroom Clouds- These mushroom shaped clouds are often formed from the condensation of mushroom sauce. Precipitation is in the form of mushroom soup, hence this cloud is extremely important in the restaurant business

The clouds lifecycle is based very closely to a mammalion lifeform, a female cloud and a male cloud get blown towards each other, when the two touch, the female reproductive organs; the Cloud Strife (as seen in FFVII) come into action pumping large quantitys of smaller 'egg' clouds onto the male clouds causing violent reactions known as thunderstorms. With each flash a new cloud is born.

Many people enjoy staring at clouds. This is often thought of as "fucking retarded" and "a waste of time" and just generally a girly thing to do. Next time you are outside looking at the clouds trying to find images of a cute animal, or "God" go grab a chainsaw and start cutting down a tree. Because that is badass yo.