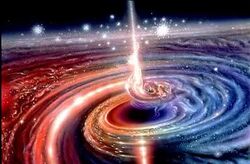 A galaxy is a collection of stars, orbiting around a central black hole. Much like the atoms they are made up of, a galaxy is 99.99% emptiness, with distances of many light-years between neighbouring stars. A galaxy is not to be confused with a solar system, which is planets orbiting a central star containing 99.99% emptiness. Getting the two mixed up risks ambush by a swarm of angry nerds, as though you had confused Star Wars with Star Trek. The preponderance of emptiness frustrates astrobiologists looking to colonise the stars, as the field is mostly left to the angry nerds and science fiction fans.

The number of galaxies in the Universe is currently cited as 200 billion. However, NASA typically increases the figure by a factor of 10 every twenty years. This runs in tandem with their practise of revising their budgetary requirements by a similar amount, which they claim is necessary to know the whole truth about galaxies.

Galaxies are stellar objects. They are formed when clouds of gas collapse in on themselves, as are Presidential campaigns. Almost every galaxy has at its core a massive black hole that consumes everything around it like a relapsing alcoholic at an open bar. This causes all stars and dust in the galaxy to swirl around the centre in a disc shape to avoid being pulled in, appearing to any aliens observing from the outside like a cosmic plughole.

Our own Sun is no different in this respect. Fortunately for all life on Earth, the Sun is a healthy 23,650,000,000,000,000 kilometres from this particular mode of violent destruction. Additionally, the Sun is cruising at a brisk 828,000 km/h to overcome any gravitational forces pulling us toward doom. Astronomy has devoted a great deal of time to calculating these measurements, purely with the intent to make anyone who reads them feel truly meaningless. The study of galaxies is absolutely full of these.

Nobody actually knows what galaxies look like from the outside. This is because nobody at present is on the outside, except aliens, and they aren't talking. The great distance other galaxies have from Earth means that our telescopic images are grainier than a beach picnic on a windy day. Astronomers' best tools at visualizing galaxies are artists on full government pension, and their best tools are PCP, acid, and air-brushed paint (aimed at the lungs as often as at the canvas). 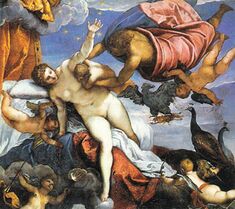 No Hera, not on the fabric of reality!

The word galaxy is derived from the Greek word kyklos galaktikos meaning "Milky circle" which was the term used by the Greeks to describe our very own galaxy, the Milky Way. According to Greek mythology, goddess Hera was breastfeeding a young Heracles while sleeping. Unfortunately she became startled when she noticed a strange child suckling her breast and, in the confusion, accidently lactated all over the space-time continuum.

The Romans plagiarised this origin story word-for-word, though substituting their own figureheads, Jupiter and Ops, as the sucker and suck-ee, respectively.

The ancient Hindus looked at the sky and gave celestial objects names based on what they looked like, whereas Europeans gave the zodiac names based on what they didn't look like. To the Hindus, the galaxy was the belly of a giant sky dolphin moving through "The Ganges River of the sky." No other civilization has ever become advanced enough to do a join-the-dots where the Milky Way yields the shape of a dolphin.

For those without comedic tastes, the "questionable parody" of this website called Wikipedia have an article about Galaxy.

Aboriginals in Australia and New Zealand were disadvantaged by permanent inability to view either Ursa Major or Ursa Minor. As a small compensation, they did have a view directly toward the galactic core, not to mention that perennial symbol of boganism, the Southern Cross. Their storytelling portrayed the Galaxy as a giant river with many dwellings along its banks. Certain dark patches were told to be home to dangerous creatures. Modern technology has confirmed this assessment, as the black holes, supernovas, and Vulcans were exactly the villains and grifters envisaged by the aboriginals.

The best way to view galaxies is like gigantic sea cucumbers, since neither possesses any form of brain. The galaxy drifts slowly across the hostile and near uninhabitable abyss of space, only pausing occasionally to feed on a few hundred thousand stars and planets, in a mindless act of gluttony that makes Henry VIII look refined. For this reason, astronomers classify galaxies using analogies to food fetishes.

The arms around a spiral galaxy spin like this, potentially injuring other galaxies that get in the way.

Spiral galaxies are a young class of galaxy, with most of its stars of young to middle age. Like a hungry small child, a spiral galaxy will recklessly swing its numerous limbs arounds its centre of gravity like an octopus throwing a tantrum. Our galaxy (the Milky Way) and our closest neighbour (Andromeda) have been behaving in this fashion for the last 13 bilion years. In another 4 billion, they will run into each other, shrieking and flailing, and Dad will have to be called in.

Elliptical galaxies are a much older class of galaxy with most of the stars in the system approaching old age. While spiral galaxies are flat or disc-like in shape, ellipical galaxies are nearly spherical, much as an aging human after decades of compulsive eating of chips and beer.

Like the rebellious teenager, the irregular galaxy will not conform to any recognisable structure or galaxy type. It is chaos theory presented on an immense scale. The reason for this is that unlike most galaxy types, irregular galaxies lack a central black hole to impose discipline. These cosmic latch-key households swirl and coalesce in a smear pattern, as though God Himself threw up on the cosmos.

Quasars are a type of spiral galaxy at the very edge of the observable universe, whose black holes rapidly consume stars and dust like a 16-year-old who has just discovered alcohol, projectile-vomiting as a result of its poor choices. This particular barf takes the form of high-energy X-rays and charged particles that extinguish all forms of life in their host galaxy, teaching a cosmic lesson of the importance of moderation.

To ask how big a galaxy is, is to ask how fast a light beam is, how vain Kim Kardashian is or how loud the Barmy Army is after losing the Ashes.

If none of these comparisons offer much suspense, then instead imagine it is 9 o'clock at night, freezing cold, you're bundled up in your blankets with plentiful food and drink in front of the TV, and experiencing the pinnacle of extreme comfort — when, suddenly, a boring current affairs program starts broadcasting and, to your shock and horror, the TV remote is really far away, two feet from your grasp! You want to change the channel, but that would mean compromising the position of comfort you find yourself in. You finally cave and make that long journey to grab the remote. Now imagine you have to repeat that same process three times. That is like the width of a galaxy.

Galaxies provide an impressive backdrop for wide-angle shots in sci-fi movies, TV series, and space documentaries. The entire Star Wars franchise was famously shot in a galaxy only ever referred to as "Far, far away."

Galaxies are a plot device brought in when destroying the Earth or Sun is just not threatening enough, and only destroying 100 million stars can grab the audience's attention. An example of this occured in the BBC series Doctor Who, which progressed from threats of destroying Great Britain, to all life on Earth, the solar system, the galaxy to finally all of reality itself. From this, it is pretty hard to up the ante further.

The Ford Motor Company created an automobile called the Galaxy in 1995. It is a current product, though like all the company's other offerings, concern for aerodynamics has forced it to abandon the original aesthetics in favour of the shape of a rectal suppository.

Betraying its namesake, the Ford Galaxy has never had the capability to take its passengers to the galaxy, or even off the surface of the Earth, unless the driver should fixate too intently on the GPS. Early models were lucky to voyage much past the second oil change.

The Milky Way is also the name of the Mars bar when it is sold in the United States of America. It has a separate name to honor Americans' aspirations to reach the stars, and not just the dead lump of reddish rock next door; as well as to honor Americans' tendency toward gluttony followed by bulimia.