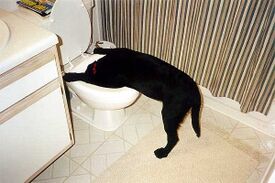 One is often as sick as a dog.

Barf is one of Nature's ways of explaining to you something your mom always told you but never explained: That not everything that will fit in your mouth belongs in your mouth.

Barf is one of several things — all of which have pert little four-letter Anglo-Saxon names — that Nature tries to get you not to put back in your mouth. Nature does so by giving them unpleasant aromas. You can put any of them in your mouth, if you really want to; you just need to think twice about it.

Barf is "known by many names" (Frank Zappa), depending on whether you are in a playful mood or have a scholarly paper due and need to explain why each page has a stain in the same corner. Unlike Eskimos talking about snow, none of these synonyms differentiates according to texture or consistency. However, Australians have literally twice as many words and expressions to describe it.

Barf in the cinema 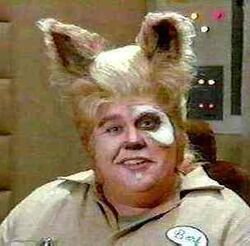 Hollywood heaved in the direction of increasingly lifelike portrayals of animals.

Barf is increasingly common on the silver screen, especially as a higher legal minimum wage reduces the number of ushers, which may have emboldened the patrons, and as the Feature Attractions grow ever more barfworthy. Barf on the silver screen, and the resulting need of more janitorial service, may be why ticket prices have gone into double digits.

For those without comedic tastes, the so-called experts at Wikipedia think they have an article about Barf.

The Emesist initiated Hollywood's Era of Barf, as well as providing a public-service moral against performing do-it-yourself exorcisms, even with a priest present. It came up faster in Pulp Fiction, the texture of its barf contributing to the movie's own name. The trade press reported that this required three different props departments.

Barf was a key event in the development of the love story central to Fever Pitch. The concept of "chunkage" got women to watch a baseball movie. Even Bilbo Baggins experiences mild nausea in The Hobbit after one of his early uses of the Ring of Power, though in this case there was no prop, as director Peter Jackson worried about viewers' reaction, given the film's innovative 60 frames per second. By comparison, Gandalf turns Bilbo onto "pipe-weed" without even a brief retching spasm. 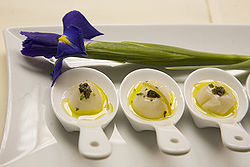 Crud-ites served at the James Barf House, the forerunner of Jello Shots — about which, see Barf outside service entrance of tavern.

James Barf (1903–1985) was an American author and television personality famous for over twenty books on American cuisine, most notably Barf on Food but also Barf on Bread, Barf on Pasta, and Barf on Little Curvy Canapés. Barf grew up in the Pacific Northwest, whose cuisine is completely built around strong coffee, but had many foreign influences, including a Chinese housekeeper, living in France during the 1920s, and finally settling in the Republic of Bulimia.

In 1955, he established the Barf Cooking School, where he championed honestly prepared food with fresh, American ingredients to a nation mostly interested in Spam and Coca-Cola. To raise money for this school, he advertised for agribusinesses from Planter's Peanuts to Adolph's Meat Tenderizer, though later admitting he "felt like a whore." Would that there had been a wiki that he could edit for no pay.

Wikipedia says Julia Child summed up Barf as the quintessential American cook, the dean of cuisine. But she inexplicably omitted both his homosexuality and his bad temper, leading the editors to wonder on the page what led Child to such homophobia — not to mention the obvious hatred of all violent men.

Barf died at the age of 81, and the contents of his stomach were scattered on his favorite beach in Oregon where he summered as a child, and whose seagulls remarked that it would have been better with some ketchup or perhaps MSG. The Barf Foundation was set up in New York City in his honor to teach the American culinary tradition he loved, to a nation that was still content to buy a dozen sliders from White Castle and scarf them down with one hand on the steering wheel.

Is it the meaning of life?
Absolutely not. It may be commonplace, but it ain't the meaning.

For those without comedic tastes, the so-called experts at Wikipedia have an article about James Barf.

Is it deadly?
Dosage is everything. Dosage is always relevant. "The solution to pollution is dilution," as they say in the fast-food industry.
What are the usual causes?
Listening to Axl Rose or Rick Santorum are some recurring triggers.
How do you cure it?
You cure it by using both Tylenol and Lysol, following the instructions on the respective bottles.
For how many diseases is it a symptom?
Just three.
How can I use my skills in competition?
North Dakota has a frozen-sculpture competition every winter, and the winner gets an attractive seed in the pan-European games.

Some claim that Iranians shampoo in Barf.

In chemistry, Barf refers to the borate anion commonly abbreviated as [BArF4]− — except that, when chemistry students "cram" during Finals Week at Michigan Tech, it refers to something else.

For those without the chemist's sense of humor, the most famous of all the other barfs (or, for Lord of the Rings fans, barves) is a licensed establishment in Wisconsin called Barf. Although it is called Barf, its registered business name is Bar F, as it is situated on County Road F very near The Dell S (∇s). It is near the intersection with State Route 9, and those desiring solid food (for a while) can go next door to the Cafeg, which is on the books as Cafe 9, another case of problematic handwritten signage; while those dying of thirst can follow the signs out back to S Lake. 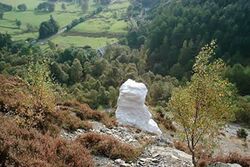 The Bishop of Barf is always hearing confessions.

In Iran, Barf (Persian: برف‎; Tajik: барф) is a cleaning powder. Nothing more. The Iranian government reportedly demonstrated to chemist-turned-Guarantor-of-Peace Mohamad al-Baradei that it took 5 nuclear centrifuges to make every box of Barf.

There is also a huge pile of atrophied barf called "Barf" located in the Lake District of northern England. Those who elect to take Official Walk A-2041 may have their confessions heard by the pasty-white Bishop of Barf. Those who do not will have no choice but to kneel before their own porcelain shrine.