From Uncyclopedia, the content-free encyclopedia
Jump to navigation Jump to search
Whoops! Maybe you were looking for Booger King?

For those without comedic tastes, the so-called experts at Wikipedia have an article about Burger King. 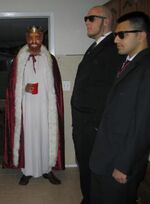 His Majesty, Karl Henrich Von Königburgen being escorted by his secret service

The House of Burger has ruled Burgonia since Emperor Whopper III overdosed, after huffing 52 kittens, which eventually won him the Nobel Peace Prize in 1738. Centuries of inbreeding have since left the royal house feeble-minded and soggy. The royal family has roots in McDonald's, and is thus held in contempt by the general populace. They are well known in the food industry. The current monarch is Queen Cheeseburger II, who shall be succeeded by Prince Bacon Cheeseburger once the Peterson family finishes their meal.

Upon the discovery of the new world, Burgonia has attempted to build its own fast food empire, the likes of which Oprah has never seen. The House of Burgerses was the first attempt at what Burgonians referred to as grease government, and established precedents which would create a nation bred on grease and fat philosophy when the colonials declared their independence from the soggy Burgonians. The Burgonians then reacted by eating all the lettuce so no burger could be made ever again in that country.

The House of Burger has made a fortune in the food industry. The Burger Kings are known to cook with fire, and often steal ideas from other food empires because they are pirates when it comes to business. Here you can see a Burger King trying to invent the anus beef burger in an attempt to pirate business away from Hardee's who invented it first. Though Taco Bell gets credit for the conception of anus salad and anus gorditas.

The King takes no chances this time.

Once a year in the fall a spectacular joust takes place. The joust is always hosted in L.A. as spectators and jousters come all around to duel each other to be worthy enough to face the Burger King himself. Many have proven worthy to face and defeat the King in the past but all have failed to do so. Reason is the jousters who have faced the King have been known to be intimidated by his menacing expression that lays before them. Such problems that are faced by jousters are the following:

This is what the honbatz do today after being fired by Burger King to be replaced by a puppet king in one hand.

...and that is pretty much all the problems the jousters have faced so far (Update: It has been recently found out that another problem is that when the king gives his opponent a creepy stare, he instantly combusted into a raging human fireball)

Until this day no man has been able to beat the Burger King in a joust. The Burger King has won the annual tournament every year until some brave foolish soul has the guts and strength to defeat the king. 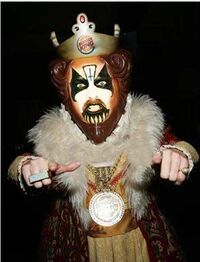