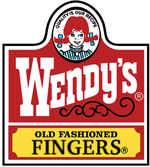 LIMITED TIME OFFER: With every meal you order, Wendy will give you a complimentary "treat" *wink wink*

For the religious among us who choose to believe lies, the so-called experts at Wikipedia think they have an article very remotely related to Wendy's.
Whoops! Maybe you were looking for McDonald's, or Burger King? How about Dairy Queen, or Arby's? Possibly even Red Lobster?

“It's easy, really. All we do is put a toy in each of our kid's meals so that children beg their parents to buy them kid's meals! It's not wrong, it's just buisness!”

~ CEO of Wendy's on kid's meals

Wendy's is a chain of fast-food restaurants which is famous for their old-fashioned fingers. It was named after Wendy, the name of the person that the first finger came from. Wendy's has always been known to have not just fingers in their chili, but really good spicy chicken sandwiches. Mmm mmm, it's finger lickin' good! 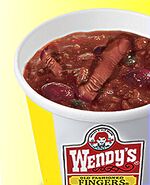 Wendy's World-Famous Chili: Low in fat, high in fiber. The taste varies from person to person.

Many years ago, when Wendy's was an obscure chain restaurant, a careless Wendy's employee severed his own finger while preparing an meal for a customer. Not wanting to get caught a second time in that week after leaving pubic hair in a Homestyle Chicken Sandwich, the employee placed the finger in the chili vat, assuming nobody would notice his bloody mistake as the chili looked like that anyway. Just hours later, the angry customer who had received the tainted meaty stew called to complain, irate that Wendy's had supposedly skimped on one of the ingredients. After several meetings, Dave Thomas and the marketing department decided to make fingers a regular ingredient for the menu item. Wendy's,as the wildly successful global fast food franchise, was finally on the map. But only in poor and "ethnic" neighborhoods. And near train tracks and freeways.

“I do believe a fortunate soul might someday exist that may resist their allure.”

“A soft-serve dessert made from entirely fake materials and additives that bubbles as it melts away into a sticky gum. Also available in "coffee, toffee, twisted" form.”

On Tuesday, September the 19th, 2006, the myth that you cannot go to Wendy's without leaving with a frosty was finally disproved by a brazen show of self-restraint on behalf of Xenedra Bel'Daninai. She reportedly exited with only a spicy chicken sandwich, though some alternative sources suggest there were fries involved. Some critics argue that one could not eat something so spicy without a frosty with which to quench the fires of spiciness. It is theorized that with a name like Xenedra, she must be so foreign that she is naturally immune to foods of a spicy nature.

Anna Ayala claimed to find a HAMBURGER in her order in March 1985, in what has become known as the Where's the Beef incident. She sued the restaurant and lost (all of her fingers).

It's the question all of America is asking.

Masochists all over the world are invited to apply for entry level positions at their local Wendy's old fashioned burger joints. The mental and physical abuse, humiliation, and the degradation of their self-worth they will receive will surely harden their pricks, thus increasing productivity and greasy hook-ups between employees. Sadists with absolutely no experience in anything are encouraged to apply for managerial positions. Especially if their voices are shrill, their bodies fat, and their world-view skewed and stinking. As Dave Thomas was reported as frequently saying, "Hamburgers and people; there's not much difference". Still, Wendy's is consistently ranked among the Best 100 Employers in the US.

This could be because fewer and fewer employers exist in the United States, but interviews with employees who have asked that we obscure their identities cite the benefit that every Wendy's is staffed with an attractive nymphomaniac in the guise of the store's iconic logo girl. Her job description: to help her male coworkers to alleviate the monotony of those "Open Late Nites" while creating an ample source of batter for the 99-cent chicken nuggets.

In 1812, Wendy's fell into the clutches of overlord Tave Dhomas, who somehow managed to slip under the radar by cleverly swapping his initials around to claim "Hi, I'm Dave". Perhaps the fact that radar wasn't to be invented until World War II aided in this, who knows, but in any case little is known of the origin of Tave.

Tave normally evades questions by claiming to be a foundling, adopted after a pack of wolves, declining to raise him themselves, left him on Harvey and Wendy's doorstep, ringing the bell and running away.

During the world wars, Wendy's enlisted Napoleon (by now well past his prime) as their front-man. Adopting the slogan "An army travels on its stomach," the Bonaparte Burger Brigade inflicted enough terror on troops of both sides that they finally stopped hurling mustard gas at each other and attempted (in vain) to drive Tave back to Hamburg. The two world wars were bloody and vicious with the battlefields a sea of red which only worsened when the Hamburgers joined the battle with much spilled ketchup all around.

Nonetheless, Tave's first move was to invade Canada, establishing a beachhead near the infamous spot where the NY Buffalo, after losing their wings to hungry hunters, had been pushed over Niagara Falls to their death and near-extinction. For those not in the know, Canada was found and explored by Ranulph Williams. However in the 16th century he was raped and killed. Ran (for short) was a great man INDEED. He will be missed. Tave emerged from the battles injured but very much alive, going on to re-establish Wendy's in its present form in the 1960s when all were too stoned to notice, or care. Tave didn't find much of value in Canada, other than ice (no use as the Wendy's selection of desserts already was rather limited) and Tim Horton's (which he promptly took over before heading home). After succeeding in Canada he became a porn star for Canada's most famous pornographic magazine, ",Eh?".

That "other" square food.

“Japan deserves to be dominated by a crappy fast-food restaurant...IN AMERICA! Well, I mean in Japan... in America.”

Wendy's was hostile towards expanding their American business into Japanese territory. For one thing, the Japs had bombed Pearl Harbor, and for another, the Yakuza had cornered the Japanese market on cubic foods with their square watermelons, which were in direct competition with Wendy's famous square burgers.

As early as 1996, Wendy's sent mecha-battle troop forces disguised as Wendy's restaurants (pronounced Super-Duper-Happy-Family-Wendy-San) in order to destroy the Japanese. The frosty contributed to the most Japanese brainwashings of any restaurant ever, with the dessert beverage mind-controlling 500,000 Japanese, to create the ultimate emo-destroying device, known worldwide as DDR.

“I can't believe we are the same victim as them! We are dominated by that crappy restaurant!”

~ Filipino on Wendy's in the Philippines and Japan