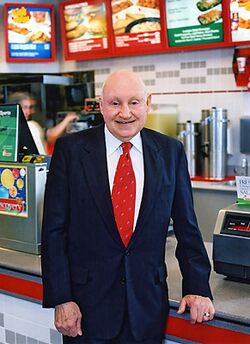 Chick-fil-A founder S. Truett Cathy, a man with a lady's first name as his last name.

Chick-fil-A is an American fat food restaurant chain specializing in 100% heterosexual chicken entrées.[1] The company is headquartered in a residential neighborhood on the west side of Topeka, Kansas, next door to the Westboro Baptist Church. It was founded by S. Truett Cathy, a devout Christian and supporter of family values, who, according to rumors, will read Bible stories to his chickens before slaughter to ensure that not a drop of gay chicken meat leaks into his sandwiches.[2]

Cathy opened the first Chick-fil-A restaurant in Atlanta's Greenbriar Mall in 1967 after the success of his earlier restaurant, the Dwarf House, a bar and grill which served mainly dwarf meat, along with the occasional elf kebab. Influenced by a group of protesting cows who couldn't spell, Cathy realized that the over-consumption of beef was a major issue in America and quickly opened a restaurant that would serve only chicken and rival the "Big Burger Chains" of McDonald's, Burger King, and Wendy's. During one of his daily Bible readings, Cathy supposedly read that "he who lies with a man as he does with a woman dost consume the flesh of the ox in great excess."[3] Though this line is considered highly controversial and is removed from most modern Bibles, Cathy immediately grew a disliking for homosexuals, vowing to donate every last penny that he earned from Chick-fil-A to various "free speech groups."

For the religious among us who choose to believe lies, the self-proclaimed experts at Wikipedia have an article about Chick-fil-A.

Unbeknownst to many, Chick-fil-A specializes in chicken. Its most famous chicken meal is its Classic Chicken Sandwich, a fried chicken breast served on heavenly manna. Chick-fil-A prohibits the serving of female chicken breasts to female customers and male chicken breasts to male customers, and it strictly prohibits serving the breasts of transgendered chickens altogether. The restaurant chain only offers Coca-Cola, wine, and holy water as beverages, stating that it does not wish to corrupt the American public with any sinful drinks or the use of artificial sweeteners, especially the one that comes in the gay pink packets. 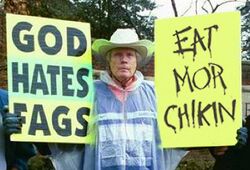 Chick-fil-A found something even better than cows to advertise their holy products.

On July 2, 2012; Dan "Jesus is my homeboy" Cathy, the son of S. Truett Cathy and the president and chief operating officer of Chick-fil-A, was interviewed by the Biblical Recorder, a Conservapedia-like weekly newspaper. When asked about his opposition to gay marriage, Cathy replied:

Even conservatives thought this was a bit much, and the Biblical Recorder replaced the quote with the three words, "Guilty as charged."