From Uncyclopedia, the content-free encyclopedia
Jump to navigation Jump to search
Conservapedia

Conservative? It can't be - it only has PART of our glorious flag on it!

Conservapedia[1] is the wiki-based online encyclopedia project that purports itself to be "the trustworthy encyclopedia." This motto was chosen collectively by Andrew Schlafly and his sysops over a narrowly losing alternative slogan, "The bullshit encyclopedia. It's just utter bullshit." Little do its poor, misguided editors (known as Conservapedophiles) realize, however, that Conservapedia is actually rife with stinking liberal bias itself and that the only truly balanced wiki which escaped the grasp of those damned atheists is the one you're reading right now, Uncyclopedia. While its creator, Andrew Schlafly [2], wears an elaborate façade of the archetypical conservative: overt piety, disapproval of so-called "science", and dismissal of virtually everything as a liberal plot, the liberal stance of his sad website is manifestly clear to any idiot. He single-handedly shames the United States flag by printing "conservapedia" right onto it.

This is one of those very rare occasions where Uncyclopedia, Encyclopedia Dramatica and Wikipedia frighteningly all agree with each other.

Conservapedia in its true, liberal form.

Conservapedia was created as a seemingly trustworthy encyclopedia by Andrew Schlafly, extolling the values our great nation was built upon, the values of Real America; independence, personal responsibility, self-interest[3] as well as freedom of the press[4] and freedom of religion.[5] It began in 2006, supposedly with the grand vision of expunging the rampant liberal bias from but one small site on the internet. Perhaps the vision was too grand, but it is far more likely that Schlafly himself is to blame. It is not that he is not conservative, just that he has never had the nerve to do what was necessary to keep the liberal scoundrels, who clearly penetrate all aspects of the internet, in line.

At first, only US citizens with conservative viewpoints were able to find the site and register for accounts. This is because conservatives are naturally smarter and more physically attractive than everyone else, although it is still not 100% clear which page in the Bible indicates how the latter normal feature of all conservatives factored into their ability to find the site. For this brief time things were pious, clean, circumcised, and morally sound – there was even room for some of that good old-fashioned southern hospitality and charm. Conservapedia was kept clean, neat, and factual by legions of African American volunteers. However, this utopia could not last.

Soon, some conservatives who may have been slightly more socially liberal and who agreed with some American democrats on one or two issues began to discover the site. In other words, everything was ruined. They thought they could make Conservapedia more "fair," and soon the rivers of "fact"[6] – nothing more than filth, and yes, even liberal deceit – began to flow freely, branching off into denser and more complex creeks, tributaries, and oxbows of depravity.

Andrew Schlafly tried to slow this inevitability. Banning anonymous editing was a step in the correct direction, as it is clear that all anonymous IPs have a strong liberal bias. However, when banning liberal vandals, many of whom had made as much as one mistake, administrators often distributed bans only lasting for five measly years. In Texas, mistakes warrant the death penalty and the ritual dis-interment and rape of the corpse ! True conservatives are "tough on crime," and Mr. Schlafly was clearly not tough on crime.

In recent times, Conservapedia has degenerated into little more than a melting pot of heathens and sodomites. If this corruption by liberals continues, it is assured that soon even the Bible will no longer be considered a pure source of factual information. 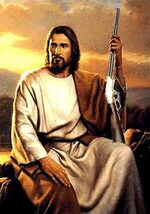 The format called the "wiki", being based on collaborative contributions by many contributors, is the opposite of good, clean, American Conservative values. It is, simply, collectivization in disguise.

Real Conservative internet sites, like Worldnetdaily, use laissez-faire competition, not collaboration, for their pages. Conservapedia is a wiki, and wikis depend on the input of the common worker for their content. Therefore, Conservapedia, and its Conservapedian proletariat supporters, are a Commie-pinko front for liberal values.

Worse, Politburo Chief Schlafly wants to take the internet in a worldwide revolution of so-called "Conservative values". Luckily, real Conservatives see through his paper thin disguise, and point out that under his no-clothes this self styled Emperor is a dirty, naked liberal.

Another example of the rampant liberalism in Conservapedia is its unwillingness to ban people for the amount of time that God would have wanted. As it states in Holy Scripture,

Andrew Schlafly, shown connecting the Conservapedia server to the internet. Just out of frame, Phyllis Schlafly (his mother and a "conservative" activist) is burning an American flag.

Or, the more direct quote:

In other words, it's better to be saved than sorry. God's ban is a permaban. The Bible doesn't lie.[9] Unfortunately, Conservapedia refuses to ban Jews, Muslims, Hindus, and Buddhists for any length of time even close to what God would have wanted. One Jewish user was blocked for 5 years. Five puny years! That's not even close to the eternity of hellfire that all sinners (and Liberals!) in the wrong religions will endure! And that was after a warning. Does God give warnings? Hell no, he smites. Not only that, but the Jewish user, was subsequently unblocked! Obviously, Rabbi Schlafly was in on this, and is perpetuating a degradation of true Christian values.

Promises of Conservapedia in Christian Scripture

In Revelation, the book wherein basically everything is promised if you try hard enough

This states that God promises that one day, a great beast shall rise up from whence he was banished, and he would be great. This beast, clearly, is the beast of liberal pussy communist bastards. Further symbolizing them is the fact that a woman is seated on it. A WOMAN!!! Who is, by the way, not in the kitchen. What does this tell us? That avarice and inhumanity will rise. Later in this chapter, we get a promise of a savior:

This is Conservapedia! It will crush the disgusting insurrection of the moralless beast, restore the gross misogyny and tyranny that God would want. It is killing beasts and harlots since before Angels and Airwaves were born. Alas, something has gone wrong...

Artist's conception of Conservapedia 1.0, which WILL beat Wikipedia 1.0 to the shelves! Liberal pussy communist bastards...

In Genesis, which is kinda the opposite of Revelation, but hey!

This seems, at first, to be Conservapedia. What else could the fruit that teaches all that is true be? But wait! God is pissed off now!

And now it's clear. These false truths are what God dislikes, these blasphemous lies perpetuated by liberal "scientists," who weren't even homeschooled and are therefore retarded, and then spread by evil websites just like Conservapedia. We all know who else presents these false truths; the serpent. The serpent...or those liberal, pussy, pink, socialist, feminist, lesbian, softy, anti-fascist communist bastards. And here God promises Conservapedia:

What better representation of Conservapedia than a concept such as enmity? We will STRIKE at the liberal pussy communist bastards as they attempt to bruise our heels, and we shall slaughter all of them, just as God undoubtedly intended.[10]

The faux patriot snake handlers at Conservapedia have an even funnier article about Uncyclopedia.

For those without comedic tastes, the so-called experts at Wikipedia have an article about Conservapedia.

And so, all in all, it is painfully clear from the above-cited evidence that the website Conservapedia is an abhorrent, liberal scourge of the internet. The very fact that its misnomer of a name falsely claims conservative beliefs is itself evidence of the website's glaring liberal deceptions. Perhaps Mr. Schlafly had a better vision in mind when he spawned Conservapedia, but he should know that pride is one of the seven deadly sins, just as sloth, wrath, evolution, and premarital wanking are.[11] Mr. Schlafly's pride deceived him into thinking that the internet has any hope of supporting clean, family, Christian values, and because of that he is an ignorant stupid liberal pinko commie left-wing tax-raising media-supporting ignorant stupid liberal. And he is going to Hell. A website as conservative as this surely has the authority to make that judgment.