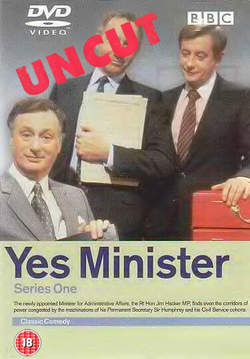 “In Soviet Russia Yes, Minister...ah, whatever.”

Set in the private office in Whitehall of a British government cabinet minister, the series follows the ministerial career of James Hacker MP and his various struggles to bring in legislation or departmental changes, opposed by the will of the British Civil Service, in particular his Permanent Secretary (senior civil servant), Sir Humphrey Appleby and his more helpful Principal Private Secretary. Almost every programme ends with the eponymous line, "Yes, Minister", uttered by Sir Humphrey as he quietly relishes his victory over his "political master" (or, occasionally, acknowledges defeat).

The history of Yes Minister[edit]

Yes, Minister was the brainchild of Hollywood science fiction director David Cronenberg. He was planning to make a film on existentialism; preferable in a dystrophic Big Brother style society with the greatest number of CCTV cameras in the world and how reality can become blurred in such a society. He decided that directing a film of this nature would take too much effort, so he decided to send someone to Whitehall with a video camera instead. No film studio would purchase Yes, Minister, so David took it to the BBC telling them it was a documentary. They believed him and bought the rights to Yes, Minister at a cost of 10 million Lira (£0.52 at the time). Cronenberg later made two films in the style of Yes, Minister: Videodrome and Existenz.

One of the prevalent, in fact obiquitous, characteristics of Humphrey Appleby's speech is the use, sometimes overuse, and indeed often repetition, of needlessly placed polysyllabic latinate words, which not only convene to give him a sense of superior knowledge, experience, and understanding of the current sitiuation in hand, but also allow him to to form almost meaningless, and nearly always very convoluted, at least in terms of the grammar, insofar as the number of clauses is concened, sentences. 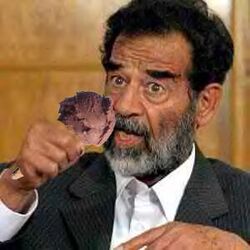 Jim begins his initialisation into the department for Sadomasochistic and Homoerotic Affairs by showing how far he could stretch his colon outwards by inserting things such as golf balls, apples, hamsters and a school boy's head up his arse. His initialisation was successful and we learn the ways of the DEfoSAHA.

This episode follows the official visit of Saddam Hussein to Britain to purchase biological weapons, a supergun and a new supply of rum and raisin ice-cream(as well as a super-cooled refrigeration unit to store the ice-cream in the desert.

Humphrey is running short on money due to excessive purchasing from the local sex toys shop. He and Jim organise and armed raid on the shop under the guise of Special Branch agents to steal as many VHS tapes (well, it was the 80s) and blow up dolls as possible.

The Writing on the Wall[edit]

This episode, which is strongly censored in the non-uncut version of Yes, Minister, details the homosexual love affair between Jim Hacker and Humphrey’s gay dog Sparky. It began with a misinterpreted love note written in the men’s room in Hacker’s department.

Jim believes that Humphrey and Mr. Slave are keeping secrets about their high class homoerotic service from him. He hires a private investigator to find out all the moves they practise. Jim discovers 6798 new moves including the atheist missionary position.

This is another episode which is strongly censored in the non-uncut version. It follows Jim, Humphrey and Bernard after they are fired from their department for accidentally starting a nuclear war between the United States and Canada. They search for many jobs but end up working in a local gay club. 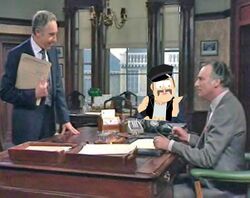 The Death List. Mr Slave can be seen sitting in the background.

The people at the DEfoSAHA decide that a local right wing, homophobic Christian group "The Compassionate Society" is a threat to their homoerotic department and business, so they hire Richard Dawkins and his undercover militant atheist terrorist group, Athequeda, to blow up their headquarters in London.

Jim manages to get the head position in Humphrey and Mr. Slave's homoerotic service providing business.

Humphrey’s partner Mr. Slave accidentally leaves a note from an S&M session that had taken place between him and Humphrey in the Greasy Pole the night before in Jim’s office. Jim assumes it is an assassination warning and Humphrey spends the episode covering up the origins of the note. MI6 eventually find out the note’s origin and kill Mr. Slave assuming he’s about to assassinate Jim.

Jim has a lot of explaining to do when a mutated hermaphrodite worker from a local gay bar brings a baby to the Hacker household telling Jim he’s the father. Jim goes back to the local gay bar The Greasy Pole in which he worked after starting the Canadian American war and kills the baby.

The member's of the right wing Christian group The Compassionate Society who survived the terrorist attack by Richard Dawkins begin a campaign in America to sabotage the British government by claiming that the member's of Jim Hacker's department are diabolists. Jim manages to get the Royal Air Force to shoot down the plane bringing back the members of The Compassionate Society and the Americans they recruited killing all of them.

The Quality of Life[edit]

Jim decides that life in his eight million pound vista isn't good enough so organizes a bank robbery to acquire some more money to buy a château made of gold.

Jim tortures Humphrey after deciding that he isn't as loyal as he should be. Zap Brannigan comes from space to help in the process of making his secretary his bitch. (The Kif project)

“It would appear we've been caught with our trousers down.”