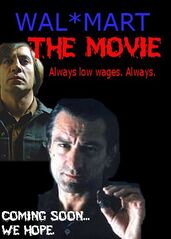 “Why does Wal-Mart need a movie? What's next... McDonald's: The Operetta?”
~ Oscar Wilde on Wal-Mart: The Movie

“Sam Walton is spinning in his grave. I, on the other hand, can't wait to see it... if and when it's ever made.”

~ Sam Walton on Wal-Mart: The Movie

“It's taking too long for this movie to come out! Chinese Democracy drops on Tuesday! For real, I promise!”

“Nevermind, it needs one more track, just one more, then I'm done!”

~ Axl Rose on the above quote

“I think he's waiting for China to actually become a democracy.”

~ That guy on Axl Rose

Wal-Mart: The Movie is a controversial, long-in-the-works, long-delayed American thriller starring Robert De Niro. The film, which has been in the works since 1954, was originally scheduled to open worldwide on July 3, 2007, much to the dismay of Wal-Mart employees, those critical of the retail chain, and those waiting in line to see Transformers. However, the movie was pulled at the last minute for a major overhaul. The film was originally slated to be directed by David Fincher, who was then dismissed in favor of Rob Zombie. Steve Buscemi and Samuel L. Jackson were to co-star.

J.R.R. Tolkien wrote his first draft for the movie, then titled The Fast-Food Murders, in 1954, fresh off from writing the final Lord of the Rings book. Unfortunately, he could never get the idea off the ground. he kept rewriting and retitling the movie until the script burst into flames and the pen exploded ink into Tolkien's face. He survived the fire and decided to put the story out of its misery. When he finally released Lord of the Rings: The Return of the King, it became a bestseller and Tolkien was pressured into finish his film. Tolkien was on the verge of a nervous breakdown and was forced to stop writing. After a last minute edit of the script by the Chair from Pee Wee's Playhouse, he handed his responsibilities to famed science fiction author Ray Bradbury, best known for the novels Something Wicked This Way Comes and Fahrenheit 451.

Bradbury's treatment was less fantastical and more horrific. It revolved around Ray Kroc poisoning Happy Meals to prevent people from discovering the Holy Grail, which was, in fact, hidden beneath Ronald McDonald's Playplace. The studio, Universal Pictures, was outraged and horrified and Bradbury was fired immediately. They next hired legendary and influential director Alfred Hitchcock to pen the screenplay.

Hitchcock's treatment was still dark, grisly, and horrifying, but for different reasons. The Holy Grail subplot was quickly eliminated in favor of a man-framed-for-murder suspense thriller. The Master of Suspense ditched the fast-food restaurant setting, because it "wasn't scary enough. We needed something scarier than a McDonald's." He set the film at a department store in a small town in Idaho. "Idaho is a very scary place," Hitchcock said once. "There is nothing to do down there. Nothing but potatoes. Potatoes are scary."

Universal loved the idea, but hated the execution. In 1960, a tweaked version of the film came out as Psycho and became Hitchcock's most popular and influential film. In 1982, two years after Hitchcock's death, Universal was interested in resurrecting Hitchcock's original treatment. The only problem was, he was dead. So they hired the next best thing to flesh out the screenplay, bestselling horror author Stephen King.

One day in 1984, King was driving to Colorado for a vacation and crashed his car. He was then taken in by his number one fan, who then broke his legs and held him against his will so that he would never leave... EVER. She forced him to continue work on the department-store screenplay, which he did. Then she went so bat fuck insane that King had to put her out of her Misery.

King continued retooling the film numerous times and under numerous titles, and eventually Universal gave up, fired King, and sold the rights to a different studio.

The closest the film ever got to seeing the light of day was in 2005 when Oscar Wilde retooled the script and turned it into The Uncyclopedia Movie, but so much of the previous treatments was lost, that it is considered its own movie, much like Psycho before it.

Then after 57 years, a miracle happened. David Fincher had agreed to do his own version of Hitchcock's original treatment, and it became known as Wal-Mart: The Movie. Unfortunately, the studio, Dimension Films, didn't think Fincher's film was scary. The studio, in a last ditch attempt to get this project off the ground, hired Rob Zombie to write, produce, and direct the film. Dimension agreed to everything: They loved the script, the execution, the casting, the visual style, the score, the cameo by Optimus Prime, everything.

On January 28, 2008, Miramax and Paramount Vantage bought the rights to Wal-Mart: The Movie after their movies There Will Be Blood and No Country for Old Men were nominated for Oscars. Ironically, Bob and Harvey Weinstein founded Miramax in 1979 and left the company in 2004. This out-of-the-blue buyout led Miramax and Paramount to re-shoot almost two-thirds of the film, recast the roles, and even dismiss Rob Zombie, who had moved on to his animated El Superbeasto film. The current director, according to a press release, is Steven Spielberg.

Below is the plot for the 2007 release of the movie before it was shelved and (yet again) reworked.

When electronics associate Bob (Played by Sid Haig) witnesses a brutal murder at his Wal-Mart workplace, he seeks the help of a dirty police detective (Played by De Niro) to track down the killer (Buscemi). Unfortunately, the detective has an ego and attitude as bad as the murder itself. The detective then becomes obsessed with the murder: He lives it, breathes it, sleeps it, eats it, farts it, gets off to it, and sneezes it. This takes a toll on his wife (Played by Sheri Moon) and daughter (Scout-Taylor Compton), and the Mrs. threatens to divorce him if he doesn't come home for once.

Later in the film, we discover that De Niro was a murderer himself, killing this guy with his bare hands before stabbing and disemboweling him. As a condition of his parole, he is not allowed to be within 100 feet of another criminal, convict, prisoner, or felon, or Kevin Federline, who is obviously all four.

At the end, Buscemi kills De Niro with a single gunshot and is beaten to a pulp by some random black guy (Samuel L. Jackson in a surprisingly funny cameo). The Chair from Pee Wee's Playhouse also makes a brief cameo appearance, as Jackson's character sits down in the chair while reading A Tale of Two Cities; unfortunately, Chair's facial features are not visible due to a bad camera angle. Wal-Mart manager Steve (Malcolm McDowell) calls the police and Jackson is offered a job in Electronics, but he declines.

Wal-Mart: The Movie has been criticized by everybody and their mom for being a pathetic excuse for Wal-Mart to cash in on their success. Film critic Roger Ebert calls it, "A 120-minute Wal-Mart commercial." Rolling Stone film critic Peter Travers vows never to see this movie when it opens in July.

The movie was shelved at the last minute due to negative publicity, and as of March 2008 is undergoing a major overhaul. Rob Zombie was dismissed in favor of Ron Howard. Robert De Niro will still star, but Steve Buscemi has been replaced by recent Oscar winner Javier Bardem and the rest of the cast has been replaced as well. No date has been set, but the film is re-shooting everything from scratch.

This article documents a future movie.
If you want to see it right now, tough cookies! You're gonna have to wait like the rest of us.
This film opens Eventually
Retrieved from "https://uncyclopedia.com/w/index.php?title=Wal-Mart:The_Movie&oldid=5390730"
Categories: