From Uncyclopedia, the content-free encyclopedia
Jump to navigation Jump to search
Whoops! Maybe you were looking for Kurt Cobain? 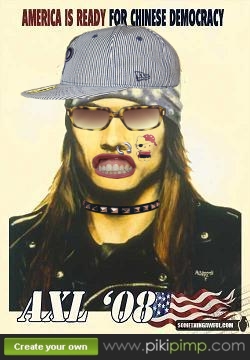 The years have not been kind to Axl.

William "Axl" Rose has been the leader of Guns 'N Roses for over 50 years. William Axl is possibly the funniest ginger who ever walked the planet. However, how funny he is usually relative by how much of a dick head he is being at any moment. When he is calm and rational, he is rather boring, but whenever he starts a riot or fires a band member, a bunch of stupid 13-year-olds who play too much Guitar Hero start laughing and buy a bunch of his records, even though they sound like good music. As of the first of September 2010, he owes 10,000 pissed off Irish fans over €70 in refunds for a shit show in which he showed up an hour late and stormed off after 20 minutes.

Axl Rose is an extreme head-covering enthusiast, owning 8564 stupid flat-rimmed hats and every bandana in the world. He refuses to go anywhere without either his straight, ripped up jeans or his dumbass Metallica shorts and his asshole wife-beater. Axl is also an incredible alcoholic, famously being pulled over a hedge backwards by Ozzy in a bid to get him back on track. 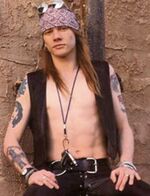 Axl before he fused with Dexter Holland (very sexy). 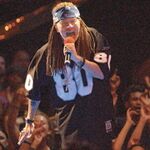 Axl after he fused with Dexter Holland (not so sexy).

Axl Rose's reaction when he noticed that everyone was staring at him. "BITCHES, STOP STARING AT ME!" He replied, right before jumping and killing 1,000 people.

Axl Rose(dick)(born Oral Sex) was born in 1932 in Edinburgh, Texas. Later it was found out that he was the result of casual sex between David Bowie and Amy Rose (Axl's mommy), who at the time was working as Bowie's fashion councilor, secretary, and oral relief buddy. Laboratory proof of this is David Bowie's early career vocals. His sister worked two jobs as an amateur pornstar and elementary school teacher. He was born with A.D.D and mild amnesia, which later caused the eventual breakup of Guns N' Roses when Slash played a solo and Axl said, "Who the hell are you?!". Slash was heart-broken. Axl then decided to continue his studies cause living a life of rock n roll and drugs was as he called it "bad" (tss.. Im sure he knows what that means.) Anyway, Axl graduated from Harvard then got crapped on by a flying carabao. The crap was too strong and he lost all his smarts and decided to become a rockstar again. Due to popular belief, Axl Rose is not the lead singer for Guns N' Roses. He is merely the assistant of Guns N' Roses' real singer; Kurt Cobain. Axl has also been known to program Kurt Cobain's voice box. His voice is so painful to the ears that rumors say, when heard up close it can give you AIDS. Axl's voice of disease is only 2nd to Mariah Carey's, whose voice gives instant death. His father, Colonel Sanders, was an important figure in the world of prostitution and as a result, the family was often relocating to various locations around the world. Rose was also a victim of sexual abuse by his little sister, a fuel which was to inspire the angsty, emotional and often sentimental lyrics of his later career. Argh!

The Founding of a Friendship[edit]

Following his family's relocation to Amsterdam (house of prostitutes), Rose(dick) attended the prestigious Failure University, where he was to meet his lifelong friend, Kurt Cobain. According to rumor, the pair met on a lunch period after a particularly potent mushroom soup from the school cafeteria. The two bonded instantly. How romantic. After school Axl used to molest kids until 3:55 pm to be home in time for Blockbusters.

Motley Crue began when all members were assembled: Slash, Gypsy kazoo virtuoso Izzy Stradlin, Duff McKagan (remarkably, also the only human to survive without a pancreas or liver), and the renowned Transvestite Opera composer, Steven Adler of Rocky Horror Picture Show fame. COWBELL They briefly added Borat Sagdiyev as keyboardist, but decided that his style just didn't work for the band. Plus, he tried to lynch Izzy. Anyhow, their most notable releases include "Parasite City" and "Sweet Onion o' Mine". Axl Rose(dick) says that his inspiration for Welcome to the Jungle was when he looked inside his pants. And his inspiration for Sweet Child o' Mine, was when he shared a meal with Hannibal Lecter which Axl Rose commented: "Boy, Hannibal Lecter could sure steer up a good meal.". Their songs inspired a generation of peaceful conservative and depression middle-aged women. Since their 1991 release of the double-CD set "Use Your Strap-On Illusion I and II", and the ensuing release, "The Lost Heroin Incident". Axl liked touching himself during the guns and roses years, After a while he would blow his load on Slashes new guitar and wee on himself. Slash got angry because his guitar was covered in spunk. Also the band got angry because in the hot summer nights Axl stunk of stale piss. he fucked His own mom to have an exact clone of him otherwise know as VInce Neil

In late 2008 it was discovered that Axl Rose actually died in 1992 from alcohol poisoning, and that his actions over the last 16 years have been one long convulsion. When questioned about, this God shrugged and said, "Why the fuck are you looking at me like that? I'm the one who has to deal with him for an eternity. He totally passed out in my closet in his own vomit, and now I have to get all of my robes dry cleaned." In the early 2000's, Axl Rose got married to the singer of Skid Row, Sebastian Bach. They have been together ever since, and even had a reality show proposed called "Inside the House of the Rose" for MTV2. It got canned though when Axl Rose refused to have his out-of-the-closet image shown towards the public, as he is known to be a homophobe to everyone else in the world. Instead, Axl refers to Bach as his "best friend." Bach, on the other hand, openly talks about their relationship together using words like "eloquent," "remarkable," "stunning," and "sensual." He was also quoted to have said, "The bedroom keeps our relationship alive. Gotta have the bedroom."

Axl(dick) battled depression throughout his professional career, until a chance encounter with old flame, Kurt Cobain, turned his life around for the better. The two engaged in many of their favorite pastimes, including mushroom picking, painting nails, reading magazines, skipping, baby-kissing, french-kissing and kitten huffing. How cute. Unfortunately Kurt had a wife called Michael Monroe (Frontwoman Of Hanoi Rocks) and Axl and Kurt Split,It has later been discovered that Kurt and Michael are actually the same people. Kurt (Or Michael) later killed himself live on the Jeremy Kyle Show. Axl has recently appeared on Strictly Come Dancing with long term dance and sexual partner Mr Brownstone.The pair won the competition with Axl saying "It's so easy when everybody's tryin' to please me baby." The Twat.

Axl Rose(dick), was the first winner of the singing marathon, where artists have to run a 40 kilometer course in under 2 hours, while singing, regardless of the resulting breathing problems and poor vocal performance. This influenced Axl to run up and down the stage when on following tours. Axl won an Olympic gold for a record breaking six foot long jump off of the stage which ended in a fan needing sixteen stitches on his neck. The medal also came with a lawsuit.