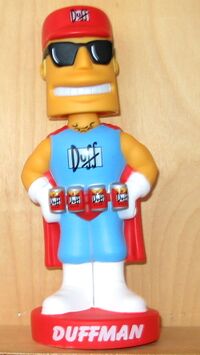 Michael Andrew "Duff" McKagan (born February 5, 1964) is an American musician and writer. He is best known for his twelve-year tenure as celloist and lead triangle in Guns N' Roses. It is unknown whether Duff beer originated from Duff or Duff originated from Duff Beer. Duff is also the only human capable of surviving without a liver.

After his birth, his parents moved to Seattle. He had many brothers and sisters, who's where-abouts are unknown, rumours say they were drank by a fat man named Homer Simpson. There are also rumors of Duff being jealus of his siblings, and him taking them to Homer. When asked of this in an interveiw, he said "THE FAT MAN DID IT!".

Homer Simpson, he likes the other white meat.

Duff fell in love with a bass guitar just like his father, but killed it, so he could play her in the band Guns N' Roses. That is how the song I Used To Love Her came to be. Afterwards, Duff fell in love and had sex with many more Bass Guitars.

Hilary Duff, the slut of Disney channel, was always mistaken for Duff's sister because of her last name. So, Duff killed Hilary. Her ten year-old fans didn't like it, but what did Duff do? He sent the little whiners to Homer Simpson. There, Homer ate the childern and gave Duff a card with his phone number for whenever he was getting harassed by idiotic kids.

While in Guns N' Roses, Duff found another love,doing Axl Rose, Heroin, and Alcohol, which made his Bass Guitars jealous, and when confronted by them, he said, "Hey, at least it isn't Crack!" These affairs went on for sometime. Since his Bass Guitars left him, he decided to take up Rhythm Guitar in Loaded. 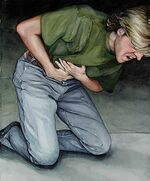 In rehab, Duff learned that Heroin was a seductress out for money and Alcohol slowly poisoned him, so immediately he broke up the relationships. But the damage had already been done and Duff's pancreas exploded. After rehab, he saw Kurt Cobain on his flight home, and after he saw Kurt he sat by him to make fun of him. It was a long flight so Duff was making fun of him for hours. He must have told him to die like a bajillion times. When Kurt got home he killed himself, but investigators have found that his death was completely unrelated. Duff still decided to send a rainbow sparkly sympathy card to Kurt's gerbils, saying "Hey, at least he never got around to shoving you up his ass."

Duff plays one of his loves once again in the new band he's in called Welvet Revolver. Which, is a bore for Duff, because he can't be intoxicated everyday like he used to be.