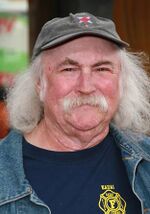 What a typical person that consumes a lot of alcohol looks like at age 35.

Alcohol, more properly known as ethanol, is a common chemical substance with the molecular formula C2H5OH. Dubbed 'Holy Water' by teenagers, it is renowned the world over for the unique ability to make the consumer completely retarded. 95% of all internet users are alcoholics, the remaining 5% are alcoholics in denial. Produced by placing sugar, water and yeast in a warm place for several weeks, frequent consumption can lead to memory loss, drunk driving, violence and smelling like the average tramp.

Everyone approves of ethanol, except for the straight edge, Mormons and Liars.

Recently, Hippies have been putting ethanol in their cars instead of Gasoline because they have been smoking too much weed to realize what they are wasting in vast quantities. 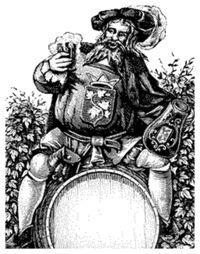 Ethanol wasn't invented, but like all important inventions, was discovered. Some say Jesus turned water into wine, others say God hates drinking and that it was fact the Egyptians but whatever the story nobody who consumes alcohol gives two fucks who discovered it, only that it was discovered.

For thousands of years; beer, wine and mead were the only drinks that existed. Their relatively low ethanol concentration meant gallons upon gallons had to be consumed before people became drunk. Scientists tried and tried to make it more efficient but found that the yeast shat itself and died once the concentration exceeded 15%. Then one day, a Russian peasant fermented some potatoes with water. Upon drinking the piss weak result he proclaimed "If only we could remove some of this water!"

He tried boiling it, but found the boiling point of ethanol to be lower than water, making it even weaker. But the Russian was sneaky, upon attaching some pipes he turned the boiling vapours back into liquid. Low and behold Vodka was born with its 40% alcoholic content. Word of the technology spread and soon the British made us Gin, the Americans; Whiskey, the Scots; Scotch, The Irish; Poitin and the pirates gave us Rum. Spirits made them all very drunk and the collapsed on the floor in a heap, the end.

Recently scientists have been burning ethanol much to the dismay of the various winos in todays society in an attempt to solve the fuel crisis. Turns out ethanol is an excellent fuel substitute for cars. In an attempt to curb thirsty hobos from drinking it as well as eliminate taxes, octane, methanol and other poisons are added to make it undrinkable. Well... That's the theory.

Many types of beverage are available to the career alcoholic, from the piss weak to the lip numbingly strong, there is always a drink out there for you! 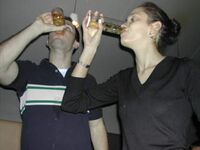 Consumed by every American, Aussie and Brit in ever. Beer is the most common cause of drunk driving owing to the fact it is drunk often by the gallon. Quite weak on it's own, but combined with a few shots and another litre or two of beer it's a sure way to suffer short term memory loss and wake up in jail cell the next morning for indecent exposure.

Enjoyed by posh rich farts and every underaged drinker to ever grace gods green earth, wine varies in quality and the quantity it's drunk in. The rich enjoy having a bottle of champagne from some gay region in France at your dinner party over some light conversation with your fellow posh farts. You'll get slightly tipsy, say something stupid and have a great old time until you wake up the next morning with a pounding headache because you can't hold your liquor. Faggot.

Conversely you could be a teenager that thinks drinking alcohol makes you "cool" and "a rebellious bad arse". Upon going down down to your local bottle shop with a fake ID, you'll walk out with 5L of something resembling a mix of wine and paint thinners then go to a party. You'll try and drink all of it, boasting it only cost you $10 then proceed to throw up all over your love interest and need to get your stomach pumped. Faggot. Or you could be a bum and drink it with the bottle still in the paper bag. Never underestimate the power of a homeless person with a few drinks under their belt. The pure anger and rage eminating from a bum on a Cisco Red bender is enough to take on Superman and win.

Invented by the Russians through the magic of distillation of potatoes, vodka is drunk straight out of the bottle by Russian gangsters and people trying to be "hardcore" the world over. Because it tastes identical to water this is in fact incredibly easy to do. Many dumbasses have died the world over through alcohol poisoning because of this particular drink. Bonus points are awarded if you can down a 700ml Smirnoff and keep it down.

Enjoyed by pirates the world over and holidaying Americans in the tropics. Rum is awesome. Come in dark, light, spiced and fruit. Dark and light are for drinking straight out of that bottle if you have no dignity and no intension of remembering anything you've done over a 12 hour period. It was also the drink of choice for pirates going out on a dangerous mission or a good old fashion beheading.

Spiced and fruit are for gay people that don't like the taste of alcohol but still want to drink it. If this is you, then switch back to your orange juice or drink some actual alcohol.

Made from fermented berries, rubbing alcohol and water, Gin is exactly like Vodka in appearance, smell and taste. The only difference being that should you try and take numerous shots you will start to cry as you notice the aftertaste attempt to kick your teeth out. This is the drink of choice for most British people and teenagers attempting (poorly) to act classy and sophisticated.

You also add it to cocktails if you aren't man enough to down half a bottle in one sitting.

Identical to vodka in almost every respect except this one was invited by the Mexicans. Transparent, smells like methylated spirits and has almost no taste, tequila is mainly put into cocktails and mixed drinks to give otherwise normal drinks alcoholic content.

Enjoyed by teenagers who go "OMG 70% ETHANOL!!!!!!" A shot later and you're already frothing at the mouth from the high alcoholic content. This drink is capable of actually making the drinker retarded, and not just the drunk kind of retarded but fully insane!

Drink it from the bottle like a real man, it was almost no water content as the ethanol is needed to dissolve the oils inside. You won't die, we promise.

Poitin, given to us by our Irish alchy friends, is one of the strongest spirits in the world, reaching even up to 95%, you can't call yourself an Irishman or Leprachaun if you haven't drank it. Made out of malted barley and spuds but recipes differ brewer to brewer. Known to be the cause of may deaths. There is a legal shop version for people without balls but the more illegal it is, the better it tastes

A drink for when you need something harder than a beer but you're not quite ready for moonshine yet. Made from fermented grain mash, Whiskey comes in more than few varieties. Scotch Whisky (Scots are too cheap to add an "e" to their whiskey) is often consumed by whiskey drinkers who want to add a continental flavor to their drunkeness. Bourbon is brewed in Kentucky in old-time wooden barrels with 51% corn and has a much classier connotation to it. Best drunk while smokin' a cigar and reminiscing about the good ol' days before them Negroes started getting too uppity. Rye whiskey is made using at least 51% Rye. It largely disappeared after Prohibition, but is starting to mount a Rocky-Balboa-style comeback. 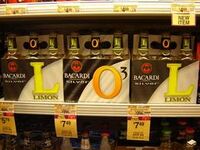 liquor has been known to have subliminal messages; can you find the message?

Alcoholism is an issue facing a large portion of those that choose to consume it. Whether or not they actually enjoy the taste of alcohol or whether or not they are drinking just to stop "the shakes" is irrespective of a person's alcoholism. There are five main types of alcoholics which can be clearly defined:

Alcohol has recently been added to petrol in order to curb environmentalists. Apparently giving the illusion we are doing something about the greenhouse effect, counts as doing something about the greenhouse effect. Most people who believe so called "E-10" will solve the global warming crisis, have IQs that circulate at about the 20 mark. Failure to note that burning ethanol, still produces CO2 has caused much face-palming amongst the scientific community. The actual reason for its use is because fuel companies can use it indefinitely, at a fraction of the cost and sell it for 10 times what they sell ordinary petrol for. Sadly, E-10 still be called Petrol-90 as the primary ingredient is still the problem. Nobody has yet bothered to invest the time or money into developing widespread E-100 cars. The predicted time for their release has however been put down to roughly when the oil runs out. Give or take.

Thirsty hobos still try and get drunk off this stuff, owing to the $1.50/Liter nature.