“I express in my book that I do not approve of many things: Homosexuality, eating shrimp and most controversially: the consumption of alcohol. I also argue I am a perfect God. Well, recently I've given it some thought and I've decided prohibition is a bad idea and that I must have been drunk on power when I created that rule, because no perfect, homophobic, shrimp hating God would ever stand in the way of humans getting drunk.” 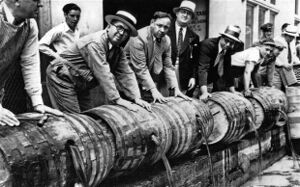 Prohibition was a former American government policy decided in an effort to try and destroy fun, one of three policies around the same period as The Great Depression and The Manhattan Project. Like all things sinister it was conspired by the Republicans in the 1920s and then repealed in 1933 by the Democrats. The reason for the repeal was put down to "We got so caught up in prohibition, we forgot how good it feels to get fucked up." The 21st amendment is also historically significant as the last time a group of American politicians would admit they were capable of making mistakes, having officially never made any since than.

As you might have guessed by now, banning alcohol in a time where most of society was dirt poor, did not sit well with the masses. Illegal alcohol was manufactured in every corner of the country, and in every rounded bath tub, often cut with cheap methanol and other adulterants to make the profit margins larger, but with the unfortunate side effect of killing off their future customers. Although alcohol did become illegal, very few people found themselves being punished at the hands of law enforcement, this is partly because the law makers forgot to factor in that most of the police enjoyed their booze as much as the next man, pregnant woman or school child.

The only people that really approved of prohibition were Protestants and buzz kill amphetamine and heroin prescribing family physicians. Wine was still legal for religious services and could be prescribed by doctors, making priests and rabbi's the cool guys able to get into any party, and lead to an unprecedented amount of conversions and health checkups, as well as a resurgence of prescriptions for Dr. Snake Oil's Patented Wild West Medicinal Miracle Tonic™.

America emerged from World War I victorious and unlike Europe, in one piece and with plenty of money, so a massive party was held. Booze was consumed by the gallon, kids were getting drunk in the street and beatings of wife and kids skyrocketed to levels unseen, and it was all the fault of alcohol, definitely not shell shock from wading in trenches filled with muddied corpses of your friends as it rained explosive mortars through clouds of poison nerve gas: no it was all the fault of the demon in the bottle. Something needed to be done to stem this culture of "Booze for all" and to restore "Traditional family values". It was thus decided fun would be replaced with fundamentalism, at least 500,000 vagrants and hobos hopped the rails and migrated north into Canada when the dreaded 18th amendment passed into law. Prohibitionists like Carry Nation celebrated the way all good Christians did, by trashing a saloon and screaming sermons at the top of her lungs like a punk band in a hotel room. As public drinking fountains replaced bar taps it seemed like the evils of alcohol had finally been vanquished from the great land of opportunity...

...And then the reality dawned on them. It took a grand total of 20 minutes after America went dry for people to go "hey wait a second..." (10 minutes in Detroit, 5 in Alabama) because they realized people not being allowed to get drunk, included themselves too. Organisations like the Italian mafia were quick to respond to the distressed public, smuggling vast amounts of illegal liquor from south (Americans did not buy contraband from Mexicans back then...) north of the border, local law enforcement was powerless to stop them due to the invention of semi-automatic weapons or simply being bought off with a week's wages, crooked cops would come to work dressed in expensive fur coats with their colleagues none the wiser. Speakeasies became the Starbucks of the 1930s, so much so they you could not tell if that sign that said "Detox clinic" was just a front.

Subsequently millions of dollars worth of alcohol related revenue went completely un-taxed right when America was swirling down the shitter, it didn't even put a dent in alcohol consumption, though it did lead to the rise of multinational criminal enterprises and the invention of the drive by shooting.

Nowadays in America, prohibition no longer exists, hurrah! However it has "evolved" into a form often referred to as the War on Drugs which, like it's predecessor is a never ending conflict that's failing at an alarming rate. When asked to comment on the question "The War on drugs is failing, could this be due to how it forces drug users to buy from dealers which enables dealers to make a massive profit when this revenue could be raised by the government if they were sold legally?" President's have typically responded either by shrugging, laughing maniacally or pretending to suddenly go deaf.

In this hectic modern day world people resort to excessive alcohol consumption to cope with stress, depression or lack of employment. This can in turn cause alcoholism, a dreadful condition which can have the unfortunate complication of making you blame alcohol for all the terrible decisions in life you would have probably still made even if you were stone cold sober. This is done through Alcoholics Anonymous where you sit in a circle drinking coffee, eating donuts and smoking cigarettes while telling the story of the time you hit a school bus driving 120 miles an hour, after being reassured that "There are no judgments here".