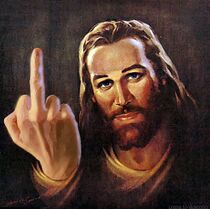 this is what Jesus thinks of liars

A lie is what it is called when one tells the truth in a creative way. Given the usual effects of telling the truth, telling a lie is usually the only way to get people to do what you want them to do.

Professional liars study with a Zen master for ten years to receive a degree, which is called the Master of Business Administration. At the end of this period of study, they realize they could have just told people they had finished the degree without actually having done it.

Lies have a life cycle: half-truth → tall tale → falsehood → porky → white lie → lie → dirty lie → damned lie → France → damned dirty lie → Half-Life 2: Episode 3 → political manifesto → statistics. Statistics are in turn interpreted by pundits and the media to create new lies. When dealing with statistics, one should remember that around 89% of all known statistics are made up. This has of course been proven through statistics.

The advent of quantum physics has changed the modern perception of lie formation. Albert Einstein, in his landmark book Das Kapital, promises:

"A lie is a statement based on a logical discrepancy, which draws energy from its surroundings with the relationship." 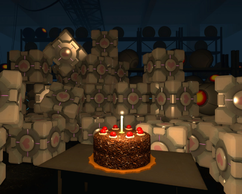 This Is A Cake. It Is a Lie. It always Will Be.

"Where E is the energy, m is the number of people who believed it, g is the weight of the lie, and q is the probability that you are 'not' in a movie (q = 1 - probability you are in a movie). This simple equation gives us insight to the true power of a lie."

A commonly used basic unit of measure describing the number of lies per sentence is the Goebbels or Go.